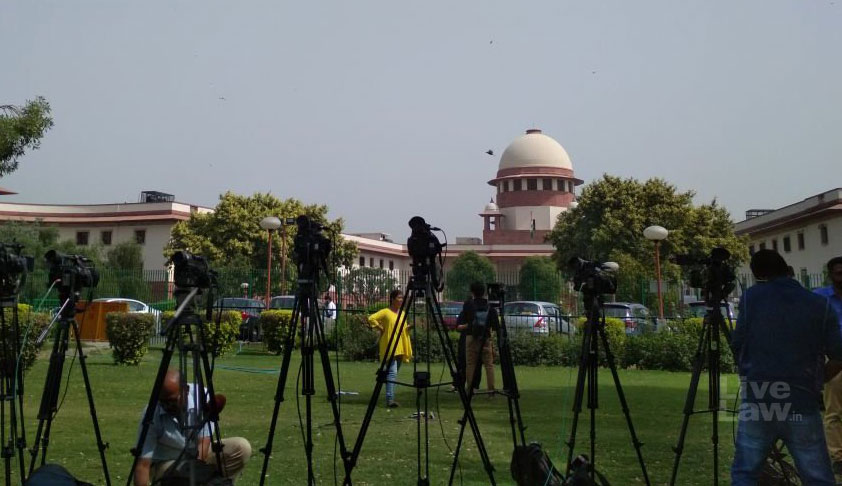 “Reportage of such cases should be done sensitively keeping the best interest of the victims, both adult and children, in mind. Sensationalizing such cases may garner Television Rating Points (TRPs) but does no credit to the credibility of the media.”The Supreme Court, while issuing important directives for protection of privacy and reputation of victims of sexual offences, reminded...

“Reportage of such cases should be done sensitively keeping the best interest of the victims, both adult and children, in mind. Sensationalizing such cases may garner Television Rating Points (TRPs) but does no credit to the credibility of the media.”

The Supreme Court, while issuing important directives for protection of privacy and reputation of victims of sexual offences, reminded media their duty to ensure that it does nothing and gives no information which could directly or indirectly lead to the identity of the child being disclosed.

“No doubt, it is the duty of the media to report every crime which is committed. The media can do this without disclosing the name and identity of the victim in case of rape and sexual offences against children. The media not only has the right but an obligation to report all such cases. However, media should be cautious not to sensationalise the same”, the bench comprising Justice Madan B. Lokur and Justice Deepak Gupta said.

The court further observed that media should refrain from talking to the victim because every time the victim repeats the tale of misery, the victim again undergoes the trauma which he/she has gone through. “Reportage of such cases should be done sensitively keeping the best interest of the victims, both adult and children, in mind. Sensationalising such cases may garner Television Rating Points (TRPs) but does no credit to the credibility of the media.”

Disclosure cannot be made to make child a ‘symbol of protest’

The bench specifically observed that that disclosure of the name of the child to make the child a symbol of protest cannot normally be treated to be in the interest of the child. It said that it would be neither feasible nor would it be advisable to clearly lay down what is the meaning of the phrase “interest of the child”.

They cannot be denied dignity only because they are dead

The court also disagreed with the submission made by Amicus curiae that when the child is dead then the name and identity of child can be disclosed since it is difficult to garner such support for movements ( to get justice for the child)  if the name of the deceased child victim is not disclosed.

“We have to deal with the important issue that even the dead have their own dignity. They cannot be denied dignity only because they are dead.”, the bench added.

The bench also observed that a lot still requires to be done in the matter of setting up of child-friendly courts, as mandated by POCSO Act, to ensure that the child does not get scared on seeing the alleged perpetrator of the crime. It said that there is a need to have courts which are specially designed to be child friendly and meet the needs of child victims and the law. The bench further added that such courts can also be used as trial courts for trying cases of rape against women.

The bench also emphasized on the need to set up one stop centres in every district as soon as possible. It observed that “BHAROSA” in Hyderabad can be used as a model for other one stop centres in the country. The bench said: “These one stop centres can be used as a central police station where all crimes against women and children in the town/city are registered. They should have well trained staff who are sensitive to the needs of children and women who have undergone sexual abuse. This staff should be given adequate training to ensure that they talk to the victims in a compassionate and sensitive manner. Counsellors and psychiatrists should also be available on call at these centres so that if necessary the victims are counselled and in some cases it would be appropriate if the counsellors question the victims in a manner in which they have been trained to handle the victims of such offences. These one stop centres should also have adequate medical facilities to provide immediate medical aid to the victims and the medical examination of the victims can be conducted at the centre itself. These one-stop centres should also have video conferencing facility available where the statement of the victims to be mandatorily recorded under Section 164 CrPC can be recorded using video conferencing facilities and the victims need not be produced in the court of the magistrate. There should be court room(s) in these one stop centres which can be used for trial of such cases. As far as possible these centres should not be situated within the court complex but should be situated near the court complex so that the lawyers are also not inconvenienced. Resultantly, the victims of such offences will never have to go to a court complex which would result in a victim friendly trial”

The court approvingly referred to a Calcutta High Court judgment (Bijoy v. State of West Bengal), in which it had issued directions to ensure that the provisions of the law are followed in letter and spirit, and the fundamental rights of a child victim and other basic human rights are protected.

The court asked the Chairpersons and Members of all the Juvenile Justice Committee of all the High Courts in the country to go through the said judgment and the directions issued and issue similar directions, keeping in view the particular needs of each High Court/State.