Doctors have no right to go on strikes; refusing to attend patients is a serious misconduct: Allahabad HC [Read Judgment] 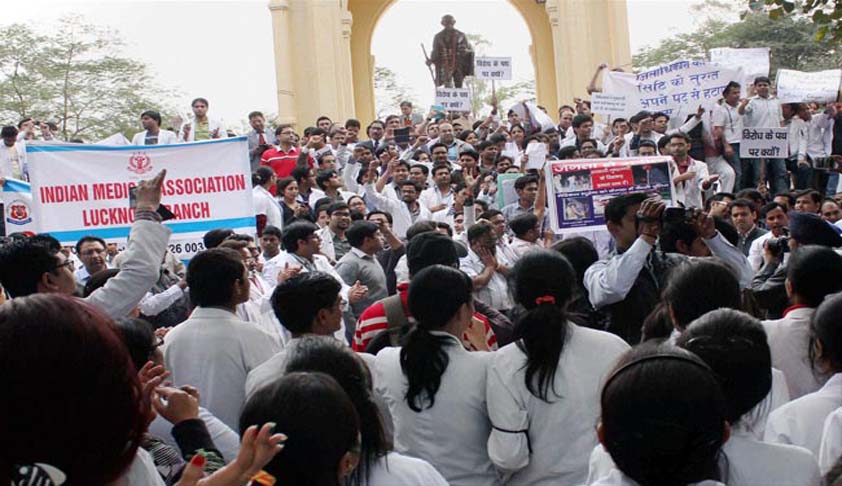 Profession of a doctor is to save life of a patient and not to leave it on the mercy of his/ her destiny by refusing to administer medical treatment to him/ her, the Bench said.

Taking serious note of the strike adopted by junior doctors in State Medical Colleges in the state which resulted in death of a number of people, the Allahabad High Court has held that Doctors have no legal or otherwise right to proceed on strike having effect of denying medical treatment/ administration of medicines, care to ailing people.

Division Bench comprising of Justices Sudhir Agarwal and Rakesh Srivastava, in a PIL moved by a practicing advocate, has also asked the Government to provide compensation to legal heirs of victims who died unattended by the doctors, by paying a sum of Twenty Five Lakhs, which is to be recovered from the salaries/allowances of doctors going on protest/abstention from duty/ strike. The bench also observed that refusing to attend a patient is a serious professional misconduct on the part of doctors and such conduct shall be communicated to Medical Council of India for considering cancellation/ revocation or suspension of license to practice.

REFUSING TO ATTEND A PATIENT IS A SERIOUS PROFESSIONAL MISCONDUCT

The Court said “The paramount fundamental duty of a doctor is to administer treatment to an ailing person and make all endeavour to save his/her life and get him/ her well. If a doctor refuses to attend a patient, prima facie, it is a serious professional misconduct. We can understand that sometimes there may be just and valid causes which may not be acceptable in general to all or some of the doctors, and they may have a right to take steps for redressal of their grievance but those steps cannot include denial or refusal on the part of a doctor to attend his medical duties or treatment of patients. Whatever terminology may be used, whether strike or protest or abstention from duty or anything else but the fact remains that a doctor is bound by his medical oath and also principle of his profession that he or she must attend a patient whenever required and make best possible efforts for his/her medical treatment.Profession of a doctor is to save life of a patient and not to leave it on the mercy of his/ her destiny by refusing to administer medical treatment to him/ her.Whenever doctors individually or collectively proceed to observe strike, protest, abstention from duty etc. the result is that ailing people who may include 2 old persons, infants and other seriously injured, are denied immediate medical attendance and many times due to non-availability of timely treatment, the consequences prove to be fatal. There are cases where even a few minutes delay has resulted in mortality.”

DOCTORS HAVE NO RIGHT TO GO ON STRIKE

Observing that Doctors have no right to strike, the Court said “The doctors, therefore, have no business and we have no hesitation in observing that they have no legal or otherwise right to proceed on strike or any of its different terminology like protest, abstention etc. having effect of denying medical treatment/ administration of medicines, care to ailing people. The doctors if aggrieved by any reason or for any cause, are always within their right to avail such lawful methods as are available for redressal of their grievance but cannot refuse to attend their duties as a doctor. More so when such doctor is employed or working or engaged in any capacity, in an institution directly related with public at large and is under the control of State Government since in such institutions mostly poor and weaker people go to avail medical facilities. Doctors in State Medical Colleges, Government Hospitals and similar other institutions funded by State from public exchequer have no legal or other right to deny to discharge their duties as doctor i.e. administration of medical treatment etc. to the patients. Any such action on their part would be patently illegal and would justify a serious action against them as permissible in law which would include denial of salary or allowance or honorarium etc. as the case may be. Further such activities of abstention, protest, strike etc. amounts to a serious misconduct justifying major penalty and also criminal and tortuous liability if any patient suffer on account of such action of such a doctor.”