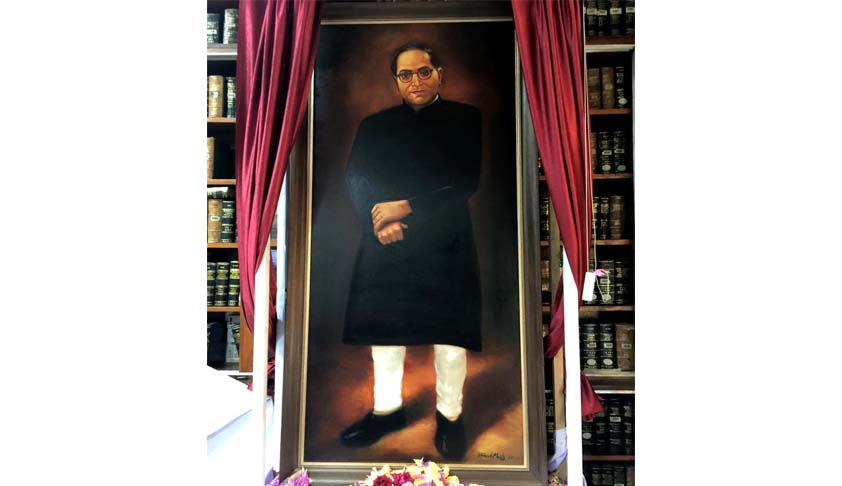 A portrait of Dr. B.R. Ambedkar was unveiled today in SCBA Library-I by Mr. Gopal Gandhi, grandson of Mahatma Gandhi, in the presence of Mr. Paresh Maity, Padma Shri and renowned artist.The function was attended by a large number of members of the Bar. Justice Kurian Joseph also joined the event. The function was also attended by a sizeable number of Senior Members of the Bar, including Mr....

A portrait of Dr. B.R. Ambedkar was unveiled today in SCBA Library-I by Mr. Gopal Gandhi, grandson of Mahatma Gandhi, in the presence of Mr. Paresh Maity, Padma Shri and renowned artist.

The portrait has been painted by Mr. Paresh Maity, who is an acclaimed Indian painter, on the request of the President of SCBA. His works are in a number of collections, including the British Museum, and the National Gallery of Modern Art, New Delhi. He has also painted for Terminal 3 at Delhi Airport, which stretches up to over 850 feet. Mr. Maity, was also conferred with fourth-highest civilian award the Padma Shri, in 2014.

Mr. Dave said that the Nation must be eternally grateful to the Constituent Assembly, the drafting Committee and its Chairman Dr. Ambedkar. He thanked Padmashree Paresh Maity for the portrait. He also elaborated on his choice of inviting Mr. Gopal Gandhi for unveiling the portrait. He said that such a choice was made to “keep politics out of the Bar”. They hence desired a civil society representative to do the honors.

Emphasizing on Dr. B.R. Ambedkar’s contribution to the Constitution of India, Mr. Gopal Gandhi said, “The Congress recognized in Ambedkar one who was not imprisoned by one or the other of its own shibboleths, one or another of its own pressure groups, and who could without any vulnerability to lobbies, move the Constituent Assembly towards a document that would balance the nation’s various needs, sentiments and goals. The balancing of the powers of the President of the Union vis-à-vis the elected Government, the Unionist vis-à-vis Federative aspects of the Constitution, the crafting of the Union, States and Concurrent Lists, were all matters in which his in-born objectivity was crucial, irreplaceable.”

He also expressed a retrospective dream, according to which, Congress should not only have let Dr. Ambedkar leave the Ministry, it should have offered to him, in 1952, the newly-created office of the Vice President of India.

He said that if Dr. Ambedkar were alive today, seeing the religious, communal and economic Right today competing with the rest to mark his birthday, he would have said, ‘Stop this pantomime, there is work to be done.’

He further said, “It is important now to let Ambedkar be accessed as the mental phenomenon that he was, for the whole of India, and not just for that section of its population whose immiserations he sought to remove. It is important that no section of India confines him and, equally, that none refrains from engaging with his open intellect. Speaking for myself, for several years, I thought of Ambedkar as a giant of a man who spoke, as no one else did or could have for Dalit India and who drafted as no one else did or could have, the Constitution of India. These, his twin achievements, I thought were that assured him his place in history. It is only in mid-life when I came to see the range of his works that I realized Ambedkar was a Renaissance figure, no less, who unlocked doors and window fastened not just by sectarian prejudice, but by much more- by intellectual inertia, by mental fatigue and by what can only be called ideational sissiness. To typecast such a man as a spokesman, howsoever formidable, for one section of India alone, for one interest, and one cause, or to label him as the chief architect, howsoever formidable, of one legislative edifice, one enactment, is to deny and impoverish ourselves as his legatees.”