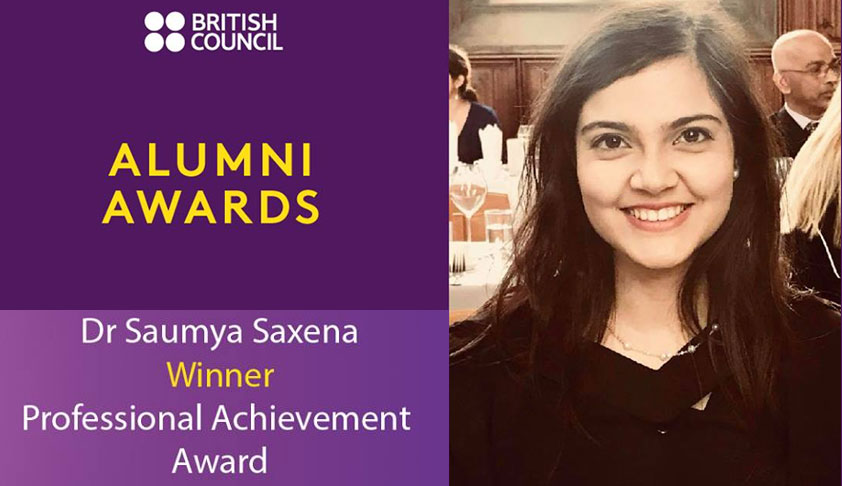 Dr. Saumya Saxena has been conferred with the British Council's UK Alumni Professional Achievement Award for her assistance to the Law Commission of India (LCI) in assessing the feasibility of a uniform civil code.

She has conducted gender sensitization workshops for paramilitary forces such as the CISF, and she speaks frequently at Universities on women’s empowerment, legal aid, and laws relating to marriage and divorce.

She is currently writing two books- one for Cambridge University Press, tentatively titled The Politics of Personal Law: Religion, Divorce and Democracy in Post-Independence India, Cambridge University Press (Forthcoming, 2019), and a second one titled Triple Talaq and the Public Life of Personal Law in Twenty-first Century India, Routledge (Forthcoming, 2019).

As per British Council's website, the Alumni Awards pay tribute to the impact that alumni of UK higher education institutions have had in their chosen field, and how this was sparked by their studies in the UK. Recognizing Dr. Saxena's achievements, the website says:

"Dr. Saumya has assisted the Law Commission in India in the field on possible amendments to personal law codes and assessing the feasibility of a uniform civil code. She has also published extensively on the subject of personal law in newspapers and also has a number of academic publications. Her work with Justice Verma Committee which was set up to revise Rape Laws in India has had an impact on every woman in the country. Dr. Saumya has pursued a Ph.D., Faculty of History from University of Cambridge."