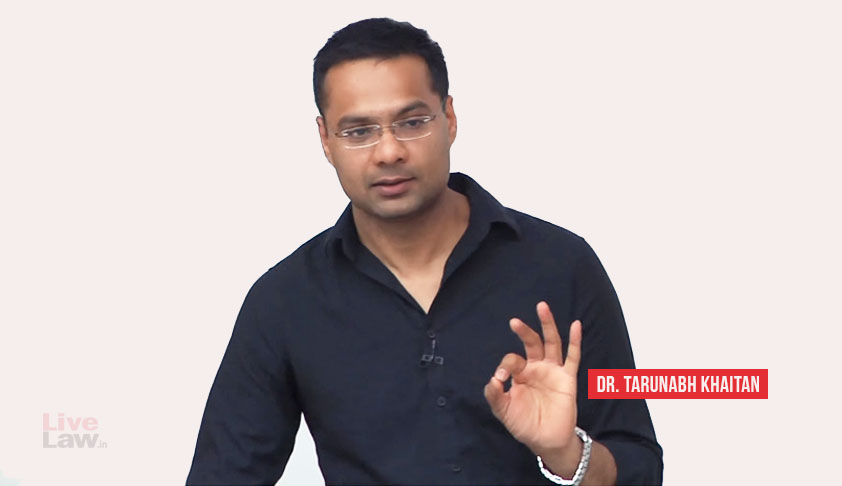 Dr. Tarunabh Khaitan has won the 2018 Letten Prize. The purpose of the prize "is to recognize younger researchers’ contributions in the fields of health, development, environment and equality in all aspects of human life”. It also “aims to raise public awareness of how research can be used to solve global human development challenges”.The prize is a collaboration between the...

Dr. Tarunabh Khaitan has won the 2018 Letten Prize. The purpose of the prize "is to recognize younger researchers’ contributions in the fields of health, development, environment and equality in all aspects of human life”. It also “aims to raise public awareness of how research can be used to solve global human development challenges”.

The prize is a collaboration between the Letten Foundation and The Young Academy of Norway. The recipient is awarded 2 mill NOK (ca. 215 000 EUR/260 000 USD).

Dr. Khaitan is an alumnus of the 2004 batch of NLSIU, Bangalore and a recipient of the prestigious Rhodes Scholarship. After completing his masters (BCL) from Oxford University, he completed his M.Phil and D.Phil from Oxford in 2007 and 2010 respectively. Elaborating on Mr. Khaitan’s suitability for the award, a release by the Letten Prize Committee 2018 said:

“Tarunabh Khaitan (from India) is affiliated with the University of Melbourne and Wadham College, University of Oxford. He works across several disciplines including discrimination law, constitutional law, legal theory, political philosophy, democratic theory, constitutional design, and ethics. In his scholarly activities, Khaitan has brought to the fore the stark and unjust inequalities that characterize present day society, not only in his native India but also in other countries. His engagement extends way beyond his academic publishing: he has been active in mentoring young academics from the global South, and has founded India’s leading academic law journal.  He has written numerous articles for Indian newspapers and actively disseminated his research in other media. His work has had an impact on law in India as well as in Europe and thus on the society at large.

Khaitan will use the prize money to launch an “Indian Equality Law Program” to be hosted at the Melbourne Law School. While focused on India, the Program will surely impact other societies too. Khaitan emphasizes the need to understand and combat the mechanisms that underlie violence against women and LGBTQ persons, as well as the mechanisms that propagate discrimination on the basis of religion, race and caste. The proposed Program focuses on supervision of doctoral students and capacity-building for early career scholars. The Prize Committee felt that this Program holds great promise and that it is very much in the spirit of the Letten Prize.

Khaitan has published two books and numerous articles and book chapters with documented societal impact. His book A Theory of Discrimination Law (OUP 2015) was cited before the UK supreme court and by the European Court of Human Rights. It also informed the Anti-Discrimination and Equality Bill, presented by Shashi Tharoor MP in India’s Parliament.

In sum, Khaitan’s achievements meet all the criteria listed in the call for the Letten Prize. He has conducted groundbreaking research on the root causes of inequality and injustice – research that is undoubtedly of great relevance and that addresses one of the major challenges of present-day society. His work bears on several of UN’s Sustainable Development Goals, not least goal 10 (reduced inequalities) and 16 (peace, justice, and strong institutions). It is clear that his research has had – and will continue to have – an impact across national borders. His research is truly interdisciplinary in nature, and his proficiency in science dissemination is well documented. His work serves as a sterling example of research that combines scientific excellence and rigour with a true social engagement. Tarunabh Khaitan will stand as a worthy recipient of the Letten Prize 2018.”