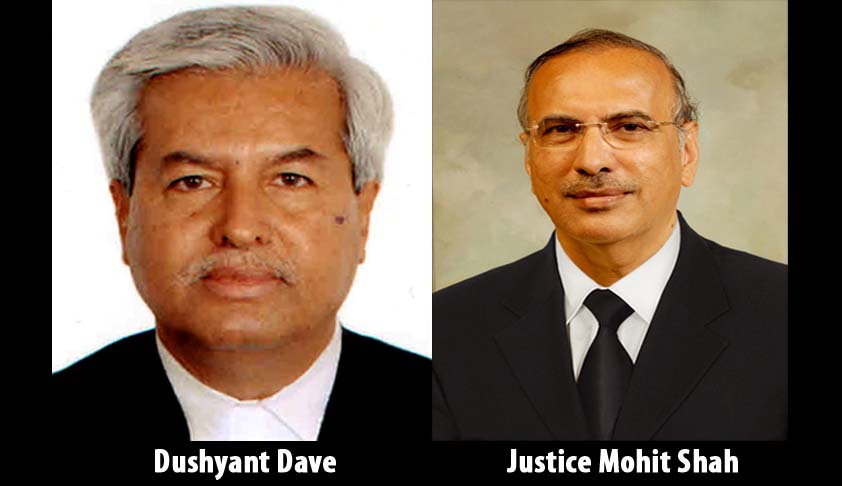 In two strongly worded and impactful letters addressed to the Chief Justice of India H.L. Dattu, as reported by Bar and Bench, Senior Advocate and the President of the Supreme Court Bar Association Dushyant Dave has opposed the proposed elevation of Chief Justice of Bombay High Court, Justice Mohit Shah to the Supreme Court.The letter dated 6th February, 2015 highlights the high regard of...

The letter dated 6th February, 2015 highlights the high regard of the responsibilities that have been entrusted to the collegium system while appointment of Judges, in view of the judgment of the apex Court in the case of Supreme Court Advocate on Record Association v. Union of India, [1993] 4 SCC 441.

He then expressed his disapproval of the elevation stating, "Yet, it is being rumored that the Collegium is likely to consider the case of Chief Justice Mr. Mohit S. Shah. Sirs, presently there are many outstanding Judges available in various High Courts including Hon'ble Chief Justices with legal ability, fearlessness and impeccable personal conduct. Some of them left large and lucrative legal practices to becomes Judges and have been waiting in the wings for being elevated. I need not name them because they are well known to Your Lordships as also the entire Legal Community."

"It is well known that Chief Justice Mr. Mohit S. Shah has been considered by the Collegium on more than one occasion and rejected on account of, amongst other things, serious and improper personal conduct and personal traits. His conduct was wholly unbecoming of a Judge and affected both his "professional duties" as a Judge and administrator (as a puny Judge, as a Collegium member and as the acting Chief Justice). But most of all this lowered the image of the Judiciary of Gujarat to a great extent. Thus, Chief Justice Mr. Mohit S. Shah forfeited his right to be considered for Higher Judiciary long ago on account of his own conduct."

In view of these facts, he urged that the material considered against him by the earlier collegiums should be made public in larger good of the Judiciary and the Nation.

According to him, reconsideration of the Chief Justice would "not only be contrary to the Constitutional Bench Judgment" but "would be grossly improper and will seriously impact the reputation and goodwill" of the Supreme Court.

He alleges that the trial of BJP leader Amit Shah in the Sohrabuddin fake encounter case, the Bombay High Court, with Justice Shah as the Chief Justice did not follow the mandate of the Supreme Court that the "trial should be conducted from beginning to the end by the same officer".

The letter asserts that, "the Learned Trial Judge was changed on one pretext or the other three or four times without seeking leave of this Hon'ble Court. Ultimately, what happened is well known. I am not on merits of a Judicial Order that may have been passed in favor of Mr. Amit Shah, but on the act of commission or omission on the part of Chief Justice Mr. Mohit S. Shah as Head of the Bombay High Court. Any reconsideration at this stage of his case would perhaps raise serious and justifiable doubts in the minds of right thinking citizens. It is one thing for the political establishment to reward a Judge by offering him the Governorship but it is entirely different for the Collegium to do so. I respectfully request that this ought to be avoided in larger interests of the Judiciary."

He then followed it up with another letter yesterday, with additional events supported by judicial record, with raise "extremely discomforting questions about the judicial conduct of Chief Justice Mohit Shah".

He brought to the attention of the CJI, Justice Shah's questionable conduct in the case of Gujarat High Court by Essar Oil Ltd. and Ors. vs. State of Gujarat and Ors. According to the letter, the case was initially heard by a Bench presided by Justice Shah and notice issued by the same Bench. After the roster for allocation of matters changed, the subject matter of the above Writ Petition was to be heard by a Bench presided by the then Chief Justice Y.R. Meena and Justice J.C. Upadhaya.

The letter however alleges that the matter was transferred back to Chief Justice Meena's Bench through an affidavit filed by Essar, falsely claiming that the matter had already been heard and disposed of on February 19, 2008 by the Bench headed by Justice Shah. In the meantime, Essar also filed a civil application before the Bench presided by Justice Shah. Justice Shah passed an order on this Civil Application on February 28, 2008 directing that the main matter be listed before the appropriate Bench.

Justice Meena then took note of this incongruity in the affidavit filed by Essar, noting that he could not find any such judgment passed on February 28, 2008. However, the matter was remanded by to the Bench presided by Justice Shah in order to "avoid further controversy".

Raising six questions about the controversy, Advocate Dave requested the CJI to reconsider the elevation, "in the interest of the entire judiciary and the dignity of the Supreme Court of India".