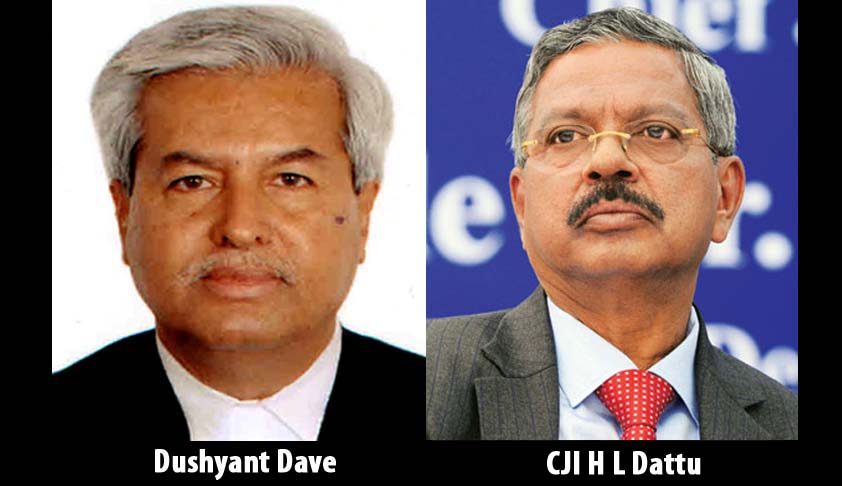 Senior Advocate and President of Supreme Court Bar Association has written a letter requesting the Chief Justice of India H.L. Dattu, against sudden listing of matters in the Supreme Court. The lawyers are generally unhappy about the new system of listing of matters introduced by the Chief Justice. Mr. Dave has pointed out that if such a system is followed, contrary to traditions, it would...

Senior Advocate and President of Supreme Court Bar Association has written a letter requesting the Chief Justice of India H.L. Dattu, against sudden listing of matters in the Supreme Court. The lawyers are generally unhappy about the new system of listing of matters introduced by the Chief Justice. Mr. Dave has pointed out that if such a system is followed, contrary to traditions, it would lead to intensified agitation.

I am constrained to write to you on account of extra ordinary situation which has arisen regarding the subject matter. The Bar is greatly disappointed and shocked at this turn of events. In last couple of weeks, tons of Members of Bar have approached me, especially Advocates-on-Record, bitterly complaining on the issue. The matters are being listed sometime overnight, which ought not to be listed especially for final hearings.

These matters are mostly “Admitted matters” wherein the Hon'ble Supreme Court was pleased to grant Leave, quite some time ago, after being satisfied on the merits for such grants and upon hearing both sides. These matters have to be dealt with accordingly and not in the manner in which Fresh/Miscellaneous matters seeking Leave are dealt with.

It has been an established practice of this Court to have a Terminal List, at the beginning of the year, indicating final hearing matters to be taken up, followed by Weekly List, clearly informing Members of the Bar, well in advance about these matters.

This practice has worked to the satisfaction of both the Bench and the Bar. Members of the Bar get sufficient time to contact clients, sometimes long lost, in far flung areas of the Nation. Further, Members get sufficient time to prepare themselves and in given cases engage Seniors or other arguing Counsels. There has been no justifiable reason to make a departure from this system. After all every institution is built upon traditions.

Sir, although this matter has been brought to your kind attention and you have also kindly agreed to accommodate the Bar during our personal meeting, as also through Registry Officials, the problem persists.

Even today, several Advocates and Advocates-on-Record met us and complained about what happened in various Courts including Court No.1, yesterday in several matters, which were listed at the nth hour and in which despite requests, they were not accommodated, leading to disposal of many such matters.

Sir, this results in not only denial of Justice to litigants including governments, but also leaves a bad mark on the conduct of the lawyers. Litigants would feel betrayed that they were not informed in time. If governments are clients, the Advocates-on-Record would be looked down with suspicion. There is a serious issue as to credibility of the Institution and those of us working in it.

Sir, the Members across the Bar are deeply anguished and agitated. I fear that if the situation is not addressed amicably, this agitation will intensify. I would sincerely urge you to address this and resolve it to the satisfaction of all concerned in the same way as your have done with some other issues about the Bar. Sir, your approach has been positive in those areas and I urge you to look at this positively. I am away over the weekend, but I will be happy to meet with you on Monday to discuss it personally.