Employer (State) Should Give Plausible Reason For Not Filling Up Posts With Selected Candidates, Holds SC By 2:1 Majority [Read Judgment] 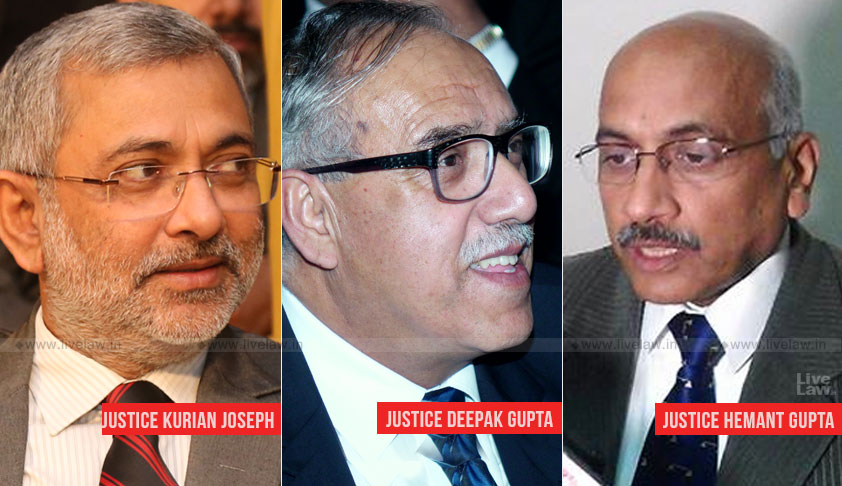 ‘When the employer is the State it is bound to act according to Article 14 of the Constitution. It cannot without any rhyme or reason decide not to fill up the post. It must give some plausible reason for not filling up the posts.’

The Supreme Court has observed that when a large number of posts are lying vacant and selection process has been followed, then the employer must satisfy the court as to why it did not resort to and appoint the selected candidates, even if they are from the replacement panel.

A three-judge bench comprising Justice Kurian Joseph, Justice Deepak Gupta and Justice Hemant Gupta was considering appeals (Dinesh Kumar Kashyap vs. South East Central Railway) filed by candidates who were not appointed despite they being in the select list (replacement panel) published by South East Central Railway. The Central Administrative Tribunal and the high court had rejected their pleas.

The majority in the bench, Justice Kurian Joseph and Justice Deepak Gupta, observed that justification for not filling up posts must be reasonable and should not be an arbitrary, capricious or whimsical exercise of the discretion vested in the state.

Justice Deepak Gupta said: “Our country is governed by the rule of law. Arbitrariness is an anathema to the rule of law. When an employer invites applications for filling up a large number of posts, a large number of unemployed youth apply for the same. They spend time in filling the form and pay the application fees. Thereafter, they spend time to prepare for the examination. They spend time and money to travel to the place where written test is held. If they qualify the written test they have to again travel to appear for the interview and medical examination etc. Those who are successful and declared to be passed have a reasonable expectation that they will be appointed. No doubt, as pointed out above, this is not a vested right. However, the State must give some justifiable, non-arbitrary reason for not filling up the post.”

The bench further observed that when the employer is the state, it is bound to act according to Article 14 of the Constitution and it cannot without any rhyme or reason decide not to fill up the posts. It must give some plausible reason for not filling up the posts.

Examining the factual aspects, the bench allowed the appeals and held that the state failed to give any cogent reason to justify its action of not calling for candidates from the replacement list of extra 20 per cent candidates. It also directed the state to appoint eligible appellants within a period of 3 months.

Justice Hemant Gupta dissented with the majority judgment and observed: “The State has right not to fill up any vacancy advertised. The stand that the requirement to fill up 624 vacant posts was not felt cannot be said to be arbitrary warranting a mandamus to appoint the appellants. The State cannot be directed to appoint candidates, when it does not require the posts to be filled up. The decision not to fill up vacancies has been taken for appropriate reasons and is neither arbitrary nor discriminatory.”

The judge observed that these candidates at best can be said to be the candidates in the waiting list of the candidates to be called for appointment if the selected candidates do not join for one or the other reason. Referring to various decisions, the judge said that the state has a right not to appoint a candidate even if his name appears in the merit list.