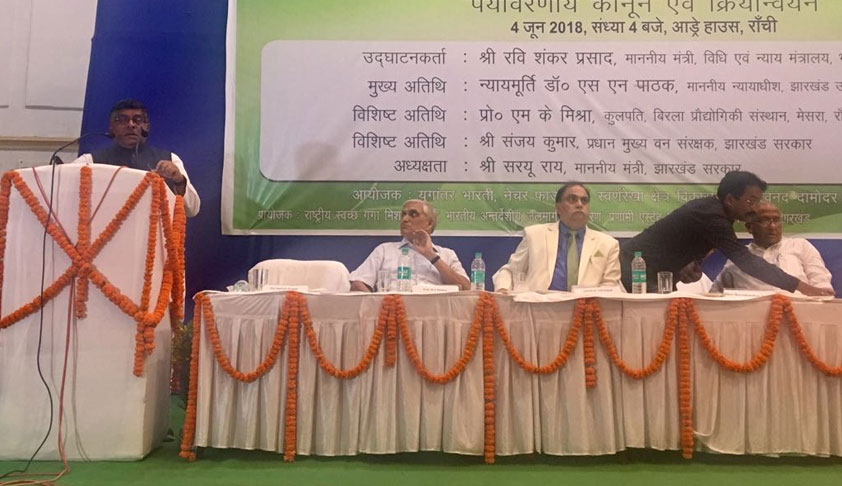 Union Minister for Law and Justice Ravi Shankar Prasad on Monday said environment laws were still evolving in India, adding that without people’s participation, a host of environment laws of our country would not be enough to save Mother Nature.

He added judicial intervention is needed to protect the environment at times. Judiciary could be helpful in striking a balance between development and conservation. The minister was speaking at an environment fair held at Audrey House in Ranchi.

"Justice is not equivalent to ‘nyay’. Justice is merely the resolution of disputes between two parties. Nyay is much more comprehensive. The decision on environmental laws should be acceptable to all,” he said.

The Law Minister also opined that people’s habits in some aspects must change. “There should be rethinking whether we should immerse idols in rivers and also throw materials used in ‘pujas’ in ponds,” he said.

Prasad said people should get power and other basic facilities like road and opportunities to grow.

The Union Minister said there were several conventions depicting high respect for the environment since ancient times. The Vedas described the Earth as mother and the human her son, he said.

Justice SN Pathak said there were over 200 rules related to the environment but there was lack of effective enforcement of laws. He stressed on the stringent implementation of laws and increasing awareness among the people in this regard.

Jharkhand’s minister Saryu Rai, vice-chancellor of Birla Institute of Technology-Mesra Professor MK Mishra and Principal Chief Conservator of Forests Jharkhand Sanjay Kumar were among the other speakers in the function.