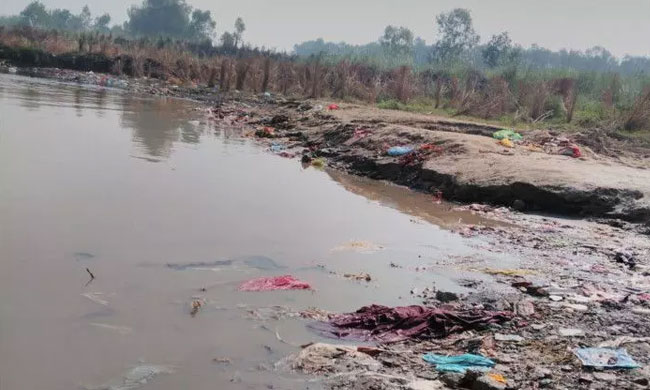 The NGT Principal Bench has directed the UP State authorities to stop the illegal and unscientific disposal of e-waste on the banks of Ramganga River, a tributary of the Ganges, in Moradabad, UP.

The Bench headed by Chairperson Justice Adarsh Kumar Goel said that any dismantling or recycling of e-waste must take place as per the Hazardous and Other Waste (Management and Transboundary Movement) Rules, 2016.

A plea was filed activist Mahendra Pandey to draw attention of the NGT to the pollution being caused by e-waste processing, which was leaving the residue 'milled black powder' at the banks of the Ramganga river. It was pointed out that keeping such powder open on the bank of the river was contaminating it with heavy metals, including mercury.

It was observed that the same issue was considered in another matter - M.C. Mehta Vs. Union of India & Ors. wherein a committee headed by District Magistrate, Moradabad, and comprising of officials from offices of the Secretary of UP, UPPCB, Irrigation Department of the UP Govt., Jal Nigam, Moradabad, Muradabad Municipal Corporation, Nagar Nigam Muradabad and DSP of the concerned area, was constituted. The Committee had the responsibility to ensure removal of hazardous waste generated due to e-waste from the banks of river Ram Ganga, and to dispose of the waste strictly in accordance with Hazardous Waste Rules.

However, the Tribunal found that no action had been taken even after the Tribunal's orders in the MC Mehta case, and a fine of Rs. 10 lakhs was imposed on the UP Government for environmental compensation. The CPCB was directed to prepare an 'Action Plan' for remedial measures. The Bench had issued directions to the District Magistrate to take steps for the temporary storage of such hazardous waste in consultation with UPPCB and CPCB. Further, the Bench had also asked for construction of properly designed protection of embankments around the landfill, till any other viable solution was found.

After the NGT's orders, a report of joint inspection carried out by the CPCB and UPPCB was submitted. The report found the water sample showing the level of mercury, and presence of heavy metals such as copper and chromium, exceeding the screening values by many folds. The contamination was attributed to illegal processing of e-waste by the local population. Following the perusal of the report, NGT directed the District Magistrate to take steps for setting up temporary Treatment, storage, and disposal facilities (TSDF).

The Bench considered the compliance report of the District Magistrate, and found that practically nothing substantial had been done since the last order was passed. The NGT in its July 2018 order, directed the Chief Secretary of UP to closely monitor the situation and take appropriate steps in the matter. The Tribunal had also warned at the possibility of a direction for prosecution of the concerned officers, in case of failure on part of district to protect public health.

After repeated failures and rebuke of the Tribunal, a compliance report stated that the District Magistrate had reviewed the situation and a site was earmarked for temporary storage of the hazardous waste as per the guidelines and protocols prescribed by the CPCB. It was decided that TDSF would be set up in District Amroha, and timelines were laid down for different steps to be taken as per an 'Action Plan' prepared under the close monitoring of the Chief Secretary. "The Action Plan with timelines is in two stages. Stage-I provides for temporary storage and Stage-II provides for permanent treatment and disposal in TSDF", the State authorities submitted.

When the matter came up in the last hearing, the compliance report of the Chief Secretary's Action Plan was reviewed and the Bench was assured that temporary storage has been ensured and steps were being taken for permanent disposal in TSDF at Amroha, and the whole process will be completed in 3 months.

In view of the last status report, NGT Principal Bench has reminded the UP State authorities to stop any illegal dismantling of e-waste. The Bench also stressed upon the need for any dismantling or recycling to be done in accordance with the Rules.

In addition, the NGT has asked for its direction in this matter to be circulated by CPCB to all concerned and file status of compliance in pending matters dealing with e-waste or other hazardous waste. The Tribunal has called for a final compliance report to be filed before the next date.

The matter will be next heard on 12.02.2020 for further consideration.