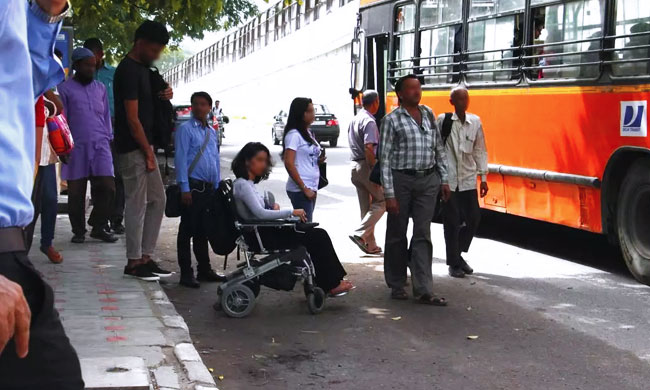 The Delhi High Court has issued notice in a PIL seeking the court's assistance in directing the State authorities to construct footpaths with assistive pathways for the blind and specially-abled individuals, and to ensure proper upkeep of the footpaths in the NCT of Delhi.

The plea was filed by law aspirants Prateek Sharma and Diksha Singh from Delhi University, and calls for an action to be taken against the encroachment by shop owners and, for removal of any blockades or any kind of debris. It further prays for an effective enforcement of regulations, so as to restrict the parking of vehicles on footpaths, and deter motorists from using them as roads.

It was mentioned that the encroachment by shop owners and local vendors has left no space for the pedestrians, compelling them to commute by walking on the roads, which further endangers their safety. The petitioners pointed out that the footpaths created by civic bodies are either damaged, or have not been reconstructed due to jurisdictional issues over repair and reconstruction, therefore obstructing the free movement of pedestrians.

The plea refers to the physical injuries even leading to fatalities, caused due to the lack of proper signage, uncovered potholes and poor lighting on the footpaths. The need for making the footpaths easily accessible by disabled people was also urged for.

The petition states that an RTI complaint was filed with the Central Public Works Department (CPWD), but no response to the same was received. Representations made to the Commissioner, New Delhi Municipal Corporation (NDMC) and Chairperson of NDMC, but these were also not replied to. A letter was sent to the Public Works Department (PWD), to which the Department replied with a query asking the petitioners to point out the specific problem areas. The petitioners say that a detailed answer was given to the PWD's query, however no action was taken on the same.

The petitioners have relied upon the provisions of the 'The Rights of Persons with Disability Act, 2016' which requires the Central Government, and appropriate Governments, to formulate measures to ensure the unhindered movement of disabled citizens, after proper consultation. It was also urged that the impediment on movement is a violation of article 19 and 21 of the Constitution.