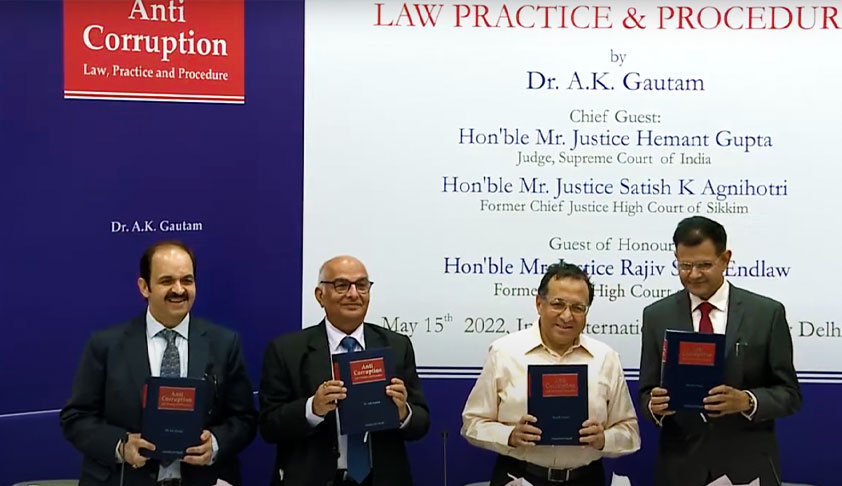 The book launch of Dr. AK Gautam's "Anti-Corruption: Law, Practice and Procedure" was held at the India International Center in New Delhi on May 15th 2022. The book succinctly and systematically depicts the evolutionary statutory growth and history of the Prevention of Corruption Act 1988. The book deals with in-depth legal aspect of practice and procedure adopted by investigating agencies and law enforcement authorities while probing into corruption claims and claims of disproportionate assets made against officials. A resource commentary for all the stakeholders involved in the fight of eradication and prevention of corruption is also part of the book. The book clarifies in a pellucid manner the complexities, intricacies, niceties and nuances of the law, practice and procedure relating to the investigation and prosecution of anti-corruption matters. The author is a Criminal Lawyer who handles Corruption cases in various courts including the Delhi High Court and has 37 years of experience as a Public Prosecutor. The event saw speeches on Anti-Corruption made by the Guest of honor Justice Rajiv Sahai Endlaw, former judge at the Delhi High Court and Chief Guest Justice Satish K. Agnihotri, former Chief Justice at the Sikkim High Court. Justice Hemant Gupta, Judge Supreme Court of India shared a written message with the audience wherein he congratulated the author and publisher for bringing out a book that deals with this important issue that is plaguing societies across the world. The event concluded with a vote of thanks delivered by Shri Vinay Ahuja, Managing Director of Mohan Law House publishers.

Justice Endlaw noted the societal need and necessity of a book on Anti-Corruption laws. He started his speech quoting excerpts from the Introduction to the book, written by Supreme Court Judge Justice Hemant Gupta. He appreciated the magnanimous effort that goes into writing a book, and in sparing time from one's vocation to pen down such a treatise to contribute to the academic discourse. Justice Endlaw was notably the judge that authored the 2016 Delhi HC judgement in the DU photocopy case which found that copyright is not an inevitable, divine, or natural right.The landmark judgment stated that University selling photocopy of books for use by students come under the ambit of exception granted under section 52(1)(i) of the Copyright Act that allows the reproduction of material for educational purposes. He quoted Justice Gupta again in his conclusion stating "Corruption is a menace, like a termite it makes the entire political and social system hollow from within".

Justice Agnihotri started his speech noting that "Corruption is a behemoth that destroys the vitals of a happy progressive society". The global movement against corruption was highlighted taking example of the UN Convention against Corruption 2003, the only legally binding universal anti-corruption instrument, that was ratified by India in 2011. Corruption, Justice Agnihotri notes is omnipresent in today's society; everything from water bills to electricity notices get hampered due to this menace. Conversations around corruption often get limited to the prosecution of the corrupt individual with little focus on the asset recovery to the public. Justice Agnihotri urged the author and the audience to engage more in such unexplored aspects of corruption laws. Low-income countries are often subjected to a higher scale of corruption than high income territories. The links behind corruption and happiness index was drawn to substantiate why India stands at the 136th position in the Index. He notes that the legal fraternity has a responsibility to build a clean, accountable and transparent system by introducing the highest standard of integrity to block entry points.