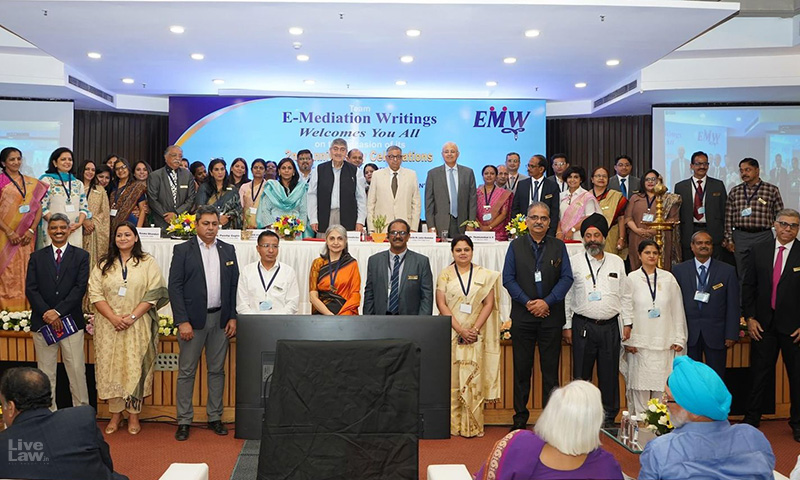 The occasion marked the 2nd Anniversary of EMW, a pandemic baby, nurtured by a team of mediators/advocates as its coordinators from 32 States/UTs of India.

At the inaugural address, the Chief Guest, Justice Sanjay Kishan Kaul, Judge, Supreme Court of India released India's 1st Book in Hindi, on Mediation titled "Madhyasthata Sankalan", an initiative of Team EMW. Justice Kaul highlighted the transformation he felt in his own temperament and approach in dealing with cases in court, after attending training. Justice Kaul believes that even the government officers and bureaucrats would benefit if the government wants to reduce litigation against their departments,

Justice Aniruddha Bose, Judge, Supreme Court of India, in his special address, said there is a need to take mediation to business houses which would help in reducing the heavy docket of the court. He gave the example of the US where litigation was reduced by more than 50 % due to disputes being referred to mediation before litigating in court.

Quoting the phrase "When the going gets tough, the tough get going" Justice Manmohan, Judge, High Court of Delhi, while releasing the special 16th Edition of E-Mediation Writings e-magazine on Gender Bias issues in Mediation, said, EMW was born in adversity (during the lockdown of COVID19 pandemic), so undoubtedly holds a great future ahead and also observed looking at the women participation in the conference, that in mediation gender bias seems to be in in reverse.

Pusshp Gupta, Advocate Supreme Court and also Coordinator-in-Chief, EMW, in her address at the inaugural ceremony, conveyed gratitude to the Judges of the country for motivating and supporting mediation acceptability in India and how in present times 'next date of hearing' is in fact 'a next date of listening' in the Courts and same is reflected in the Orders/ Judgements of the Judges and the referral Orders. She also requested the authorities to include Online Mediation Training in the 40 Hours Mediation Training Course.

A panel of speakers across borders from the Chartered Institute of Arbitrators, Mediators from US, Nepal, Thailand, Oman, Singapore and India discussed the need to harmonise rules. A former Indian Supreme Court judge and presently Judge of the Singapore International Commercial Court, Justice Sikri, who is also on the Board of "Mediation Beyond Borders International" shared his vision of harmonizing the vocabulary of mediators while keeping the cultural connect.

The last panel discussion looked beyond the basic 40 hours training of mediators and the need for continued professional development. The best of the minds as mediators and trainers like Justice Dr. Sudhir Kumar Jain, Judge, Delhi High Court, Senior Mediators - Mr. A.J Jawad, Ms.Veena Ralli and Dr. Aman Hingorani, expressed their concerns after the mediation law is enforced.

The Valedictory speech was given by Justice Siddharth Mridul, Judge, Delhi High Court, and gracing the event was Justice Jyoti Singh, Judge, Delhi High Court. They gave the "Scroll of Honour" to the EMW pan-India Coordinators, Certificates of Participation to the EMW GenNxt Law Students from all over India, who took online mediation classes and applauded the EMW platform which connects mediators in India and abroad.

Mr. Murari Tewari, Chairman, Bar Council of Delhi, as a special guest of the event, presented Appreciation Award to the Mentors and EMW GenNxt Peace-Builders.