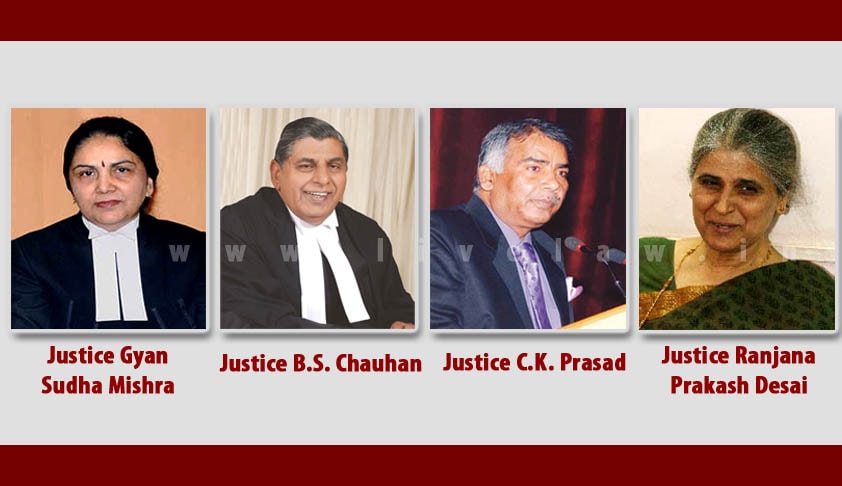 In a welcome move, the Department of Personnel and Training has provided a complete list of Lokpal aspirants, complying with a CIC verdict on an appeal filed by RTI activist, Mr. Subhash Chandra Agrawal. The list includes four Apex Court Judges: Justice Gyan Sudha Mishra, Justice B.S. Chauhan, Justice Chandramauli Kumar Prasad and Justice Ranjana Prakash Desai. They have been nominated by...

In a welcome move, the Department of Personnel and Training has provided a complete list of Lokpal aspirants,

In an Emailed response to LiveLaw, Mr. Agrawal expressed his elation with the DoPT response and wrote, “Department of Personnel & Training (DoPT) deserves compliments for complying with CIC-verdict dated 10.12.2015 in appeal-number CIC/CC/A/2014/000335/SB by providing list of aspirants for Lokpal, rather than challenging CIC-verdict in the court. Central Information Commission also has proved its autonomy through its esteemed verdict on the important aspect.”

“Supreme Court has recently accepted DoPT argument to include aspirants listed for post of Central Information Commissioners subsequent to advertisement for the post after BJP government coming into power, because DoPT argued that earlier lists of during UPA regime had become irrelevant because of many aspirants of earlier lists might be no longer interested or lost eligibility. Same argument should hold good in respect of old list of UPA regime for Lokpal aspirants. Moreover there can be aspirants who might have become interested after BJP government having come into power. DoPT should invite fresh applications for post of Lokpal,” he added.

The quest began with Mr. Agrawal filing an application on April 21, 2014 under the Right to Information Act, 2015 with the Central Public Information Officer (CPIO), DoPT, seeking information on 18 points relating to selection of Chairman and Members of Lokpal.

Not satisfied with the CPIO’s point-wise reply, Mr. Agrawal had then filed an appeal before the First Appellate Authority, contending that the information has been denied by the CPIO on several points by misrepresentation of different sections of the RTI Act, 2005. The CPIO’s reply was upheld by the FAA.

However, Mr. Agrawal remained persistent and filed an appeal before the Commission. The CPIO had contended before the Commission that the information sought related to personal information of people who had applied or have been nominated by different authorities as Chairperson and Members of Lokpal, the disclosure of which had no relationship to any public interest and would cause unwarranted invasion of privacy of individuals.

Mr. Agrawal had however averred that disclosure of the information would service a larger public interest and the public interest would outweigh any possible harm due to invasion of privacy of the individuals. He had submitted that such disclosure would ensure that only the right type of people apply for the post and in case any undesirable person has applied for the same, the information could be brought to the notice of the competent authority. According to him, this would enhance public confidence, especially if the relevant information relating to the capabilities of the applicants is also brought to the notice of the Selection Committee.

Directing the disclosure of information, Information Commissioner Sudhir Bhagwava had observed that what Mr. Agrawal sought was not personal details of a third party. Rather, he sought names of those who had applied for the post of Chairman/Members of Lokpal, in response to DoPT’s advertisement. “Thus, there should not be any unwarranted invasion of privacy by disclosing the names of the candidates who had applied for the said posts,” he had said.

The CIC had further observed, “It is only when the names of the candidates for such sensitive post are disclosed that the public can bring up various facts, which may or may not have been disclosed by the candidates, to the notice of the Selection Committee. This would enhance public confidence in the selection process. Moreover, it is desirable that the entire selection process should be transparent.”

Directing the CPIO to provide the information sought by Mr. Agrawal free of cost within four weeks, the CIC had ruled, “The Commission is, hence, of the view that disclosing the list of names of persons who had applied for Chairperson of the Lokpal, Members of the Lokpal (Judicial and non-Judicial) would enhance transparency and accountability in the appointment process.”