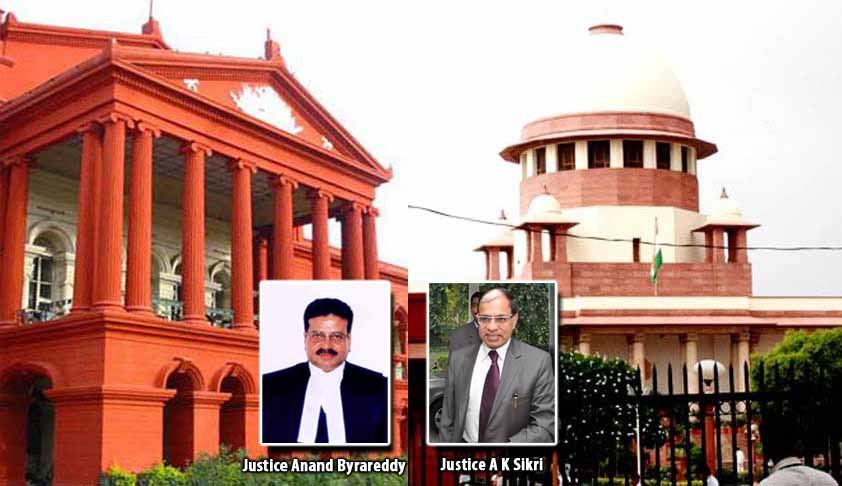 In a rare event of its kind, Justice Anand Byrareddy of the Karnataka High Court has refused to follow dictum laid down in an apex court judgment, widely opined as per incuriam, wherein his own judgment was upheld by the Supreme Court.

Justice Byrareddy, in his judgment dated 21st May, 2013, in M.K. Aiyappa vs State, held that a special judge / magistrate cannot refer a complaint for investigation under S.156(3) of the Code of Criminal Procedure against a public servant without a valid sanction order from the government. His judgment was upheld by a Supreme Court Bench of Justice K.S. Radhakrishnan and Justice A.K. Sikri in Anil Kumar vs M.K. Aiyappa, dated 1st October, 2013.

Also Read: Need for Sanction before passing an order for investigation u/s 156(3) of the Criminal Procedure Code, 1973 By Justice UL Bhat

In a judgment dated 6th September, 2016, in L.Narayana Swamy vs State of Karnataka, a two-judge Bench comprising Justice A.K. Sikri and Justice N.V. Ramana has re-iterated the view in Anil Kumar case and held that a magistrate cannot order further investigation against a public servant without previous sanction of Government.

Interestingly, in a judgment dated 8th September 2016 in N.C Sivakumar Vs State, Justice Anand Byrareddy, while referring to Anil Kumar case, observed that the said judgment had ignored settled principles established by earlier judgments of the apex court, rendered by larger benches. Holding that a private complaint against a public servant need not be accompanied by an order of sanction, the judge observed as follows:

“Incidentally, the apex court has affirmed the order passed by the undersigned in the above case of M.K. Aiyappa. But in retrospect, it is seen that the settled legal position is that when the court merely refers the complaint for investigation, the court does not take cognisance, the need for a sanction is not warranted. The bar is for the court to take cognizance without a sanction and it cannot be construed that even the very receipt of a complaint is barred.”