Exclusive: Not One Bad Robe Should Be Allowed To Tarnish Judiciary - A Letter Written By Justice Krishna Iyer To CJI On Dinakaran Issue, But Still Relevant 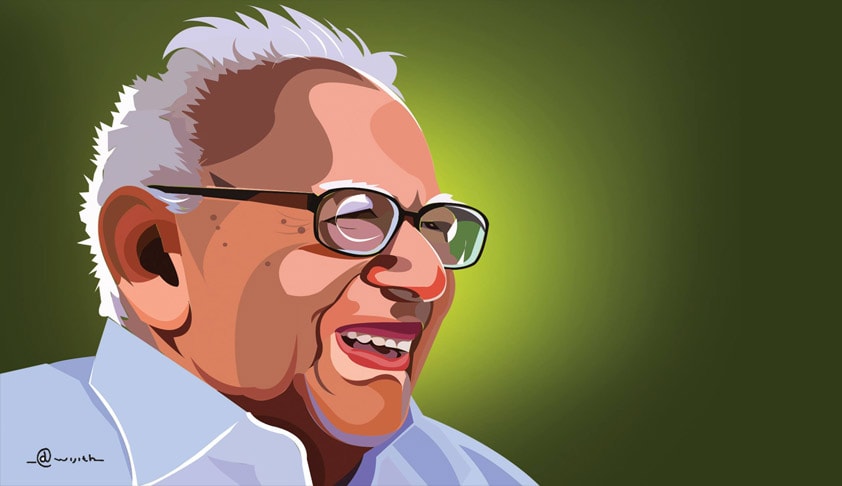 DUBIOUS DINAKARAN ENIGMA—AN EVENT AND A PORTENTI do not know Justice Dinakaran personally and have nothing for or against him.  I use his name based on the resolution of the Madras Bar about him and the letter of the great Advocate Nariman and other illustrious names.No civilized society can command people’s confidence if the Judicature’s verdict is privately purchased at a...

I do not know Justice Dinakaran personally and have nothing for or against him.  I use his name based on the resolution of the Madras Bar about him and the letter of the great Advocate Nariman and other illustrious names.

No civilized society can command people’s confidence if the Judicature’s verdict is privately purchased at a competitive price. The functional fundamental of the judicial instrumentality is indubitable since the court controls corrects or quashes however high the Executive and even sets aside resolutions of the Legislature if it acts contra-constitutionally but when the judges turn obliquely friendly to graft and addicted to delinquence or noxious to negotiate their judgments violating the basic structure and values of the Constitution the System suffers a syndrome of administrative chaos or functional anarchy.  Therefore if the Constitution is not to seppuku the quality, integrity, egalite and commitment to human rights of the rich and poor alike, judges must undergo the most exacting public examination, investigation and impregnable methodology subject to invigilation into their character and antecedents, company, habits, economic class and social philosophy and personal and private life.

If the Bench is powerful, sensitive, prompt or probus the system of government will be straight and just.  Beyond doubt, the appointment of judges especially to the higher courts is of great concern to the Public.  The bar is the professional nidus for recruitment to the Bench.  The administration of justice will be functionally fair if the cadres are selected with a sharp eye on integrity social philosophy, legal acumen, jurisprudential grounding are sound and good as an instrument to implement our Republic values of socialist, secular, democratic egalitarian administration.

The above imperative desiderates a scientific approach to the selection process.  Even a peon or Class IV servant or security guard is selected on the basis of specific criteria and settled principles.  But a strange phenomenon has crept into the system by an extra-ordinary eccentricity of a large bench of the Supreme Court in an ambition to snatch power motivated as if the higher courts are to be the creation of favourites relations, relatives and other extraneous considerations without reference to the public or scrutiny by known standards of merit, high integrity and class-bias.

The judges have other motives for decision, outside their own arbitrary will, beside the commands of their sovereign.  And whether those other motives are, or are not, equally compulsory, is immaterial, if they are sufficiently likely to prevail to afford a ground for prediction.  The only question for the lawyer is, how will the judges act? These motives may consist of, “institutions of public policy”, “inarticulate instincts”, “a preponderance of feeling” arising out of previous antecedents of the judge, or “even the prejudices which judges share with their fellowmen”. (Oliver Wendell Holmes Jr.)

The collegium is a creature of a judicial precedent.  It has no constitutional foundation; indeed it is opposed to what Dr. Ambedkar played the states in the Constituent Assembly.  The collegium is a disaster which is constitutionally illegitimate without training and functional criteria.  The whole process of the collegium is arbitrary in structure.  Their operation is unprincipled and when the choice made by them is absurd there is no way of correcting it except by a constitutional amendment or assertion of the Roosevelt type in the USA.  It is a pity that an imbecile Parliament has not chosen to amend the Constitution or prescribe a constitutional code of conduct for judges to behave themselves other than the impractical process of impeachment.  The consequence is the doubtful candidate creep into the bench and make pronouncements which are law for the land not because it is infallible but because it is final.

Communalism has corrupted judicial appointments, Dalit choosing dalits, castes and communities contaminating judicial appointments.  The first and foremost requirement if we do desire to have a straightforward justice-system with ability and integrity and investigation into character and social philosophy is to have a Commission for appointment of judges of high stature.  There were complaints details aggravated from time to time—casting obloquy on the collegium—suggesting a suspicion of graft and corruption such as Excessive acquisition of assets of the judge in the name of himself, close relations and benami in the name of the members of the family.

There is an urgency therefore of a Commission for appointment of judges.  Their names to be revealed and public criticism received and examined.  Secrecy leads to suspicion.  Judges before appointment should be like Caesar’s wife above suspicion.  In the USA the public have a voice.  Even in the U.K recently the system of appoint is no longer with the Chancellor. Why not India have a public system of transparency and accountability even in the matter of appointments.

In the case of Justice Dinakaran I find  about from Mr. Nariman, a most outstanding lawyer that the candidate is as good as a zamindar, easy to administrate distribution of lands to the poor taking it away from the rich land-holders.  A latifundist doing justice to landless tellers indeed. Without being a Marxist Prof.Griffith in his book on the Politics of the Judiciary has stated—Lord Scrutton and Winston Churchill quoted to make the same point that the judges are biased their class-bias will affect their judgments:

The courts hold justly a high, and I think, unequalled pre-eminence in the respect of the world in criminal cases, and in civil cases between man and man, no doubt, they deserve and command the respect and admiration of all classes of the community, but where class issues are involved, it is impossible to pretend that the courts command the same degree of general confidence.  On the contrary, they do not, and a very large number of our population have been led to the opinion that they are, unconsciously, no doubt, biassed.   (Winston Churchill: The Politics of the Judiciary P-173)

Where are your impartial Judges?  They all move in the same circle as the employers, and they are all educated and nursed in the same ideas as the employers.  How can a labour man or a trade unionist get impartial justice?’ It is very difficult sometimes to be sure that you have put yourself into a thoroughly impartial position between two disputants, one of your own class and one not of your class.

(Lord Scrutton : The Politics of the Judiciary P-173)

I have no doubt that a Commission for investigation and report on the assets and liabilities of judges and their benamidars is a condition precedent before the candidate is appointed.  The collegium can be overruled by the President and the Prime Minister ordering such a Commission.  In that event dubious candidates will not offer themselves or influence their desire to be a judge.  Occasional investigation by Commissions of the assets of judges as a periodic phenomenon is necessary at least once in five years particularly before swearing in and shortly before appointment, after retirement Judgeship should not be a racket and the bench should not be filled by mafia or within the orbit of the upper classes.

This country is a socialist secular ideology and democracy with a poor majority must be animated by that passion committed to service of India tuned to the tryst with destiny that eloquent performance by Nehru when India became free and swaraj and all national resources seemed to be the public property of We, the People of India.

To sum up right now the Parliament exercising its constituent power must amend the Constitution and create a well-thoughtout three Commissions for appointments of judges for performance of judges and for independent enquiry into assets and liabilities of judges periodically.  Of course, assets will mean those in the names of relations, dependants and the new art of sunstrokes.

Why do I long ago retire from the bench still take up the case of one judge?  Because one swallow does make a summer and the public lose the respect for the judicature if one corrupt judge makes whole institution a casualty.  After all, judges as Felix Frankfurter put it:

Judges as persons, or courts as institutions, are entitled to no greater immunity from criticism than other persons or institutions.  Just because the holders of judicial office are identified with the interests of justice they may forget their common human frailties and fallibilities.

Not one bad robe should be allowed to tarnish a great institution.  The collegium must perish or they be removed. Every member of this strange enigma is guilty of a vicious villain is elevated to the Bench.  A new class of radicals and creative thinkers to transform our society is the demand of the nation. With Indian adaptation Prof. Griffith’s concluding paragraphs is relevant. What I wish our Parliamentarians did actualize, the executive and the judiciary warmly catalysed in the consummation in Prof. Griffith’s words:

Judges are the product of a class and have the characteristics of that class such as dynastic cult and communal credentials.  This is not the stuff of which reformers are made still less radicals.

[This letter was written by Justice Krishna Iyer, on Dinakaran issue to then Chief Justice of India]