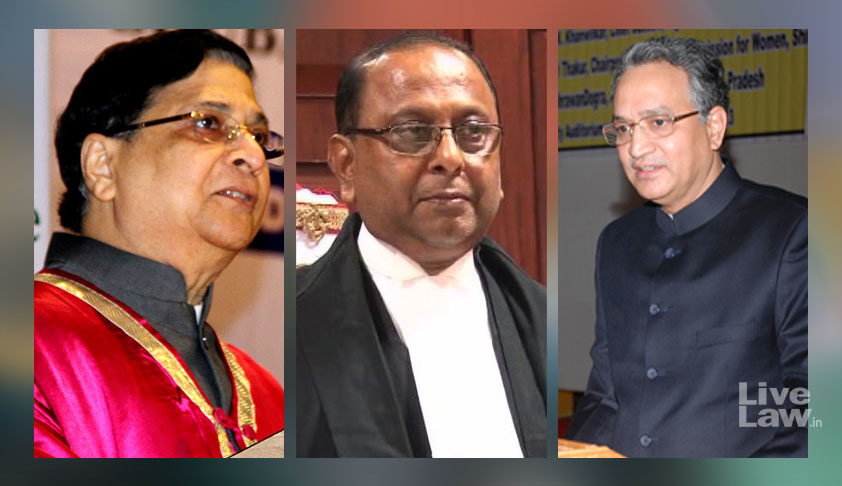 A three-judge bench of the Supreme Court has referred the matter challenging the practice of prescribing minimum marks for viva voce in district judges’ selection after the written examination is over, for the consideration of constitution bench.The bench of Justice Dipak Misra, Justice Amitava Roy and Justice AM Khanwilkar was hearing a reference [Samrjeet Singh case] from a two-judge...

A three-judge bench of the Supreme Court has referred the matter challenging the practice of prescribing minimum marks for viva voce in district judges’ selection after the written examination is over, for the consideration of constitution bench.

The bench of Justice Dipak Misra, Justice Amitava Roy and Justice AM Khanwilkar was hearing a reference [Samrjeet Singh case] from a two-judge bench, which referred the matter to the larger bench because of conflicting views.

It was in October 2016, that the bench of Justice Shiva Kirti Singh and Justice R Banumathi delivered split verdict in the matter of challenge against prescribing minimum marks for viva voce conducted by the High Court of Manipur for an appointment to the post of district judge (entry level).

Salam Samarjeet Singh, an aspirant for the district judge post, was declared unsuccessful in viva voce conducted by the high court, for failing to get 40% marks.

Though no minimum marks were prescribed in the rules and advertisement, the full court took a decision that “no one shall be declared ‘pass’ and selected for appointment unless he secures minimum 40% from the interview”.

He challenged the said action by preferring a writ petition before the apex court under Article 32 of the Constitution of India.

Justice Banumathi dismissed the writ petition he filed before the apex court, observing that when the decision of the full court was to ensure selection of a meritorious candidate, it cannot be said the decision of the high court amounted to change in the criteria of selection after the selection process had started. It was also held that keeping in view the Rules and having regard to the seniority of the post, which is district judge (entry level), the high court cannot be faulted with for exercising its residuary right reserved in its favour by prescribing cut-off marks for the interview.

Justice Shiva Kirti Singh, in his separate dissenting opinion, allowed the writ petition and observed that the high court resolution was not communicated to the petitioner and it was neither a part of the rules nor of the advertisement and, hence, the theory that if a candidate takes a calculated chance and faces the selection procedure, then, on the result being unfavourable, he cannot be permitted to turn around and challenge the process of selection, is not at all attracted. The theory rests on the hypothesis that the impugned procedure or rule is already in public domain and the candidate must, therefore, be aware of it when he participates, Justice Singh said.

In Tej Prakash case, failed candidates in Rajasthan High Court’s selection for translators had approached the court challenging the process of selection.

According to the petitioners, after the examination was conducted, the Chief Justice ordered that the examination be treated as a competitive examination and only those candidates who secured a minimum of 75% marks be selected to fill up the posts in question.

Admittedly, the requirement of securing the minimum qualifying marks of 75% is not a stipulation of the Service Rules (referred to earlier) of the first respondent high court, as on the date of initiation of the recruitment process in question (i.e. 17th September, 2009).

The failed candidates challenged the selection process on the ground that the decision of the Chief Justice to select only those candidates who secured a minimum of 75% marks would amount to “changing the rules of the game after the game is played” – a cliché whose true purport is required to be examined notwithstanding the declaration of this court in Manjusree’s case (2008) that it is “clearly impermissible”.

But the three-judge bench of Justice RM Lodha, Justice Chelameswar and Justice Madan B Lokur noted that the two-judge bench, which decided the Manjusree case, did not consider the earlier judgment in State of Haryana vs Subash Chander Marwaha and Others (1974), which took the contrary view. Hence, the bench referred matter to the constitution bench.

Impact on other cases

In April 2017, some of the failed candidates in the Kerala district judges’ selection had approached the Supreme Court challenging the selection process, on similar grounds and the court issued notice to the Kerala High Court. During the hearing of another batch of petitions challenging the selection, a two-judge bench noted that a similar issue [Samarjeet Singh case] was pending before the three-judge bench.