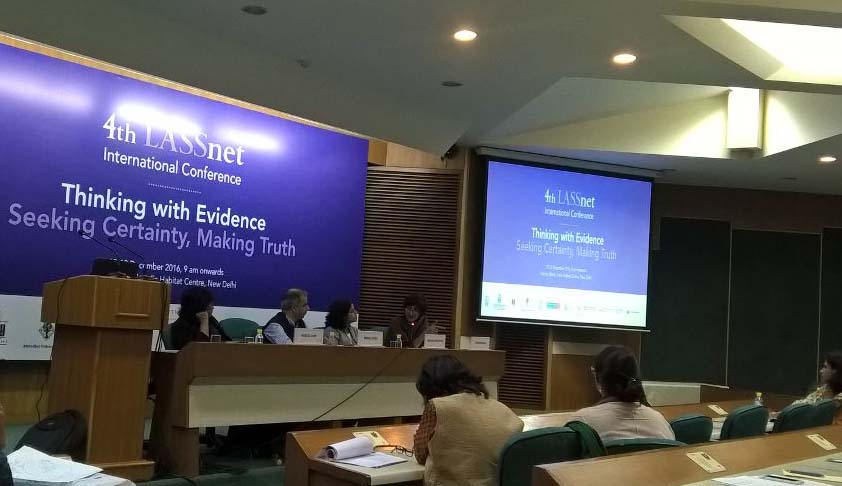 Experts came out strongly against the sentencing policy pursued by the Indian courts, at one of the sessions held during the ongoing 4th LASSnet Conference in New Delhi today.Professor Mrinal Satish of the National Law University, Delhi, who has researched more than 800 and odd rape cases of High Courts and the Supreme Court during the period  1984-2009, for his recently published book,...

Experts came out strongly against the sentencing policy pursued by the Indian courts, at one of the sessions held during the ongoing 4th LASSnet Conference in New Delhi today.

Professor Mrinal Satish of the National Law University, Delhi, who has researched more than 800 and odd rape cases of High Courts and the Supreme Court during the period  1984-2009, for his recently published book, said that he found high reversal rates in the decisions of the high courts and the Supreme Court.  Very often, the high courts went below the minimum sentence, without any reasoning, he said.

Rapes by acquaintances, in contrast to rapes by strangers, invited lesser sentences by the Judges – without any logic. Professor Satish made a strong plea for structuring sentencing discretion of the Judges, rather than eliminate it.  He also called for a theory of punishment, which would help the Judges avoid stereotypes in rape sentencing.

He recalled that the 2003 Malimath Report also underlined the need for sentencing guidelines, and had cited the U.K. Model on Sentencing Guidelines, without elaborating.  He disclosed that many trial court Judges, when he was working in Bhopal Judicial Academy some years ago, had told him that many of their sentences were reversed by appellate courts, because they lacked guidelines in sentencing. mandatory minimum sentence would shift the discretionary power from the Judges to the police, as the latter would decide what charges must be foisted on an accused.   He asked why was actor Sanjay Dutt, convicted under the Arms Act, was sentenced for five years imprisonment, while a 80-year old lady, also convicted for the same offence, sentenced for 10 years imprisonment.   Professor Satish has described the sentencing policy as unconstitutional, and violative of Article 14 of the Constitution.

Senior advocate, Rebecca John, while participating in the discussion on Professor Satish’s book, lamented that the Indian Supreme Court has absolutely no policy with regard to sentencing.  Recounting a latest case, she said a former Chief Secretary of the Government of Tripura, after 24 years of trial, was convicted and sentenced for four years rigorous imprisonment by the Supreme Court, although he was 88 years old, and was paralysed.  Within a few days, he died in jail, she said.  She said that Judges do not record handicap, and serious illness of the convicts as mitigating factors, while sentencing.

Rebecca John pointed to other anomalies in sentencing. The Unlawful Activities (Prevention) Act (UAPA) prescribes a maximum sentence of life imprisonment and with fine for being a member of the terrorist organization, but prescribes no minimum sentence.  How would the Judge use his or her discretion here, she asked.

On death sentencing, she said the Supreme Court did not follow its own judgments.

Referring to Section 124A IPC, which deals with punishment for sedition, she said, it prescribes only three kinds of punishment: life imprisonment, to which fine may be added, three years imprisonment to which fine may be added, or just fine.  Again, a sentencing Judge has no guideline how to use his discretion to award a sentence for this offence.  Saying there is absolutely no legal precedent, she asked what action will qualify for life imprisonment or three years or just fine?

Rebecca John then referred to Section 311 IPC, which prescribes life imprisonment and fine for the offence of being a thug.  This is non-sensical, she said.  Similarly, she said, Section 326 IPC, dealing with voluntarily causing grievous hurt, prescribes a mandatory minimum punishment of 10 years imprisonment with fine, and a maximum punishment of life imprisonment.   She asked:  “What is the guideline that helps a Judge to come to a just decision?; discretion is arbitrarily used.”