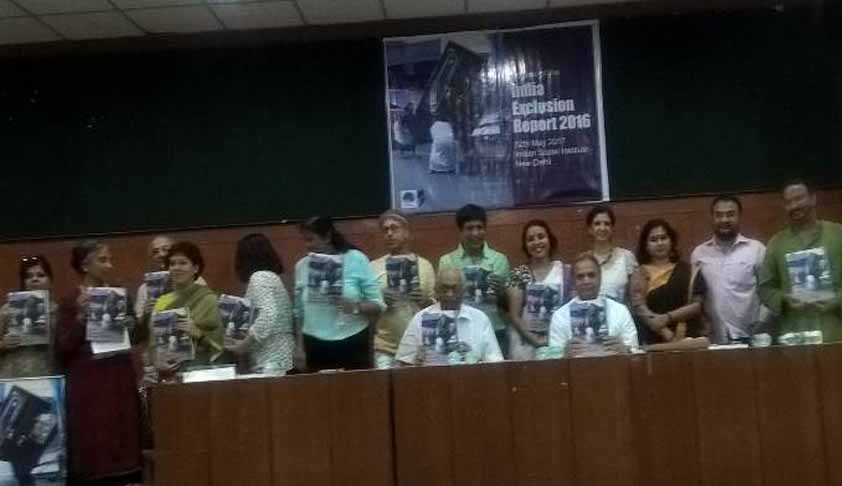 The Centre for Equity Studies (CES) released the India Exclusion Report 2016 today at the Indian Social Institute in New Delhi with the outgoing Chairman of the Indian Council of Social Science Research (ICSSR), Sukhdeo Thorat delivering a keynote address. This is the third edition of the annual flagship publication of CES.

He said that economic exclusion is often at an individual level, about capacities that are unrealised because of a lack of means; while social exclusion is a group exclusion. The failure to distinguish between the two causes a lack of clarity– and safeguards against identity-based exclusions fail to grapple with class-based ones, and vice-versa. He warned against this approach, further stating that, “it is our job to make these distinctions… we indiscriminately club together SCs and STs as well, in statistics and otherwise, when what one faces is not at all like the other.”

The report, edited by social activist, Harsh Mander, is a collaborative effort among multiple stakeholders and it examines the processes and consequences of exclusion, and proposes actionable recommendations for law, policy, and programmatic reform.

The India Exclusion Report reviews exclusion with respect to four public goods, one each in the areas of the social sector; infrastructure; land, labour, and natural resources; and legal justice. This year, the topics of inquiry are: pensions for the elderly, digital access, agricultural land, and legal justice for under-trials.

The report also examines exclusion in budgetary and planning processes, with a focus on recent changes in India’s fiscal architecture following the Fourteenth Finance Commission’s recommendations and its implications for spending in the social sector. It then profiles four highly excluded and vulnerable groups: disabled girls and women in rural India; urban street children; the urban poor in Delhi; and manual scavengers.

“The headline of this and indeed every Exclusion Report so far has been that the evidence is consistent that for virtually every public good that we examine, it is always the same sets of peoples who are excluded. These are the historically oppressed groups of women, Dalits, Adivasis, Muslims, persons with disabilities and casual informal workers and the poor. This report only confirms these findings, and illuminates the multiple ways in which even the democratic state in the Indian republic has failed these oppressed peoples and not assured them equitable access to the public goods essential for them to lead lives of dignity,” writes Mander in the introduction to the report.

The chapter on Exclusion from Access to Legal Justice, has been authored by academics, Gitanjali Prasad and Mrinal Satish.  They have proposed that state governments, prison departments and jail authorities must work together, and adopt certain reform measures, to make the custodial system more open and less exploitative.