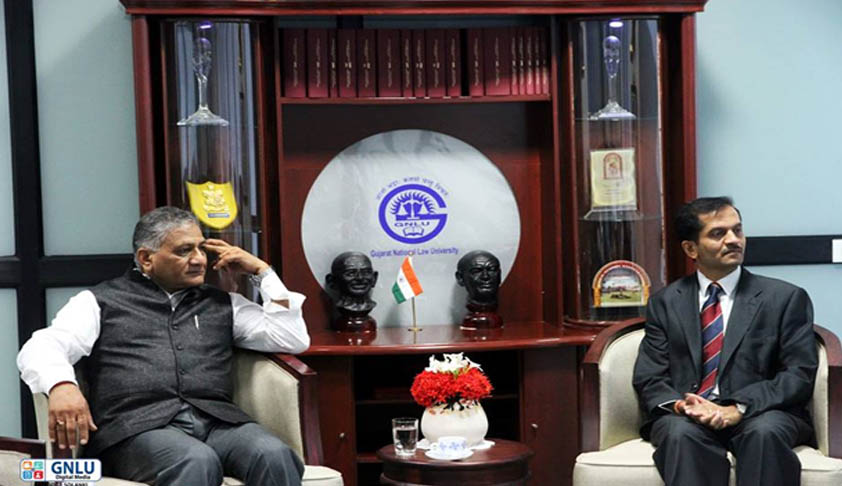 The GNLU Center for Foreign Policy and Security Studies in collaboration with Indian Council of World Affairs, New Delhi held its International Conference on "India's Foreign Relations- Southeast Asia and the Indian Ocean: Strengthening the political, Economics, Security, and cultural Prospectus" on the September 12 and 13th. The Conference focused on Assessing the Overall Effectiveness of the “Look East Policy”, Consolidating the Existing and Identifying New Prospects and India’s Role and Responsibility as a major Power in the Indian Ocean and Strengthening the Cooperation between IOR-ARC Members.

The Conference was inaugurated by Minister of State for External Affairs and North East Affairs, Retd. General V.K Singh. Speaking at the conference, Singh outlined issues of illegal trafficking of drugs, people, illegal fishing into Indian waters, and illegal survey of Indian areas in a bid to start mining operations as issues that were being addressed by the new government’s “proactive foreign policy”. He was impressed by the wonderful campus and lightened up the mood by praising the research conducted by GNLU and the ongoing international projects undertaken by it. He concluded the speech with a prayer to the youth to “look afresh” and consider foreign policies as major game changers.Prof. Dr. Bimal Patel, Vice Chancellor of GNLU addressed the gathering stating various important aspects related to the Indian Foreign Policy. As a former United Nations Civil Servant the Vice Chancellor has been the driving force and patron of the Conference. He briefly described the achievements of GNLU in this calendar year which included drafting of various laws for the Govt of India, introduction of the Microsoft IPR chair in the University, training of over 300 officers through the continuous workshops conducted in the University, and also abiding by the Corporate regulations. Senior Faculty and Deputy Director of the Center for Foreign Policy and Security Studies, Dr. Aruna Kumar Malik in his capacity as the Conference Convener, briefed the gathering about the significance of the conference for which GNLU have received over 81 abstracts from India, Bangladesh and Sri Lanka. Lieutenant General D B Shekatkar , Regional Defence Chiefs from all the three Defence forces, Coast Guard Inspector General, Principal Secretary to the Gujarat Government and other senior Academicians and Bureaucrats graced the program. Mr Asit Singh IRS, Commissioner of Income Tax, New Delhi was also specially invited to address the gathering.

The Registrar of the University Prof. Dr. Thomas Mathew concluded the formal inauguration with a Vote of Thanks. Conference Sessions were chaired by eminent Academicians from both Universities and well renowned Think tanks.