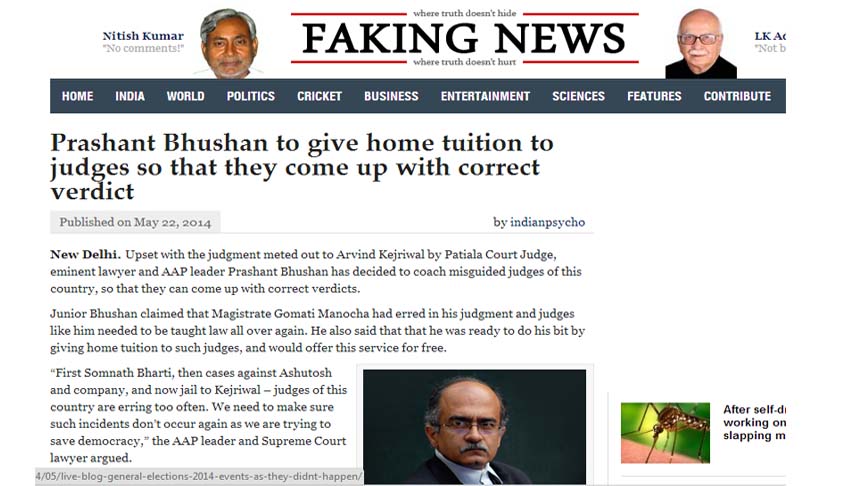 A spoof news about the Aam Aadmi Party led counsels of Nitin Gagkari to contend on the basis of it in the Delhi High Court on Tuesday. They advocated upon a news story which claimed that one of the AAP leaders said the magistrate who sent Kejriwal to jail needed to be taught law all over again.

The BJP leader's counsel stated the news to assert that such statements were contemptuous. But infact the statement made for not at all dafamatory as "news item" cited was actually a satire on AAP taken from a website that spoofs news. Saying it was an "inadvertent mistake", the advocate immediately withdrew the submission.

Apart from this, Gadkari's lawyers referred to the "open letter" by Kejriwal during hearing Kejriwal's habeas corpus petition. Written by Kejriwal himself, the letter stated, "I took on former BJP president Nitin Gadkari and exposed him, but he is roaming scot-free and I have been put in jail. They asked me to take bail, but what crime have I committed to take bail?"

A petition that sought to ban the publication and ciculation of Kejriwal's letter was moved in the High Court of Delhi on Monday. The PIL had also sought blocking of the AAP website till the letter was withdrawn from it. The letter questioned the AAP propounder's judicial custody and also put forth allegations against Gadkari.

Furthermore, the PIL filed also sought the ban the ground that it would entice people not to comply with the rule of law. The plea will be heard by High Court of Delhi on Wednesday.