Female Genital Mutilation [FGM] May Not Be Life Threatening, But A Permanent Mental, Emotional And Physical Scarring At A Woman:Chandrachud.J 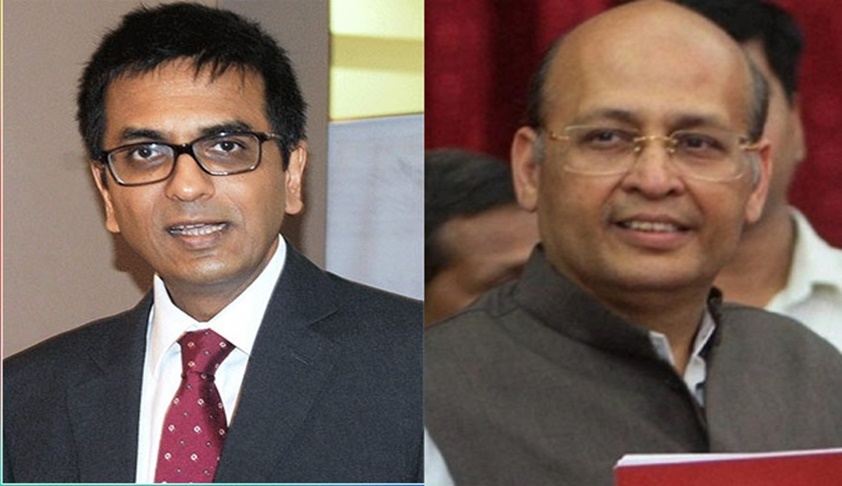 Senior Advocate Abhishek Manu Singhvi insisted that the question of ‘essentiality’ of Female Genital Mutilation to the Dawoodi Bohra faith be considered by a constitution bench.The hearing in the Supreme Court on the challenge to the alleged practice of Female Genital Mutilation (FGM) purported to be followed by the Dawoodi Bohra community in India witnessed a canvassing of the concept...

Senior Advocate Abhishek Manu Singhvi insisted that the question of ‘essentiality’ of Female Genital Mutilation to the Dawoodi Bohra faith be considered by a constitution bench.

The hearing in the Supreme Court on the challenge to the alleged practice of Female Genital Mutilation (FGM) purported to be followed by the Dawoodi Bohra community in India witnessed a canvassing of the concept of constitutional morality on Monday.

At the previous hearings, the bench of Chief Justice Dipak Misra, Justice D. Y. Chandrachud and Justice A. M. Khanwilkar has noted that a religious practice, claimed to be an essential part of the doctrine of that faith, must also satisfy the test of constitutional morality to be entitled to the protection of Article 25.

On Monday, Senior Counsel Abhishek Manu Singhvi, appearing on behalf of as many as 70,000 women belonging to the said community who stand by the practice of Female Circumcision (FC), indicated the October, 2017 order referring the Sabarimala Temple controversy to the constitution bench. In the said order, Chief Justice Misra had observed that morality, as envisaged in Article 25 or Article 26, is not an individualized or sectionalized perception subject to the varying ideals of every religion, but is based on the constitutional text and should be in consonance with Articles 14, 15, 17, 21, 38 and 51A.

Dr. Singhvi juxtaposed it with Chief Justice J. S. Khehar’s remarks in the 2017 Triple Talaq judgment- that there is no doubt that the ‘personal law’ has been elevated to the stature of a fundamental right, that it is the constitutional duty of all Courts to protect all fundamental rights, and that it is judicially unthinkable for a Court to accept any prayer to declare as unconstitutional, for any reason or logic, what the Constitution declares as a fundamental right because in doing so the Court would be denying the rights expressly protected under Article 25.

Chief Justice Misra reflected that while the latter spoke of the assumption of a Fundamental Right, the reference order in Sabarimala dealt with the denial of such an assumption.

“Your Lordships may not apply constitutional morality to deny the relief of an essential practice because some notion of it violates Article 14 or 21...a larger concept of constitutional morality, which is not Article 25 morality, cannot displace an Article of the Constitution...Morality is nothing but a reasonable restriction like those in clauses (2), (3) and so on of Article 19...”, argued Dr. Singhvi.

“Constitutional morality, for the purpose of Article 25, means something de hors the practice of a religion, some social repugnance or a law and order situation...”, he continued.

“Even if the state does not enact a law under clause (2) of Article 25, the right under the Article is still subject to morality...it is not the morality of a mob but what the constitution envisages, the morality that flows from the preamble and Articles 15 and 21...even if Article 15 does not apply because we are dealing with a private entity, the principle of dignity, which is Fundamental to a human, still would...Suppose a religion says that the eldest daughter of a family has to become a ‘devadasi’? What if a religion allows the practice of polyandry? Can that be said to be conducive to the dignity of an individual just because the practice is an essential one?”, inquired Justice Chandrachud.

“One test is that of permanence. If there is a permanent deprivation of life, as in the case of Sati or the cannibalism practiced by the Aghori tribe or even in the ‘devadasi’ ritual, then I bow down...But Your Lordships may not abolish polyandry which is permitted under the customary law in the north-east and the south. Your Lordships would normally wait for a legislation in such an event. To apply the tests of Articles 14 and 21 to an essential practice would amount to subjectivity...”, responded Dr.Singhvi.

At this point, the Chief Justice weighed in, “the Constitution, as conceived by this court in the last 45 years, says that you have no right to cause injury to another. All tests of ‘essentiality’ and ‘integrality’ are related to material aspects or have a property orientation (reference made to the 1902 Bombay High Court decision in Jamshedji v. Soonabai where the bequest of property by a Parsi testator for the purpose of perpetual celebration of ceremonies like Muktad baj and Vyezashni was held to be a valid charitable gift, despite not being recognised under the charity law, on the ground that it is sanctioned by the Zoroastrian religion)...one’s right to autonomy is protected under Article 21 and to infringe the same (by compelling one to undergo FC) to enhance the colour of a woman’s skin and to make her more favourable to her husband?”

“(FC) may not be life threatening but there is a permanent mental, emotional and physical scarring of a woman”, added Justice Chandrachud.

Dr. Singhvi asked about the approach of the bench in the hypothetical scenario where Male Circumcision (MC) is challenged in a PIL.

When Justice Chandrachud remarked that MC has a scientific explanation, the Senior Counsel contended that the Quran does not base the practice of MC in its health benefits but in the belief of purity associated with it.

“Morality poses a problem when it is detracted by a constitutional value...An Article of the Constitution can only hesitantly be allowed to be detracted by another Part III Article...morality under Article 25 will bring within its sweep Articles 14, 15, 16, 21 etc...”, continued Dr. Singhvi.

“If Your Lordships apply the essentiality test and find a reasonable restriction to the practice, that restriction must arise from a notion different from the religion and the community which considers the practice essential...this derogating principle must have an external element and cannot be from within community...”, he suggested.

On Monday, the Senior Advocate insisted that the question of ‘essentiality’ of FC to the Dawoodi Bohra faith be considered by a constitution bench.

“This case involves a substantial question of interpretation of Articles 25, 26 and 29...the decision in Sardar Syedna Taher Saifuddin Saheb, which recognised as an essential part the unique element of my religion- unquestioned faith in the ‘Dai’, who is the living, Human representative of the ‘Imam’, in civil and ecclesiastical matters- was also rendered by a constitution bench...the Sabarimala controversy was referred to a five-judge bench even though it involved a weaker assertion of gender discrimination...de hors a reference, any restriction of the practice of FC would be violative of the rights under Articles 25 and 26 of the community...”, he elaborated.

Advancing that to decide the issue at hand in a PIL would be “hazardous”, Dr. Singhvi indicated the cases of Ratilal Panachand Gandhi, Shirur Mutt, Tilkayat, Sardar Sayedna and, most recently, of the Sabarimala Temple, in all of which the intervention of the court, in ascertaining the essentiality of a practice to a religion, had its basis in a statutory mandate affecting the religion and not in a PIL-

“There is no factual or contextual substratum before Your Lordships, no scientific evidence except some newspaper articles and ipse dixit and hearsay claims...this matter calls for an examination of evidence in a suit proceeding or at least before the High Court...a few stray examples of Dawoodi Bohra women complaining of cruelty have been cited, while I represent 70,000 women of the community which has a population of 5 lakh in India and who regard FC as only a minute physical inconvenience with numerous benefits...”

Once again, he objected to the use of the “provocative phraseology” FGM to lump the barbaric, African ritual with the practice of FC followed by the Dawoodi Bohras. He invited the attention of the bench to a Central Ministry affidavit asserting that there is no official data or study by the National Crime Records Bureau supporting even the practice of FGM in India.

“There is no mutilation of the genitalia. FC only involves a nicking of the prepuce. There is no emotional scarring. Modern Bohra woman, 2018 teenagers are not opposing it. There is no evidence of any compulsion or forcefulness”, Dr. Singhvi argued.

Chipping in, Senior Advocate Meenakshi Arora also contributed, “only the foreskin is cut in a proper manner as dictated by the ancient texts. If there is any excessive cutting, the religious texts speak of the payment of blood money. These texts, which are thousands of years old, talk of marital rape, that a man will not force his wife. One sentence in a part of the same text, which is a translation, cannot be interpreted to treat women as an object for man’s pleasure...”

When his opinion was sought by the bench, Attorney General K. K. Venugopal reiterated that the impugned religious practice infringed the right to privacy in Article 21.