Final Hearing Of Hadiya Case: Who Said What? [Courtroom Exchange] 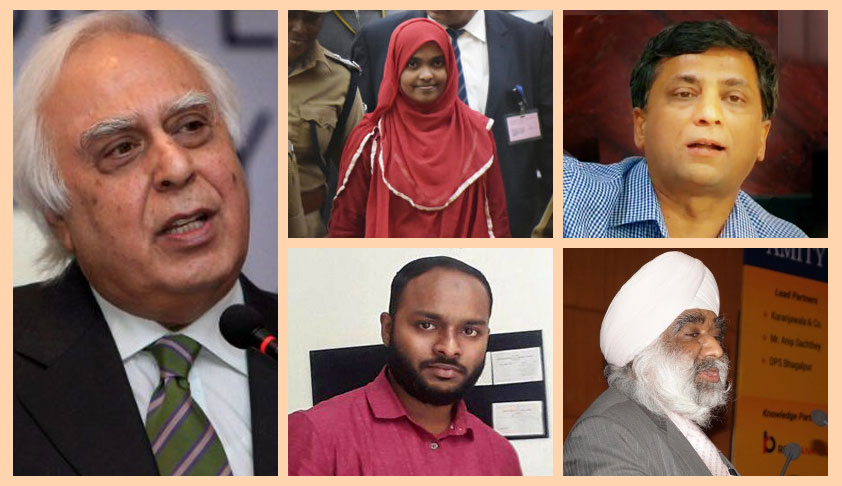 The final hearing in the Hadiya case on Thursday commenced with senior counsel Kapil Sibal, appearing on behalf of Shafin Jahan, the petitioner, raising two issues: “One, can in a habeas corpus petition, the high court suo motu proceed to nullify a marriage? And second, it a settled position of law that no third party can move any proceeding in any court in respect of marriage between...

The final hearing in the Hadiya case on Thursday commenced with senior counsel Kapil Sibal, appearing on behalf of Shafin Jahan, the petitioner, raising two issues: “One, can in a habeas corpus petition, the high court suo motu proceed to nullify a marriage? And second, it a settled position of law that no third party can move any proceeding in any court in respect of marriage between two consenting adults”.

“The right to choose one’s partner is incorporated in the right to life and liberty under Article 21 of the Constitution of India... A habeas corpus petition is unique in its object of challenging illegal detention; it is inappropriate to question marital status and consent therein... In case of two consenting adults, the marital status cannot be called in to question by anyone except the parties to the marriage… the status of the court is also that of a third party... no investigation can be lawfully proceeded into the marital status, on account of the settled position that no FIR or private complaint pertaining to a marriage may be entertained... To question the mental capacity of an individual is a violation of their fundamental right to privacy and dignity... the mental capacity of the woman in question has already been established by her interaction in the Kerala High Court as well as the Supreme Court,” Sibal continued advancing his submissions.

Thereupon, he referred the bench of Chief Justice Dipak Misra, Justice D. Y. Chandrachud and Justice A. M. Khanwilkar to the recent judgment of the apex court in Soni Gerry v. Gerry Douglas, wherein the court observed that the court cannot assume the role of a super-guardian where an adult unequivocally expresses their opinion

“If it is a case where the solemnization of marriage is carried out in the background of poverty or illiteracy of one of the parties, either man or woman, the court could be justified in its intervention. But when two freely consenting adults have decided to get married, can the court go into the rightness or correctness of the partner or the justness of marriage,” inquired Justice Chandrachud.

“There may be instances where, on account of socio-economic factors of one of the parties or the (proved) fact of mental incapacity, the party cannot be entitled to assert their right. But what are the facts and circumstances where the court may otherwise make this exception on the ground of either mental incapacity or that the consent was obtained by fraud,” asked the judge.

“I believe we agree that the oversight of the High Court under Article 226 cannot be completely shut out in appropriate cases...the traditional doctrine of marriage fraud recognises the events when there is either no free consent or an individual is incapable of giving consent. And now the law has evolved to say that a particular marriage is a fraud...”, Divan sought to respond.

“But can we allow the public law or even the State to interfere,” asked Justice Chandrachud.

“It is already happening”, replied Divan.

“In a habeas corpus petition, once it has been established that there is no wrongful confinement, the case ends,” remarked the Chief Justice.

“Perhaps not...in the present case, the concept of marriage between consenting adults is being employed to defeat the law and to prevent the exercise of its jurisdiction by the High Court so as to give effect to the act of trafficking...there is a well-oiled machinery that is orchestrating the entire act...”, replied Divan.

Cutting him across, the Chief Justice observed, “To tell you candidly, this argument does not impress us...we have interacted with the girl...the court cannot get into consensual obsession...”

“But in such extraordinary cases, the High Court has a plenary jurisdiction...,” began Divan.

“In respect of marriage and intimacy, we cannot apply the Wednesbury doctrine of reasonableness,” added Justice Chandrachud.

Moving on to question ASG Maninder Singh, appearing for the NIA, the Chief Justice inquired, “Have you investigated into any offence against either the man or the woman?”

Vehemently emphasising that the investigation may not extend to the question of marital status, the Chief Justice remarked, “‘X’ obtains a decree of divorce against ‘Y’. One year later, they resolve their differences and again enter into marriage. What can the court do?”

“But it is necessary that the consent be direct and free,” the ASG sought to submit.

“Please examine the report of investigation”, urged the ASG aggressively. “As on December 19, 2016, the girl was not married when her custody was handed over to Sainaba...the marriage is only a ploy...this has even come on record before the High Court”, he proceeded to submit.

The bench expressed surprise at the use of the term ‘custody’ in context of an adult.

“Let us simplify things...she has appeared before the High Court and stated that she is not in confinement. The High Court could not have interfered in the marriage,” remarked the Chief Justice.

“If she was unmarried and had appeared before the court to say that she does not wish to return to her parents, then what would have the court done?...assuming that A and B are married and one of the parties has to be taken abroad, then the government may curb the traveling but the marriage could not have been nullified,” opined Justice Chandrachud.

“Although the picture that has been represented is that Hadiya came in contact of Shafin Jahan on her own. But there have been many other similar cases wherein respondents no. 7 and 8 (Sathyasarini Educational and Charitable Trust and Ms. Sainaba respectively) have been involved and the girls have refused to go back to their home and then their marriage has been arranged...,” submitted the ASG.

At this point, Sibal remarked, “Investigation is only allegation.”

“The investigation has been carried out as per the orders of the court. The FIR was registered...the investigation was first conducted by the Kerala State Police and then it was transferred to the NIA...I request Your Lordships to please wait for the outcome of the investigation,” said the ASG.

“The Kerala State Police report made out no offence...But now the NIA is saying otherwise...,” intervened Sibal.

In response to a question by the Chief Justice as to the offences in respect of which the FIR was registered, the ASG mentioned sections 153A, 295A, 107 and 57 of the Kerala Police Act.

“Then book them under these sections”, stated the Chief Justice. “That is all I wanted”, responded the ASG. “These are not scheduled offences under the NIA Act,” Sibal sought to submit.

Proceeding to elaborate on the expanding concept of marriage fraud, Divan submitted, “Annulment of marriage is recognised traditionally under the Special Marriages Act, the Hindu Marriage Act as well as the Shariat law. But now the concept of marriage fraud has expanded to include cases where fraud is not played on the parties to the marriage but on the public or the State. There are marriages of convenience entered into to avail benefits of pension, insurance etc. Such instances are not a private contractual fraud but fraud on the public”.

Moving on to discuss the findings of the high court,Divan submitted, “It may be noted that the marriage was not out of love, but a match arranged via the website ‘way to Nikah’. On December 19, 2016, it was communicated to the High Court by the Senior Counsel appearing for Hadiya that appropriate arrangement be made for her complete her education, and subsequently, on December 21, 2016, Shafin Jahan appeared before the court to state that Hadiya’s marriage had been solemnised to him on December 19! There was no mention of the any plans to marry even on his Facebook page where he is otherwise very expressive”.

Thereupon, Divan proceeded to refer to affidavits of individuals embroiled in identical circumstances, the cases of whom were also noted by the High Court. Reading from the affidavit of one Athira, he quoted- “...I left home to convert (to Islam)...I stayed with Ms. Sainaba...my name was changed...Sainaba spoke to me about marriage...I was produced before the High Court and the court wanted me to speak to my parents... I did not want to speak to them as they were ‘dwellers of hell’...when my father sought to touch my feet, I yelled at him...”

“This is identical to the present case...the belief that is engendered is that they will go to hell...the modus operandi is the same...,” submitted Divan.

Thereupon, he proceeded to throw light on the attempts to take Akhila @ Hadiya out of the country. In respect of the telephonic conversation between her father and herself wherein she had allegedly expressed a desire to go to Syria for sheep rearing, Justice Chandrachud remarked that the same was led deliberately by the father, in view of Sibal’s submission at the previous hearing. Divan clarified that though in the conversation that was recorded, the father had asked a leading question, it had its origin in an earlier conversation which was not recorded and where Hadiya had expressed the desire to move to Syria to rear sheep.

Continuing, Divan showed that in 2015, attempts were made to take Hadiya to Yemen by one Fasal Musthafa and his wife Sherin Shahana by the former seeking to take Hadiya as his second wife. It may be noted that the NIA has not been able to interrogate the said persons on account of their having absconded to Yemen.

“In our submission, the law has progressed for the High Court to annul the marriage, in view of the pattern of as many as 21 young, vulnerable individuals sought to be trafficked, each case involving Sainaba and Sathyasarini; that Hadiya, who is an adult, wanting Sainaba and thereupon her husband to be appointed as her guardian; and that an educated woman like her has written different spellings of her name in each affidavit, as observed by the High Court,” concluded Divan.

“There have been extremist views expressed by Shafin Jahan on his public Facebook page...he has spoken about having travelled to Yemen where now ISIS recruits are being trained...There have also been conversations with ISIS agent Mansi Buraaq, who is now in custody, as to how much money he shall get for becoming an ISIS recruiter,” submitted Divan.

“All this is enough to trigger Article 226...can a constitutional court remain mute in such circumstances,” inquired Divan rhetorically.

After conclusion of arguments the bench said it will pass a short order at 2pm.

Finally the Court set aside the Kerala High Court Judgment annulling the marriage between Hadiya and Shafin Jahan. However, the court has clarified that the National Investigation Agency (NIA) can continue its investigation.

Operative Portion Of The Judgment

"Considering the arguments advanced on both sides, in the facts of the present case, we hold that the High Court should not have annulled the marriage between Shafin Jahan and Hadiya alias Akhila Asokan, in a Habeas Corpus petition under Article 226 of the Constitution of India. We say so because in the present appeal, by special leave, we had directed the personal presence of Hadiya alias Akhila Asokan; she appeared before this Court on 27th November, 2017, and admitted her marriage with appellant No.1.

In view of the aforesaid, the appeal stands allowed. The judgment and order passed by the High Court is set aside. Hadiya alias Akhila Asokan is at liberty to pursue her future endeavours according to law. We clarify that the investigations by the NIA in respect of any matter of criminality may continue in accordance with law"