In A First An Indian Woman Scholar's Portrait Unveiled At Rhodes 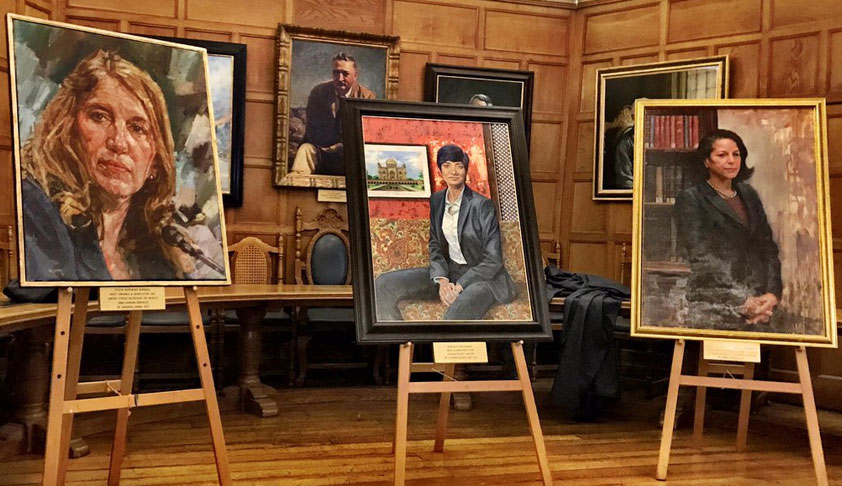 Dr. Menaka Guruswamy has earned the rare honor of having her portrait unveiled at Rhodes House in Oxford University. She is the first woman scholar who achieved this rare distinction.Dr. Guruswamy, who is a graduate of NLSIU, Bangalore, holds an LL.M from Harvard Law School and a BCL from the University of Oxford. Since her time at Oxford, she has worked at a law firm in New York and as a...

Dr. Menaka Guruswamy has earned the rare honor of having her portrait unveiled at Rhodes House in Oxford University. She is the first woman scholar who achieved this rare distinction.

Dr. Guruswamy, who is a graduate of NLSIU, Bangalore, holds an LL.M from Harvard Law School and a BCL from the University of Oxford. Since her time at Oxford, she has worked at a law firm in New York and as a Human Rights Consultant to the United Nations, taught at the New York University School of Law, and practiced law for the Office of the Attorney General of India. She is currently an advocate at her own practice in New Delhi.

Her portrait was unveiled along with the portraits of two other women scholars at an event held on September 16 in celebration of ‘40 years of Rhodes women’, organized by the Rhodes Trust. The others who earned the distinction are former US President Barack Obama’s national security advisor Susan Rice and American University President Sylvia Burwell.

Here is the full text of Dr. Guruswamy’s acceptance speech:

“I am so delighted to be here and thank you to Rhodes House, the trustees, fellow scholars and current scholars for this tremendous honour of a portrait. It is a remarkable privilege to be part of this sisterhood of extraordinary women Rhodes Scholars – you are rocket scientists, artificial intelligence designers, lawyers, teachers, doctors, researchers at the cutting edge of new discoveries, artists, poets, writers, activists and political leaders. You are trouble makers for you unsettle the status quo. You inspire me, you have taught me and you set high standards for me.

My mom put up a series of pictures of me when I left home for college, a shrine if you will in various stages of my development - from bawling to crawling to walking to speaking to litigating – but really THIS portrait trumps her collage. She might disagree, of course. I wanted to thank her, my dad and my partner for their unconditional love and support. Behind every successful woman there is always a wonderful family, and a fierce statute that prohibits sex discrimination.

I came to Oxford and to Rhodes House as young person of 23-24 years in 1998, full of excitement and curiosity. But, as I walked through the halls of Oxford and this house, I was struck by how no one in the paintings that graced their walls looked like me, or really anyone of my fellow Rhodes Scholars from India, or most of the scholars from African countries or really many of my fellow scholars from the rest of the world. And the dissimilarities I am referring to, are not really hair styles - if you know what I mean. The message overall seemed to be: you're here, but you really don't belong.

And we almost didn't get here: for us women these Rhodes scholarships are only but 40 years old. For us, this is not the oldest scholarship in the world. It is a young sisterhood of talented women, making change by our very existence and by our persistence, almost always against great odds in our professional and personal lives.

That this celebration is for us – Women Rhodes Scholars tells us much about the re-imagination of Rhodes Scholarships over the last few decades. It is the British Sex Discrimination Act, 1975 that enabled Cecil Rhodes's will to be amended, to end our exclusion. Though in real terms the exclusion of many others continued for a long while – black South Africans, LGBT folk, a never ending list of those who didn't really feature on the walls and halls of the Oxford I came to.

Today's Rhodes Scholars better reflect the beauty of the diverse world we live in, and also reflect, the intent of Rhodes House, the Trust and selection committees to better reflect this diversity of human experience and imagine the world rather differently from how the first founder did.

Unsurprisingly, the complexities of the origins of the Rhodes Scholarships, and the source of Cecil Rhodes money and his politics remain an enduring moral challenge for all of us – women and men, who continue to benefit of the privilege of being Rhodes Scholars.

As elaborated in the will of the first founder, Cecil Rhodes' goals in instituting 'the scholarships at Oxford' was for the "education of young colonists at a British University is to be a great advantage to them, for giving breath to their views, in instruction in life and manners and for instilling into their mind the advantages of the colonies as well as to the United Kingdom of the retention of the unity of the empire.'

As an Indian it was even more poignant to come for a post graduate degree in England whose history of colonization and plunder of my country; is something we still pay for. And whose lingering colonial remnants include poverty and deep divisions that have not healed.

How is it then – that one reconciles moral integrity with the enjoyment of such privilege that the Rhodes Scholarships and an Oxford degree bring? One does so, by deploying this privilege to good use: by that I mean to push the envelope in ways that this privilege allows you to. To ask tougher questions of authority, to attempt to always expand human freedom and be aware when our footsteps contract such freedom, and to practice our professions in ways that better perpetuate equality, and never to forget that our higher education degrees, our time in this Oxford sunshine and the ability of this extraordinary scholarship to open doors – in built on the backs of Africans.

What better way than to reimagine the legacy for Rhodes Scholars than instead of expanding the colonial empire- we expand dignity, embrace fraternity, enhance equality and disseminate opportunities. That we lead the fight in preserving our planet, making clear the enormity of climate change in these times of disbelievers in the sciences, and stay at the head of innovative thinking on matters as varied as artificial intelligence to mechanisms for wider accessibility of clean drinking water.

This is a time of some magnitude – for this is a time of great turmoil, of deep division and polarization, of muscular populism, ever widening inequality, and a contempt for intellectual life. It is now that our privilege must be put to use to challenges these phenomena, for our collective moral leadership, will shape the future of our species and safe guard our planet.

To always using this privilege to never turning away from that which needs to be changed, and to always facing that which seems to be unchangeable – that is what these scholarships must come to mean in these times that we live in.