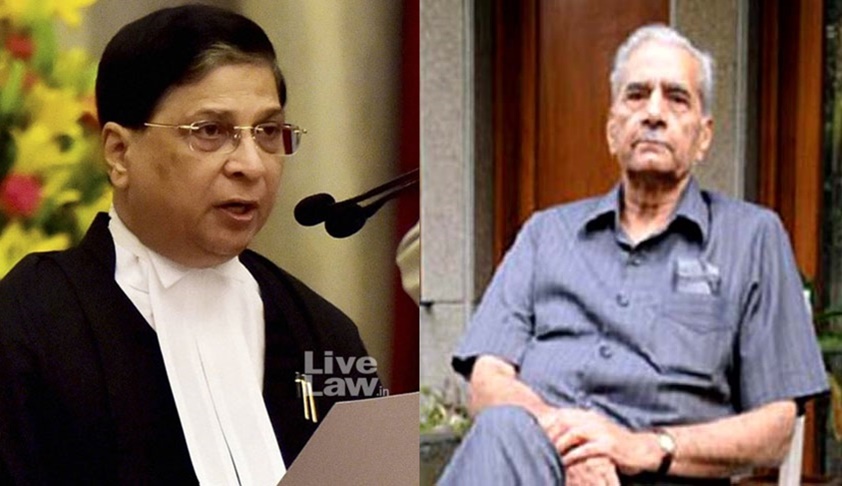 Amidst all the noise about “unfair listing of cases” and benches being handpicked for certain cases which reached its highest decibel with the unprecedented Press conference by the rebel judges, Former Law Minister and senior advocate Shanti Bhushan has filed a petition seeking clarification of administrative authority of the Chief Justice of India as the master of roster and for laying...

Amidst all the noise about “unfair listing of cases” and benches being handpicked for certain cases which reached its highest decibel with the unprecedented Press conference by the rebel judges, Former Law Minister and senior advocate Shanti Bhushan has filed a petition seeking clarification of administrative authority of the Chief Justice of India as the master of roster and for laying down of  procedures to be followed in preparing the roster for allocation of cases which should be by a collegium of five judges to check the “unguided and unbridled discretionary power” of the Chief Justice as the Master of Roster.

The petition, Mr Bhushan says, has been filed to check the abuse of powers of CJI in assigning cases or constituting benches.

Since the petition has impleaded CJI himself (presently Dipak Misra), Mr Bhushan has written to the Supreme Court, Secretary General, that in this case the Chief Justice should neither hear the case nor decide the roster for the hearing of this case.

“‘Master of roster’ cannot be unguided and unbridled discretionary power, exercised arbitrarily by the Hon’ble Chief Justice of India by hand-picking benches of select Judges or by assigning cases to particular Judges. Any such power or its exercise would result in a subversion of democracy and the Rule of Law as guaranteed under Article 14 of the Constitution.

“The authority of the Hon’ble Chief Justice of India as master of roster is not an absolute, arbitrary, singular power that is vested in the Chief Justice alone and which may be exercised with his sole discretion,” it says.

The petition prays for following reliefs:

Mr Bhushan says in the petition that the “authority vested in the Chief Justice of India must necessarily be exercised by him in consultation with the senior judges of the Supreme Court in keeping with the various pronouncement of this Hon’ble Court.

“Underlying the evolution of the principle of the collegium is the Hon’ble Supreme Courts dictum that the collective opinion of a collegium of senior judges is much safer than the opinion of the Chief Justice alone”.

The petition says even the international best practices are based on objective rules for case allocation that respect collegiality, the relevance of seniority, equality of the Justices, fairness of work distribution, expertise and transparency.

The petition says the CJI may be the master of roster but this power to exercise such authority cannot be used to assert any superior authority by the Chief Justice since it is a well settled principle of jurisprudence that the Chief Justice is only the first among equals.

It is to be noted that a roster declares what work is assigned to High Court and Supreme Court judges.

‘Master of the Roster’ refers to the privilege of the Chief Justice to constitute Benches to hear cases.

Mr Bhushan says this power must be exercised in a fair, just and transparent manner and in  keeping with the high standards of integrity desired from the office of a Chief Justice of India who yields greater power when it comes to Constitutional cases involving constitution of larger benches.

“The absolute discretion of the Chief Justice of India in allowing a particular case or disallowing another on oral mentioning is also another important aspect that needs to be scrutinised in its application and exercise,” says the petition.

Mr Bhushan says the manner in which power has been concentrated in the office of the Chief Justice of India raises serious problems relating to constitutionalism and the rule of law.

Citing the cases titled State of Rajasthan vs. Prakash Chand and Others and the more recent case of Campaign for Judicial Accountability and Reforms v Union of India and another, wherein the powers of the CJI to assign cases as master of roster was upheld, Mr Bhushan says, the decision in these cases is “a nullity and vitiated by the rule against bias” as the CJI ought to have recused from hearing this case pertaining to payment of bribe for favourable orders in matters pending before the CJI himself.

The petition raised serious questions relating to the functioning of the Registry of the Supreme Court and the powers exercised by the CJI in “listing matters” as it said  matters of general public importance and/or of political sensitivity are listed before only certain Benches contrary to the Supreme Court Rules, Handbook of procedure and conventions.

“…in recent months there have been number of instances in which such powers have been exercised with legal malice by abusing the administrative authority conferred under the Constitution, the Rules, the Handbook of Procedure and the convention on the concerned Respondents,” said the petition.

Mr Bhushan says the powers being exercised by the CJI and the concerned Registry officials clearly reflect a pattern of favouritism, nepotism and forum shopping.

It is to be noted that Dipak Misra was appointed as Chief Justice of India on 28th August 2017. On February 1st, 2018 “Roster of the Work for Fresh Cases” came to be notified by the Registry under the orders of the CJI.

The Roster was to be effective from February 5th, 2018 till further orders. Under the said roster all “letter petitions and PIL matters” have been arrogated by the CJI to himself along with “criminal matters”.

Examples of cases of abuse of powers as master of roster

The petition cites certain cases which it syas shows unfair allocation and handling of sensitive cases.


“These are some of the instances of clear abuse of power of listing matters and/or re-constituting Benches and assigning matters to such Benches completely contrary to the Rules and the Handbook of Procedure. If these Rules and Procedure prescribed were to apply, such listings and re-allocation of matters could not and ought not to have taken place.

“The pattern also suggests that certain matters which are politically sensitive and involve either Ruling Party Leaders and/or Opposition Party Leaders are assigned only to certain Hon’ble Benches. Although appearing to be “routine”, these listing and/or allocations are clearly designed in a particular direction so as to exclude other Hon’ble Benches from hearing such politically sensitive matters,” says Mr Bhushan in his petition.