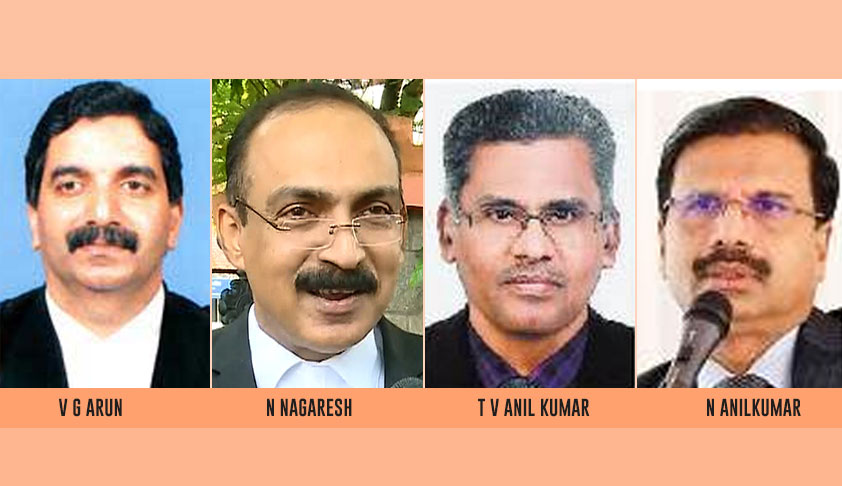 It was on November 1 that the President notified the appointment of four judges, pursuant to the recommendation made by Supreme Court on October 11.

Justices V G Arun and N Nagaresh were practising lawyers at the High Court. V G Arun enrolled as an advocate in 1989, and joined the chambers of Senior Advocate T R Raman Pillai in 1991. His father T K G Nair was a well known writer and journalist who had served as Director of Kerala Press Academy. Known for his composed and sober way of conducting cases, he has dealt with numerous cases in civil, criminal and original sides of the High Court. He has a keen academic passion for law, which made him the Editor of Indian Law Reports Kerala Series in 2005, and he continued to be at the helm of ILR till his resignation following the judgeship.

Justice N Nagaresh enrolled as an advocate in 1989. He started practise at the High Court as a junior to Senior Advocate O V Radhakrishnan. He served as the Assistant Solicitor General of India from 2014 till November 1, 2018, handling cases for Union of India in the High Court.

Justice T V Anilkumar joined the judicial service in 1991. He got promoted as District Judge in 2005. His academic bend of mind made him the director of Kerala Judicial Academy in 2016.

Justice N Anilkumar joined the judicial service in 1991 and got promoted as District Judge in 2005. He was serving as the Registrar General of the High Court since January 2018.

With the appointment of four new judges, the working strength of High Court of Kerala has increased to 38, against a sanctioned strength of 47.