Freedom Of Press In Democratic State 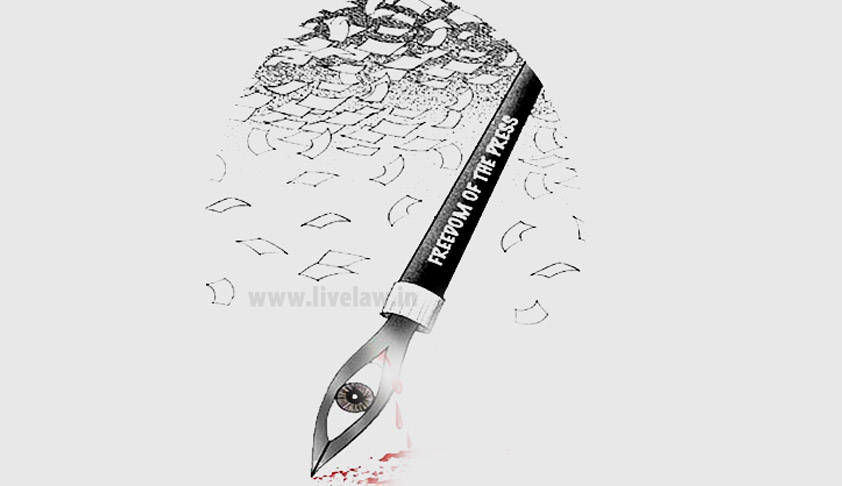 The democracy survives only when there is a serious inter play between public opinion and law making. Informed choice is central, in governance in democratic republic. In "Democracy" every citizen is born with an appetite for information that transforms him as a true citizen. Thus, like a child hungry for food, like diseased need medicine, like underfed needs nourishment, like insecure...

The democracy survives only when there is a serious inter play between public opinion and law making. Informed choice is central, in governance in democratic republic. In "Democracy" every citizen is born with an appetite for information that transforms him as a true citizen. Thus, like a child hungry for food, like diseased need medicine, like underfed needs nourishment, like insecure needs security, the citizen depend upon information for his own strength and need. If a citizen's surge for free flow of information is denied, it would be the death bell of democracy itself. Realisation of a well ordered constitutional State is possible only when freedom is nourished; and that freedom is the life blood of democracy. It is based on the formation of public reasoning, the democracy acts as a catalyst in public governance based on an elected representation.

The democracy cannot exist without public reasoning based on freedom of expression. The role of Press is therefore generally perceived to allow citizen to allow formation of public reasoning to realise their goal in public governance.

Therefore, the right to have a free flow of information and formulate idea of individual in their public conduct, co-exists with Freedom of Press in disseminating information in public domain.

Under Art. 41  of the Constitution, it is the duty of the State to endeavour within the limits of its economic capacity, for securing the right to work, education etc. The directive principles though are not enforceable, nevertheless in terms of liberty of an individual, on the right to have education, the principles have a relevance while amplifying his right under Article 21 of the Constitution. This education is not to be, limited for any learning programme for employment or otherwise. Its reach is beyond learning or knowledge and is to equip him as a reasonable citizen, think ideally for him in the democratic State. The education of individual through dissemination of information and knowledge is the bedrock of democracy. The universal declaration of Human Rights in its Preamble speaks about such right available to the individual. Thus, to exercise political power in democracy, citizen must be educated to actuate his public reasoning. Thus, the media's role has to be understood on the anvil of public function to educate the citizen in terms of his political, social and economic aspiration and development. The liberty of the Press having operational freedom in terms of Art. 19(1) of Constitution must be understood with liberty with responsibility. This responsibility has to be considered from the constitutional scheme of polity and the society as envisaged under the Constitution.

The freedom of Press as has been noted is the paramount in public governance in democratic State. Voicing for the deprived, exploited marginalised people, who may be identifiable collectively as a caste, linguistic or belonging to a particular community or religion is not anathema to the constitutional values. Essence of expression must be with an objective to accommodate their need or right within the Scheme of Constitution. Having plural voices in democracy is conducive to democratic and polity itself. Therefore, any attempt of the Press portraying the voice of the people for their upliftment or emancipation cannot be decried as a foul against the State to deny the constitutional protection of free speech and expression. The Press has full freedom to criticize Governmental policy and decision without any fear or restraint.

The American Courts particularly the Supreme Court of the United States have developed three concepts veering around freedom of speech and expression. These are advocacy, discussion and incitement.

The purpose of the press is to advance public interest by publishing facts and opinions without which a democratic electorate cannot make responsible judgments. In an organised society, the rights of the Press have to be recognised with its duties and responsibilities towards the society. Public order, decency, morality and such other things must be safeguarded.

The impact of media is far-reaching as it reaches not only the people physically but also influences them mentally. It creates opinions, broadcasts different points of view, brings to the fore wrongs and lapses of the Government and all other governing bodies and is an important tool in restraining corruption and other ill-effects of society. The media ensures that the individual actively participates in the decision-making process.

Press and the media perform a public function and discharge a public duty of: disseminating news, views & information; initiating and responding to debates; dealing with matters of current interest in the society in all fields such as politics, morality, law, crime, arts, sports, entertainment, science, philosophy, religion, etc. There is not an aspect related to human rights and human existence which is not dealt with by the press and the media.

The Constitution is the result of collective 'will' of the people to create a legal system with the principles of definite character to regulate themselves. The fundamental values of the Constitution must embrace their conduct in general and collectively, though individual still may have discord. This collective regulation must bind them to retain the collectivity. The public function in the State is therefore, essential to sustain this collectivity for common good. A legal system is understood as a coercive order to regulate the conduct of subjects. The public functionary is a protector and keeper of such order.

There are two primordial freedom with the individual. These are freedom of idea or thought and freedom of expression. These freedom is inherent and inalienable right with the individual. The Constitution of India also categorizes fundamental freedom of its citizen under Art. 19(1). The Press is also having same freedom as available to the individual. Though seemingly individual freedom and freedom of Press appears to be one and the same, it has a significant difference while such freedom is practised. Art. 19(2) sets out area where individual liberty could be restricted. This restriction is in the interest of the State based on State's security, public order, social order; to maintain friendly relationship with foreign States etc. This restriction are ideals and reasons on which freedom of citizen is regulated. Although it reflects enabling power to restrict freedom of individual, it nevertheless forms the very ideal in the legal order in public governance. An individual has freedom to think in terms of his aspiration unless his aspiration confronts with any positive law of the State as framed or enacted under Article 19(2) of the Constitution. His ideas and thoughts even if it is in not conformity with the constitutional values, remain unfettered unless it is encroached upon any area restricted in terms of Art. 19(2) of the Constitution (see S. 153A of IPC, Unlawful Activities (Prevention) Act, 1967). However, Press has no such freedom. The liberty of the Press is to disseminate information or idea in circulation. Since it is public function, it has bounden duty and responsibility to discharge its functions in conformity with the constitutional values and ideals, and without any repugnancy to principles under Art. 19(2) of the Constitution. Therefore, Freedom of Press must take into account, values of constitutional polity as envisaged under the constitution while discharging its function as like any other public functionary under the Constitution. The keeper of such values cannot denounce those values as the same would be repugnant to the responsibility attached to the very nature of the public function being discharged by them. Thus, the Press has inherent limitation on their freedom based on the criteria of restriction under Article 19(2) of the Constitution.