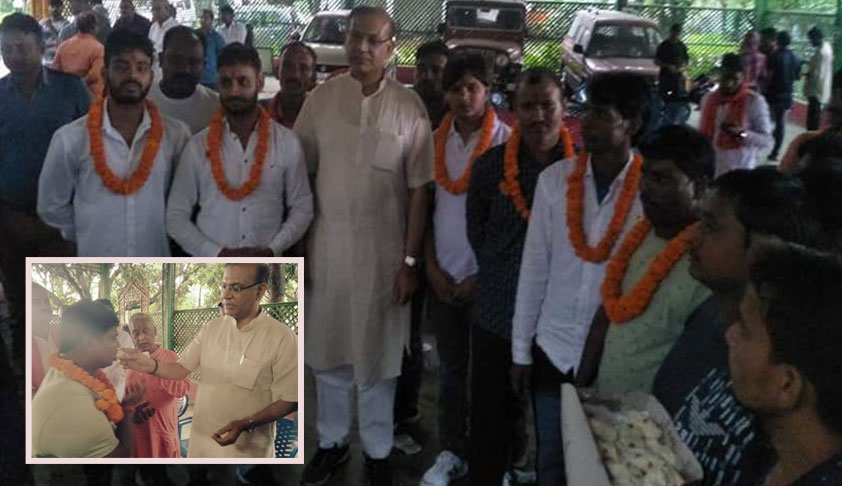 When the political executive oscillates with tacit encouragement and open support for cow-vigilantism, the directives issued by the judiciary, however strong-worded and well-intentioned they are, may not remedy the situation much.It is only with a shudder that one could read the news that a Union Minister publicly feted the convicts in a lynching case. Union Minister of State for...

When the political executive oscillates with tacit encouragement and open support for cow-vigilantism, the directives issued by the judiciary, however strong-worded and well-intentioned they are, may not remedy the situation much.

It is only with a shudder that one could read the news that a Union Minister publicly feted the convicts in a lynching case. Union Minister of State for Civil Aviation Jayant Sinha arranged a heroic welcome to the men who were held guilty in the Ramgarh lynching case when they were released on bail by the High Court and garlanded them. It was during June 2017 that one Alimuddin Ansari was lynched by 11 persons in Ramgarh, Jharkhand, on the allegation that he was carrying cow meat. The cow vigilantes stopped the vehicle in which he was travelling, and dragged him out and assaulted him. The vehicle was also burnt down. Alimuddin succumbed to the injuries sustained in the incident.

In April 2018, a fast track court in Jharkhand held 11 persons guilty for the killing of Alimuddin and sentenced them to life imprisonment. Reportedly, it was the first ever conviction recorded by a court in a case of lynching by cow vigilantes. Eight of them filed an appeal in the High Court of Jharkhand. On July 1, the High Court suspended the sentence of eight appellants and ordered their conditional release on bail.

On the occasion of their release from prison, Union Minister Jayant Sinha, the MP of Hazaribaug which covers Ramgarh, arranged a welcome for them, and garlanded and hand-fed sweets to them, in what could be interpreted as a show of solidarity. When the Minster's act created a furore, he justified his action by tweeting :-

In the Ramgarh case, the Hon'ble Ranchi High Court, which is the first court of appeal, has suspended the sentence of the accused and released them on bail while admitting their case. The case will once again be re-heard.

The Minister's justification that he was "honouring the process of law" is a classic case of double-speak.  These words would have borne some semblance of meaning if those persons were actually acquitted by the High Court.  It is pertinent to note that the High Court has not suspended the operation of conviction. Only the operation of the sentence has been suspended.   They still remain guilty in the eyes of law. The benefit of the presumption of innocence cannot be pressed into service after a person has been found guilty by a court in a full-fledged trial.   Even a person released on bail remains in the 'constructive custody' of the State, as the release is conditional on execution of bond and furnishing sureties.

A group of formal civil servants have issued a statement strongly denouncing the acts of Jayant Sinha, stating "if he genuinely felt that the law should take its course, prudence (if not humanity) dictated that he should have been circumspect in his actions. We strongly condemn his action, which amounts to showing contempt for the rule of law and the Constitution of India, which he is duty bound to uphold"

It will be naive to presume that the Union Minister is not aware of these legal concepts.  Why should the release of a few convicts on bail by the appellate court call for celebration by a Union Minister? Does Jayant Sinha hold similar heroic welcomes whenever convicts are released on bail by the appellate court? On searching for answers to these questions, the peculiar social, cultural and political undertones of cow vigilantism emerge.  Cow vigilantism enjoys de facto legitimacy due to its apparent syncing with majoritarian sentiments.  As it was argued in an earlier article, fringe has become the new mainstream these days. The fringe elements, which used to indulge in lynchings, hate-speeches, slut-shaming, death threats, rabid abuses, etc have gained considerable power and influence over the socio-cultural space over the past few years. They have attained more visibility, and consequentially more acceptance amongst the general public. They seem to be ventilating the ugly prejudices and bigoted aspirations, which the mainstream middle-class have kept suppressed in their psyche to maintain the veneer of respectability.

Incidents of lynching in the name of cow protectionism are crimes with a definite and recurring pattern. The victims are always those living on the margins of the society. The cow-vigilantes are motivated by an urge to impose hegemony of values and cultural homogeneity, by obfuscating diverse practices and beliefs. They intend to arouse fear and insecurity in the minds of minorities and vulnerable communities. They dare to defy the process of law, as their acts are powered by majoritarian sentiments. This is not an issue within the narrow confines of law and order; it plays out on a broader canvass of socio-cultural dynamics. It is the politics of purity which has assumed monstrous proportions, legitimising the use of violence by people to eliminate practices which are impure in their subjective notions. It is the tussle between rule of law and belief-systems. It is the friction between the privileges of the mainstream and the struggles of survival by the marginalized. This is a complex issue which raises the conundrum of whether a democratic government should merely reflect majoritarian will or should pursue higher values of equality and justice.  When an elected representative, who has sworn by the Constitution,  sides with one party in such a deeply divisive issue, it sends constitutional values of equality and pluralism to a toss.

The Supreme Court has taken special note of violence unleashed in the name of cow-protectionism. On July 3, the Supreme Court reserved orders on petitions seeking measures to prevent violence by cow-vigilantes. The Court had reportedly observed that members of any concerned group cannot take the law into their hands.

It is unfortunate that Jayant Sinha committed his act of indiscretion within a few days after SC agreed to pass directions in the petition. This is not a one-off incident. Like violence by cow-vigilantes, support from the elected representatives also come in a pattern. During October 2016, the dead body of Ravin Sisodia, an accused in the Dadri lynching case where Md.Akhlaq was killed on allegations of keeping meat, was draped in the tricolour in a funeral attended by Union Minister Mahesh Sharma. These occasional expressions of open support punctuate long periods of studied silence by the powers controlling the political executive. As expressed in the statement issued by the former civil servants, "the larger and chilling message that Shri Sinha's action sends out is that there is a license to kill minorities and that those who are accused of such crimes will be enthusiastically supported financially, legally and politically". When the political executive oscillates with tacit encouragement and open support for cow-vigilantism, the directives issued by the judiciary, however strong-worded and well-intentioned they are, may not remedy the situation much. Hence, it is with a sense of nihilistic resignation that one awaits the judgment of the Supreme Court to curb cow-vigilantism.

Manu Sebastian is a lawyer at High Court of Kerala .