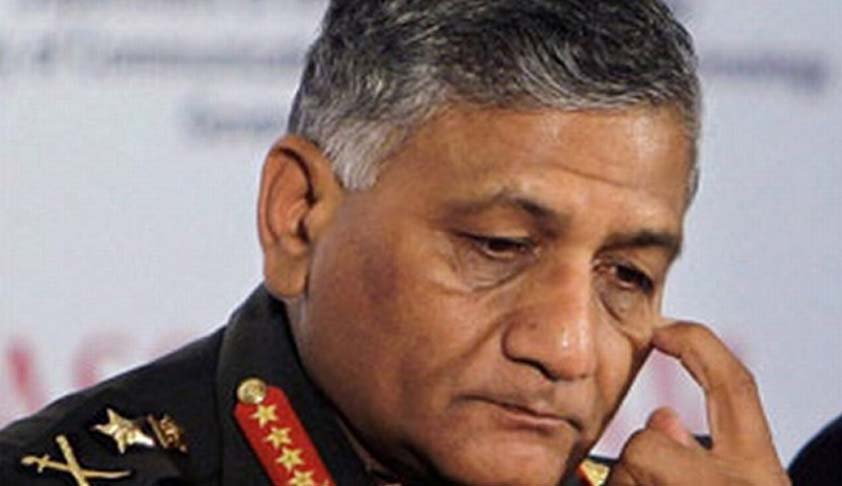 Ex-Army chief Gen V K Singh had to bear Supreme Court’s criticism and harsh words, as he entered court room No. 3 before the bench of Justices R M Lodha and H L Gokhale in the hearing on the suo motu contempt proceedings initiated against him for allegedly attributing motive and doubting the way in which the apex court last year handled his petition seeking change of year of birth from 1950 to 1951.

The former army chief, who had to appear without his lawyer Ram Jethmalani, was at the receiving end of the bench as well as attorney general G E Vahanvati.

On September 22, newspapers had published Gen Singh’s criticism of the Supreme Court’s February 10, 2012 judgment rejecting his petition seeking alteration of his date of birth from May 10, 1950 to May 10, 1951. He stated, “If the court can define the age of a rape victim on the basis of his matriculation certificate then why has the Supreme Court failed to decide my age despite checking and cross checking my certificate?” Against these remarks, the apex court bench headed by Justice Justices R M Lodha and H L Gokhale initiated the suo moto proceedings saying, “This court, therefore, takes cognizance of the criminal contempt and direct that notice be issued to him as to why contempt proceedings be not initiated against him. The same amounts to scandalizing the court and prima facie V.K. Singh’s statement tends to scandalize the judiciary and also tends to lower the authority of the court.”

A request was made for adjournment of the hearing on the ground that Jethmalani was arguing before another bench, to which the Bench showed its discontent saying that since this to be a special bench constituted to hear the contempt matter, one should not take these proceedings lightly. The bench noted that the contemnor’s advocate on record was also not present, and if the lawyers are not present, the contemnor should explain his position.  Asking him to be present in court on November 20 when it will consider drafting contempt of court charges against him, the Bench asked Gen Singh to file his response by November 15.