Gender, Language And The Law 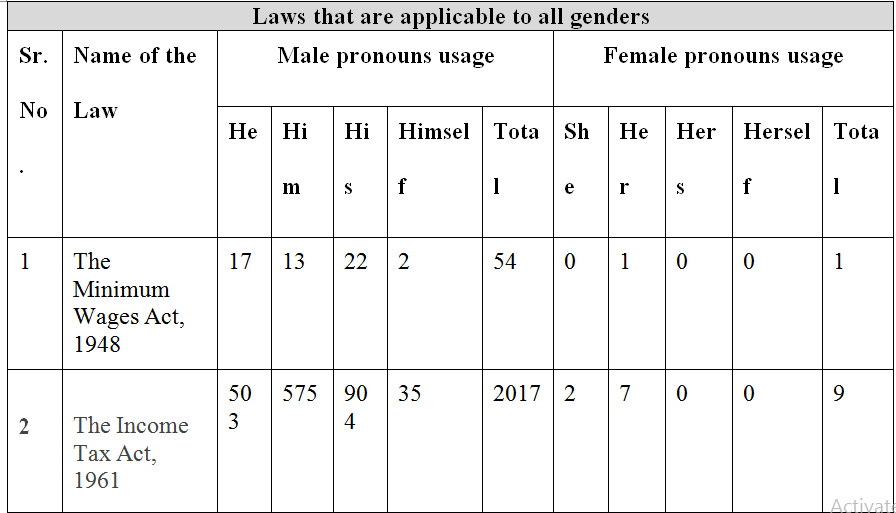 Is there equality of sexes in India? More than 225 years after Mary Wallstonecraft’s Vindication of the Rights of Woman (1792), where she championed the cause of equality of sexes, and more than 75 years of the existence of the Indian Constitution, which guarantees, equality before law and equal protection of law, the Indian legislations or atleast their language tell a different tale....

Is there equality of sexes in India? More than 225 years after Mary Wallstonecraft’s Vindication of the Rights of Woman (1792), where she championed the cause of equality of sexes, and more than 75 years of the existence of the Indian Constitution, which guarantees, equality before law and equal protection of law, the Indian legislations or atleast their language tell a different tale. What’s in language, one may ask? What’s more apt than to turn to Chomsky, the intellectual giant of our times and one who has spent considerable time of his life, writing on language and its importance. In his words, ‘Language etches the grooves through which our thoughts must flow.’ While much has been discussed on the need for change in laws themselves – such as on marital rape, reservation for women, law on sex workers, etc. for protection of gender justice, we don’t discuss an equally, if not more, important aspect of law viz. language.

There is something about the inter-weaving of the gender, language, and the law that should give rise to a deep apprehension about the commitment to gender justice of the Indian republic. Here’s a sample of 20 legislations (statutes) in India and the use of the male and female pronouns in them. Let’s have a look : On examination of 14 laws that are applicable to all genders, selected at random, and 6 gender specific laws, one finds that the law which is meant to be applicable to all genders uses male pronouns predominantly - unless it is referring specifically to women in certain clauses or where it uses male and female pronouns (for e.g., using ‘he or she’). This reaffirms societal constructs of gender as a binary and causes disassociation of other gender identities from their own law. Linguist Luise Pusch says that, ‘Language should be comfortable and fair’. While it may be comfortable to keep using male dominated legislative language, it certainly wouldn’t be fair.

Is the heavy use of the pronoun ‘He’ over ‘She’ just a result of unconscious thought or does it also reflect the deep seated male bastion that the law is. If you are unconvinced that the use of gender biased language should be that big a deal, then consider this. According to a research, countries where people speak gendered language display higher gender inequality. Even as part of Marxist thinking, several writers have commented on the role of law in a capitalistic social formation. (Eg. Sol Picciotto in ‘The Theory of the State, Class Struggle and the Rule of Law’’ Bob Fine in ‘Law and Class’).To that extent the form and the language of law has to be taken seriously, for it is reflective of the social relations. When the language of the law of the land suggests that ‘she’ forever is covered as part of ‘he’, it is difficult to convince our girls that they exist equally as the boys do, independent and on their own. Moreover, this debate should not be about the ‘she’ and ‘he’ as there is a need to break free from this binary and recognize the rights of the third gender too. Gender neutral language in legislations, except where the context otherwise requires, is the need of the hour.  For e.g., the Indian Penal Code clearly defines acts of rape and stalking as acts that can only be perpetrated by a man against a woman, creating a legal void for those who aren’t female or for those who do not fall under transgender, cisgender heterosexual constructs, to exert their right to justice in case of such acts perpetrated against them.

In the United States of America (hereinafter USA), several states have adopted practices or legislations that drive the use of gender neutral language in legislations. In Washington DC, the Substitute Senate Bill 5077, 2013, has made great strides in ensuring the use of gender neutral language in laws, with changes to more than 3500 section of the state code. It has had all references to ‘his’ changed to ‘his or her’ and terms like ‘clergyman’ have been changed to clergy. The Ohio Supreme Court mandated the use of gender neutral language in family court cases and California enacted a law to ensure that the use of terms like ‘husband’ and ‘wife’ was replaced by the term ‘spouse’, post the ruling of the Supreme Court of USA that legalised same sex marriages. Florida continues to make efforts towards making the language of the law more gender neutral, as do several other states in the USA. States like Rhode Island and New York have made efforts towards making the language of their State Constitution gender neutral. There does remain a need for uniformity in such application and the need to use language that is gender neutral in its entirety and not just as a validation of cisgender identities.

In Germany, the federal justice ministry has ruled that bureaucrats are supposed to be as gender neutral as possible in their paperwork. Many countries, like the UK, are also seeing movements to change laws that are currently gender specific in effect. These are mostly laws related to sexual violence and/or abuse. This is part of an effort to account for different gender identities and the possibility that abuse can be faced by any person, irrespective of gender and to move away from the heterocentric approach such laws seem to take.

Canada has criminalised the use of wrong gender pronouns through the Bill C-16, though such law without adequate awareness and societal acceptance may just create more divisiveness, it spells out a step in the right direction towards a more gender equal conception of society. There have also been several attempts by nations to incorporate gender neutral language in everyday usage. Sweden introduced the usage of a gender neutral pronoun in its official Swedish language dictionary - ‘hen’ in 2015, a word that was coined in the 1960s but gained momentum in the 2000s. Such attempts to mainstream gender neutral pronouns and language have a massive impact on what language is used when laws are drafted or legal arguments are made.

Various countries have taken different measures, societal, policy based and legal, to introduce ideas of a gender neutral language at different levels. India can adapt and learn from these efforts and develop a holistic policy that takes a multilevel approach towards gender equality, accounting for the use of gender neutral language. The Constitution of India, under Articles 14 to 18, provides for the Right to Equality to all citizens of the country as a fundamental right. For complete realisation of such equality in terms of gender, linguistic changes form a key link. Changes in the language used in laws can also help create a systemic change in how the legal system and its components look at gender and gender equality. Laws for affirmative action towards women or other marginalised genders should continue to have gendered pronouns, as applicable.

Some proposed solutions towards using language that is gender neutral in laws are as follows :

There is a need to combine efforts and build solutions that have a targeted effect on varied pockets of populations to bring about effective change. In her master-piece on drafting titled ‘Drafting Legislation: Art and Technology of Rules For Regulation’, author Helen Xanthaki discusses some practical tips on keeping the language of the legislation gender-neutral. She offers several tips for the same, one of which is the usage of ‘they’ as a singular noun. Perhaps a class on legislative drafting for our law-makers as a starting point is not such a bad idea.

Avani Bansal is an Advocate practicing in the Supreme Court of India. She has pursued her B.A.LL.B from HNLU, Raipur and Masters in Law from University of Oxford and Harvard Law School. Write to her at [email protected].