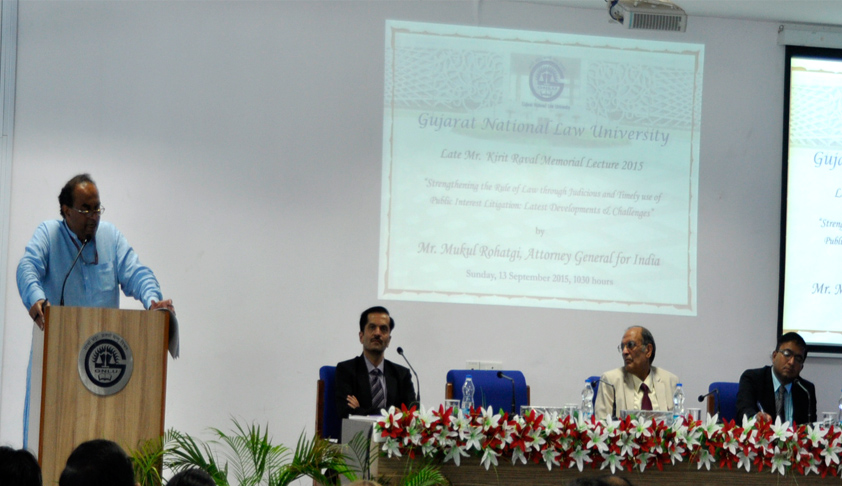 Gujarat National Law University (GNLU) organized the Late Kirit Raval Memorial Lecture commemorated in the memory of Mr. Kirit Raval, the founder Chairman of GNLU and the former Solicitor General of India, on 13 September, 2015. The key note of the lecture was delivered by the Chief Guest of the event and the Attorney General of India, Mr. Mukul Rohatgi. The topic of the address was "Strengthening the Rule of Law through Judicious and Timely Use of Public Interest Litigation: Latest Developments and Challenges”.

The lecture was inaugurated by the Director Bimal N. Patel by welcoming the dignitaries and reminiscing Kirit Raval’s efforts in inception of GNLU. The key note of the lecture delivered by the Attorney General began with him being reminiscent of his association with Mr. Raval. The lecture depicted the era wise development of the Public Interest Litigation (PIL) through citation of various celebrated case-laws. The role of the Supreme Court in dealing with the PIL by supervising many of the cases was also highlighted with an emphasis on the limited role being played by the High Courts in view of the direct supervision of the Supreme Court.

Mr. Rohatgi also emphasized on the need of a larger constitutional bench looking into the existing procedure of filing the PIL and further laying down the guidelines that may limit the misuse of the PIL.

The event was attended by renowned retired Supreme Court Judge C.K. Thakkar, various other distinguished jurists, Raval Family and lawyers. It witnessed a great august gathering and culminated with a Vote of Thanks by Dr. Thomas Mathew, Registrar, GNLU.