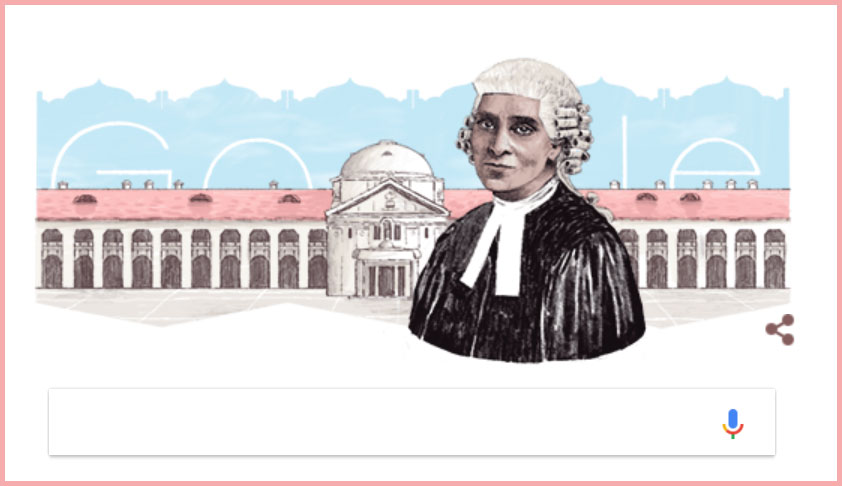 Today's Google Doodle pays tribute to Ms. Cornelia Sorabji, India's first female advocate. The doodle marks her 151st anniversary with a picture of her in an Advocate's gown and white band, with the Allahabad High Court building in the background.Ms. Sorabji was one of the nine children born to Reverend Sorabji Karsedji, a Parsi, and his wife, Francina Ford (a Parsi, adopted and raised by...

Today's Google Doodle pays tribute to Ms. Cornelia Sorabji, India's first female advocate. The doodle marks her 151st anniversary with a picture of her in an Advocate's gown and white band, with the Allahabad High Court building in the background.

Ms. Sorabji was one of the nine children born to Reverend Sorabji Karsedji, a Parsi, and his wife, Francina Ford (a Parsi, adopted and raised by a British couple). She was homeschooled by her father at several of their mission schools.

Her tryst with feminism seems to have begun during her childhood, which was greatly influenced by her mother who strongly advocated for education for women, and even helped establish several girls' schools in Pune. Her mother's views and ideology seems to have shaped the trailblazing work that Ms. Sorabji would go on to do.

However, her path was not one without obstacles. Even after topping her college in English Literature, she was denied a scholarship to study in England. She was not the one to give up though. She approached the National Indian Association, after which several prominent personalities of the time, like Mary Hobhouse, Adelaide Manning, Florence Nightingale and Sir William Wedderburn stepped forward to fund her education in Britain.

Her experience in Britain was not less troublesome. While she was initially denied the permission to pursue law, it was the influential academic and philosopher Benjamin Jowett who got a special law course devised for her. He arranged for her to take the Bachelor of Civil Laws exam at Somerville College, Oxford, helping her to be the first woman to ever do so in 1892.

While she did succeed in passing the exam, she could not get hold of her degree as there existed a rule at that time barring women from collecting their degrees for the next 30 years.

She then returned to India in 1894, hoping to utilize her legal acumen for women in the country. She was, however, let down again by the Bombay High Court, which barred legal practitioners from employing women.

Nevertheless, Ms. Sorabji took up the cause of purdanashin woman who, according to Hindu law, were forbidden to communicate with any male persons apart from their husbands. Since all lawyers at that time were men, these women were always left without legal representation to defend their property rights.

While women were not allowed to argue in the Courts at that time, Ms. Sorabji led a relentless crusade, petitioning the India Office to provide for a female legal advisor to represent women and minors in provincial courts.

The opportunity came to her only in 1904, when Lord Broderick, who was appointed Secretary of State for India, advocated for appointment of women as advisors for the secluded ones. She was then appointed as the Lady Assistant to the Court of Wards of Bengal, and she started to work in the provinces of Bengal, Bihar, Orissa and Assam.

In the next 20 years, according to The Better India, she helped over 600 women and children, providing her services free of charge on a lot of occasions. Her struggle bore fruits when Courts in British India finally opened their doors to female advocates in 1923. She then began to practice in Kolkata till 1929, after which she retired and shifted to England.

She spent her last days in London and passed away in London in 1954, but not before breaking the glass ceiling for female practitioners in the country and abroad.