Government And Its Naamkaran Ceremonies: Understanding The Procedure Of Renaming Of States And Cities In India 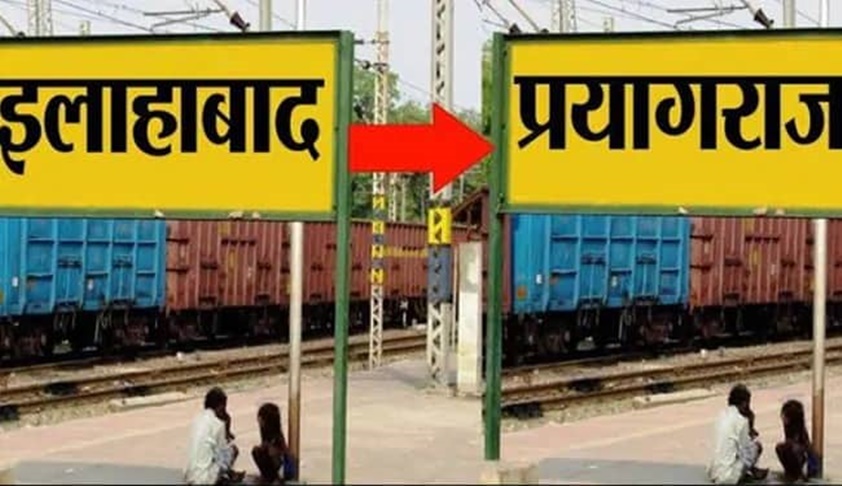 ‘Naamkaran’ is the ceremony when a newborn is bestowed with a name by her/his parents. This name then becomes her/his identity and follows her/him for all his life. Although people do change their name, the occurrence is rare. Several state governments, however, are making this rare occurrence a commonality by way of undertaking this ceremony to states and cities in India. Uttar Pradesh...

‘Naamkaran’ is the ceremony when a newborn is bestowed with a name by her/his parents. This name then becomes her/his identity and follows her/him for all his life. Although people do change their name, the occurrence is rare. Several state governments, however, are making this rare occurrence a commonality by way of undertaking this ceremony to states and cities in India. Uttar Pradesh Chief Minister Yogi Adityanath leads this, with his recent spree of renaming the cities of Uttar Pradesh. Subsequently, such renaming has even become an electoral practice, as witnessed in Telangana, where Adityanath promised to rename Karimnagar to Karipuram[1] and Hyderabad to Bhagyanagar.[2]

The governments have made the procedure seem like a piece of cake, depending on their whims and fancies. However, to their dismay, that is not the case. The Constitution of India and laws made therein, stipulate a detailed procedure before any alteration of names can take place. In the present post, I discuss the said procedure. The post shall cover the procedure for changing the names of both the states and cities. This shall be followed up by discussing the recent Yogi spree as well.

The renaming of states is governed by Article 3 of the Constitution of India. The Article empowers the Parliament to alter the name of any State by law. The procedure for the same is as follows:

Step 1: The Parliament recommends a Bill for renaming the state

Step 2: The Bill has been referred by the President to the Legislature of that State for expressing their views.

Step 3: The Bill is passed in each House (Lok Sabha and Rajya Sabha) by a majority of total membership of the House i.e. 2/3 members present and voting

Step 4: President gives his assent to the Bill

Step 5: The change in name of the state is recorded in First and Fourth Schedule of the Constitution (Schedule containing the names of states)

Following the said procedure in 2010, the name of Orissa was changed to Odisha, by passing of the Odisha (Alteration of Name) Bill, 2010.[3] Recently, a proposal was floated by the Chief Minister of West Bengal to rename the state as ‘Bangla’.[4] However, the central government refused to introduce a Bill to the effect. While, many have termed this a political tactic, one should note, that the government’s refusal is constitutional as under Article 3, the decision to introduce a Bill to the effect, is discretionary .

In India, ‘land’ is a subject of the State List under the VII Schedule of the Constitution (Entry 35). Therefore, the state government is empowered to legislate and regulate the same. Some Constitutional scholars believe that the power to rename cities vests with the states under this entry.  Therefore, unlike renaming of states being the prerogative of the central government, renaming of cities is the prerogative of the state government.  Several states in India have legislations to that effect. For instance, states of Maharashtra and Uttar Pradesh incorporate the provision in their Revenue Code, whereas others have it in their respective Reorganization Acts[5].

The above legislations require a mere notification in the Gazette for changing the name, which means a Cabinet decision to that effect is required. However, the Central Government through the Ministry of Home Affairs added the additional requirement of obtaining a No-Objection Certificate from the Centre as well,[6] which has been accorded judicial validity in Sharan Desai v. State of Karnataka.[7]

The Notification issued in 1953 (‘MHA Guidelines’),[8] states that for changing the names of villages, towns/cities, railway stations etc., the state government shall be required to submit a proposal which would then be considered in the Union Ministry of Home Affairs (MHA). Only if found appropriate, the MHA conveys its  ‘No Objection’ to the State Government concerned for issuing  required Gazette Notification.

The Union has also issued guidelines[9] which are to be considered by states while considering renaming of the cities/towns. The guidelines read:

Finally, while recommending any change, the state government should furnish detailed reasons for proposing the change in the name and also for selecting the new name.

These guidelines and the No Objection Certificate came into play, when several cities in Karnataka underwent a name change. The gazette notification was issued only after a clearance from the Centre.[10]

Having discussed the general procedure for renaming the cities, let’s address the recent name changing spree, witnessed in Uttar Pradesh. The state witnessed the change of ‘Allahabad’ to ‘Prayagraj’; change of ‘Faizabad’ to ‘Ayodhya’[11] and has many more such changes announced/planned.

As discussed above, the procedure for changing names of cities is within the domain of the states, governed by their respective state legislations. However, a no objection certificate from the Centre is also mandatory. Interestingly, none of the above was complied with during the changing of city names in Uttar Pradesh.

Violation of the Revenue Code:

The legislation governing altering of names in Uttar Pradesh is the UP Revenue Code.[12] Under Section 6 of the statute, the state government may by notification alter the name of any such revenue area. The Act however, provides a detailed procedure to be followed when such an action is taken up.

For such an alteration to come into effect, the state Government is required to issue a notice and publish the proposal inviting objections.  It is also mandated to take into considerations, such objections. The Courts through several pronouncements have emphasized on the mandatory nature of the above procedure. So much so, that the Odisha High Court (the state has a similar statute), struck down a change of name, when it found non-application of mind in the decision.[13]

Sadly, the procedure was not followed by the UP government. The proposal was moved and swiftly approved, without calling for any objections.

The recent alteration of names violates the MHA Guidelines as well. The guidelines as discussed had cautioned against changing of a name which people have got used to. The exception was special circumstances justifying the need for the change. In the cases of Faizabad and Allahabad, not only were people accustomed to the name,[14] the government did not provide any special reasons for the change. A No Objection certificate from the Centre was not obtained either.

While adjudicating a case on alteration of city names, Justice Chapalgaonkar of the Bombay High Court, made a pertinent point. He wrote, ‘Changing of names, are political decisions dependent on the concept of propriety of the authority’. The veracity of this statement can be understood from two instances.

First, in 2018, proposals to rename 25 cities have been approved by the Centre, whereas the proposal to rename West Bengal has not even been considered. Second, the proposal to change the name of Allahabad, which was rejected in 2001 as it did not fit the MHA criteria, has been approved, without even being sent to the MHA and devoid of the mandatory no-objection certificate.

One cannot be in oblivion of the fact that all these name-changing instances represent an ulterior agenda, one which holds the poisonous risk of disrupting the secular fabric the Constitution seeks to protect.  Individuals for their group identities with the people who come from the place they hail – it often is the only homogenous trait emerging strongly in a heavily heterogeneous nation like ours. To engage in an exercise which confuses or even attacks this sense of common identity is certainly unbecoming of any Government, let alone the Constitution.

The author is a Fifth Year, Constitutional Law (Hons.) student at National Law University, Jodhpur. The article was first published at the author’s personal blog “The ‘Basic’ Structure”.

Saving powers of State Governments.—Nothing in the foregoing provisions of this Part shall be deemed to affect the power of the Government of Uttar Pradesh or Uttaranchal to alter, after the appointed day, the name, area or boundaries of any district or other territorial division in the State.

[14] From Illahabas to Allahabad to Prayagraj who cares and why, Hindustan Times (Dec. 19, 2018) https://www.hindustantimes.com/india-news/from-illahabas-to-allahabad-to-prayagraj-who-cares-and-why/story-4WfV2fEKeIid4bHExb6d3O.html