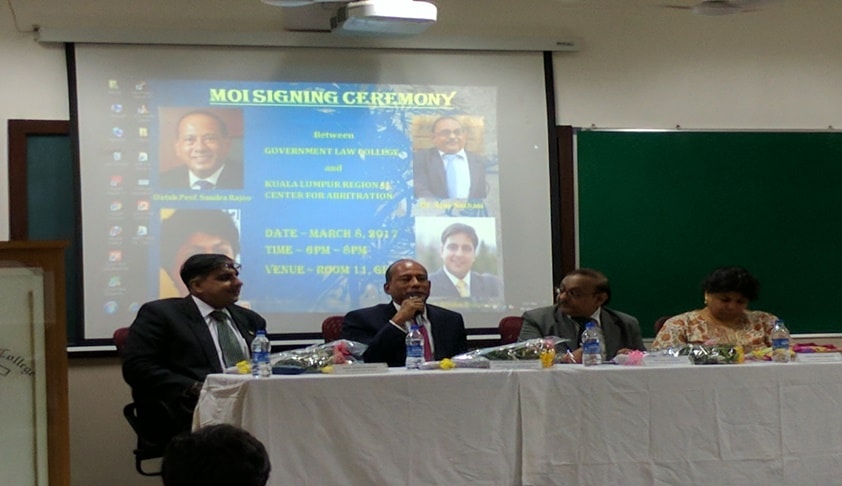 The ADR Cell of Government Law College, Mumbai (GLC) was launched in October, 2016 with the objective of promoting ADR through academic pursuits and skill building. It recently reached out to the international ADR community for broadening its horizons.The ADR Cell hosted Datuk Professor Sundra Rajoo, Director, Kuala Lumpur Regional Centre for Arbitration (KLRCA) at GLC on the 8th of...

Subscription starts from
₹ 599+GST
(For 6 Months)
View Plans
Premium account gives you:
Subscribe Now
Already a subscriber?
Login
The ADR Cell of Government Law College, Mumbai (GLC) was launched in October, 2016 with the objective of promoting ADR through academic pursuits and skill building. It recently reached out to the international ADR community for broadening its horizons.

The ADR Cell hosted Datuk Professor Sundra Rajoo, Director, Kuala Lumpur Regional Centre for Arbitration (KLRCA) at GLC on the 8th of March, 2017.  He addressed the students on “Internationalization of an Arbitral regime through Institutional Arbitration”. The theme revolved around how Institutional Arbitration has triumphed over Ad Hoc Arbitration in the process of achieving global uniformity in Arbitration. He emphasised that the universal acceptance of the UNCITRAL model has streamlined the procedural rules of different Arbitral Institutions in the world. He explained to the attendees the ten basic points of significance; key to develop efficient and effective institutions for arbitration; exploring arbitration in Common, Civil and Sharia law.

Sharing the Malaysian experience in the use of Institutional Arbitration, he enlightened the students on how Institutional Arbitration clearly wins in terms of cost-effectiveness, time and discipline over Ad Hoc Arbitration. With the recent inauguration of the Mumbai Centre for International Arbitration (MCIA), India is just warming up to the already well-matured arbitral regimes around her. He opined that facilitating formation and evolution of effective arbitral institutions is paramount to the successful integration of the country’s arbitral regime with the rest of the world. Datuk Professor Sundra Rajoo gave a brief comparison of the development of Arbitration Institutions in the West and the East elucidating the need for higher number of institutions in Asia due to increasing number of disputes in this part of the world.

The event was graced by Dr. Ajay Nathani (Principal, GLC) and the ADR Cell Faculty Advisors - Professor Sunita Masani and Professor Kishu Daswani. The speakers, while addressing the students focused upon the necessity of alternative and peaceful modes of resolution of disputes over adjudicatory and adversarial methodologies.

The intention for a prospective collaboration between KLRCA and GLC through the ADR Cell was expressed by the dignitaries. The prospective collaboration would provide for resource sharing between the two institutions focusing on developing under-graduate and post-graduate courses; organising joint conferences, seminars, workshops, and student internship programmes; conducting joint research programmes, short courses and training programmes for institutions and staff attachment for enhancement of knowledge and understanding in the field of ADR among other things.

It is no coincidence that GLC is leading the race in promoting effective alternative modes of dispute resolution. The alumnus of GLC includes the current Honorary President & Advisory Member of the International Council for Commercial Arbitration, Mr. Fali Nariman; member of the Permanent Court of Arbitration, Mr. Soli Sorabjee; first Indian lawyer to be appointed as the Director (South Asia) for the International Court of Arbitration, ICC, Mr. Abhinav Bhushan; and the second-in-charge of KLRCA, Ms. Smrithi Ramesh.

With the recent amendments to the Arbitration and Conciliation Act, 1996 poised to address various issues plaguing the Indian arbitration regime, their degree of success remains to be seen. India is warming up to the idea of Institutional Arbitration. Therefore, there couldn’t have been a more opportune moment to begin a prospective collaboration with the KLRCA. Thus, with this endeavour taken by both the institutions to collaborate over shared synergies, it is aimed to be a new beginning towards global exposure for students in the ADR arena.
Next Story
Similar Posts
+ View more
Webinars
+ More
Law Firms
+ More
Latest News
+ More
लाइव लॉ हिंदी
+ More
International
+ More
Environment
+ More