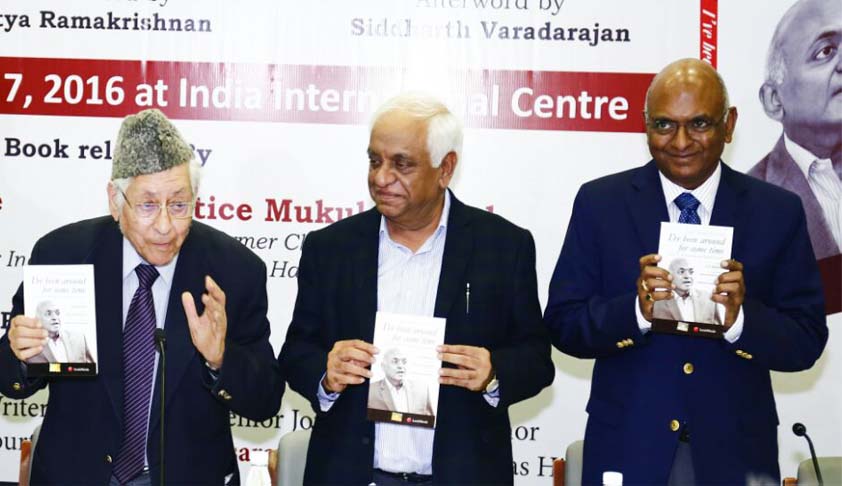 Raju Ramachandran belongs to the rare category at the Supreme Court bar, who inspite of immense work pressure manage to grab a pen and nourish their academic side. His book ‘I’ve been around for some time’ is a collection of few of his columns, articles and interviews published in his 36 year long (and still going strong) tenure as an advocate. The book collects 58 pieces divided in...

Raju Ramachandran belongs to the rare category at the Supreme Court bar, who inspite of immense work pressure manage to grab a pen and nourish their academic side. His book ‘I’ve been around for some time’ is a collection of few of his columns, articles and interviews published in his 36 year long (and still going strong) tenure as an advocate. The book collects 58 pieces divided in 8 chapters and runs into 216 pages. What makes it even more special is a beautiful set of Foreword by A G Noorani, Middle word by Nitya Ramakrishnan and Afterword by Siddarth Varadarajan. While Noorani termed his writings to reflect what Walter Lipperman called ‘The Public Philosophy’, [email protected] 111 quoted his collection of stranger stories and that he interestingly found a tamil speaking bihari muslim in Delhi’s Khanna market and Sidddarth Vardarajan called him a lucid and dispassionate guide.

Raju Ramachandran, has written a beautiful note before the first chapter and carved out a distinction between his pre 1998 and post 1998 writings. He has written that after 1998 the been around for sometime has changed to quite sometime.(‘I’ve been around for quite some time’ which is also title of an article he wrote for the inaugural journal of the Supreme Court Bar Association). It is a well known fact at the bar that there are few things very close to Raju Ramachandran’s heart, mind and soul which find place in the book through his articles as well. The Keshavananda Bharati Case, the hearings of which he observed as a law student. He has been perhaps the strongest critique of the Basic Structure Doctrine (BSD) & Presidentialism and perhaps the best mooter for separation of powers, constitutional tort and free speech. Then, he has extensively written on judicial independence and lacunas in the self-selecting process of judges’ appointment &their removal procedure apart from need for controlling a hyperactive judiciary. He has strongly advocated time management in courts, time limit on oral advocacy, a permanent constitution bench of 5 judges, devaluation of Law Officers (that too having being served as ASG) and a minimum tenure of the CJI(PS - @Pg 60 where he noted that there has not  been a single occasion when a judge has renounced the high office of CJI to make way for a colleague who would have a longer tenure and would, thus, serve the institution better).He has also throughout highlighted need of All India Judicial Services. His favourite line from a judgment seems to be part of Justice Pandian’s judgment in the Mandal case (1992) wherein he expressed great anguish on prevalent nepotism and favouritism in judicial appointments. And he has repeated, with more and more vigour over the years – “A weakened political class has over the last four decades meekly surrendered to judicial supremacy.”

There are numerous instances which he has noted- When BRL Iyengar was asked by an admirer judge that they see him rarely now, Iyengar replied “My Lord, a senior counsel is not a brick-layer or a mason who is expected  to reach the site of work at the  appointed time every day; the appearance of a senior is an event.” Then there is an instance when seniors increased their fees too much and another doyen at the bar, Sanjay Hegde used humour at its best to point it out.  When Indira Gandhi asked Krishna Iyer about BSD, he asked her “Can India be converted to a theocratic state”, she relied “Obviously not”. “That’s what the doctrine means” Krishna Iyer told her. He has also reasoned why he had to decline a court duty when the Supreme Court had asked him to be a part of the SC Commissioners team in the Kanahaiya Kumar case at the Patiala House Court as his presence in a surcharged atmosphere could have been provocative.

In his chapter “Different People”, Raju Ramachandran has preferred to compile his writings on the less talked about but much more important M.K.Ramamurthi, Danial Latifi, Barry Sen, Vinod Bobde and Shyamala Pappu. However, he is quite an aficionado of Palkhivala, Andhyarujina and Seervai as well. Particularly Andhyarujina whom he has reviewed as well.

His writings teach and tell a lot. Having started my career as a Law Clerk with Justice Kurian Joseph, it gave me immense satisfaction to read that the first set of Law Clerks comprised of the very eminent; Professor Mool Chanda Sharma and Amita Dhanda (Justice Bhagwati). Only Raju Ramachandran could have criticized a giant doyen of the bar and father of a sitting judge, Fali Nariman for critically evaluating Justice Chelameshwar’s decline to attend collegiums meetings and call it ‘disturbing’. His writings on global issues range over the position in South Africa, Hong Kong, Pakistan, Ulster, Bangladesh and apartheid along with updated end notes by notable experts. In his interview on Section 377, he categorically mooted that the challenge and the fight is not for scrapping Section 377 completely but to decriminalize private consensual acts between majors, which the Supreme Court had entirely missed.

Although I am too naïve to select favourite lines, but if I am to pick two lines from the entire book, I will turn to Page 19 where he wrote – “Success in today’s courts depends on the skill with which you can obtain an interim order, not on the contribution which you can make to the growth of the law.” This single line suffices the current state of prevalent state of the bar. The art of advocacy, the delicacy of arguments and the zeal to convince the bench has become so rare that only loud voices come out of the court rooms. As young lawyers we look to the kind of Raju Ramahandran, Arvind Datar, K.K.Venugopal and P.S.Narasimha who argue and field questions from the bench with wonderful caliber, to nourish and nurture young generation of lawyers. The second is at the bottom of Pg 46 where he wrote – “Constitutionalism is not and should not be the monopoly of the legal fraternity”. Perhaps the Supreme Court will understand it someday.

It is famously said – “He who walks in another’s tracks leaves no footprints”. Raju Ramachandran is amongst the very few who chose their path, made their way and reached pinnacle of the profession. The book gives an insight into how a practitioner’s views are different from armchair critics. It is further more important to note that the author is amongst the very few have worked against the clock and have had the courage to speak out their heart and call a spade, a spade. Except a minor typographical error at pg 45 (Para 2, it should be Article 156 instead of Article 256), the book is flawless and neat. Quality wise and quantity wise, the book is extremely useful, a must keep in your shelf and a must read for professionals, students and academicians.