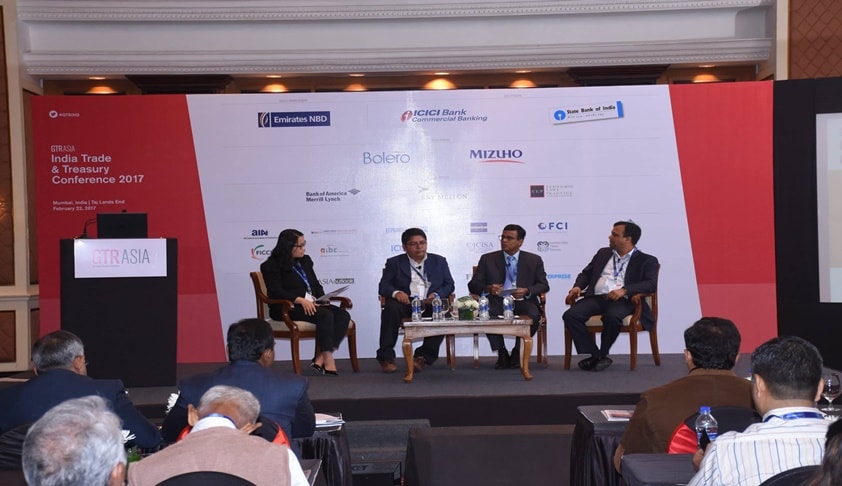 The GTR Asia India Trade and Treasury Conference, 2017 was organized on February 22, 2017, at Taj Lands End, Mumbai. Returning for its 14th year, the conference also included treasury and fintech aspects relating to trade.It witnessed several worthwhile discussions, ranging from the mechanisms, structures and risk management strategies to succeed in the Indian market, to the transformation...

The GTR Asia India Trade and Treasury Conference, 2017 was organized on February 22, 2017, at Taj Lands End, Mumbai. Returning for its 14th year, the conference also included treasury and fintech aspects relating to trade.

It witnessed several worthwhile discussions, ranging from the mechanisms, structures and risk management strategies to succeed in the Indian market, to the transformation of trade and export finance by technology, and the opportunities and challenges for the financial sector in light of the same.

“Disruptive technologies including fintech and blockchain are game changers for the financial industry and can potentially revolutionize the way trade and financing is done in India today, leading to greater efficiency, cost minimization and increases in cross-border trade,” the conference brochure stated.

While one of the panels examined the security concerns for fintech, and explored the preparedness of the banking sector to move away from paper-based trade, another held discussions on sketching a roadmap for trade financing in India, exploring new financing options for SMEs, analysing the usage of cluster financing by SMEs to diversify risk, and scrutinizing India’s preparedness to move away from traditional letters of credit.

Further, one of the sessions gave the trader perspectives on the outlook for trade and commodity finance. The panel discussed the price fluctuations and trade volume forecasts across India’s key commodities, and identified new markets and emerging hubs for trade. It also reflected upon the usage of the National Commodity and Derivatives Exchange’s (NCDEX) guidelines for warehouse service providers, in strengthening the risk management framework for warehouse financing.

LiveLaw got into a conversation about the Conference with Babu Sivaprakasam, Partner, Head of the Banking and Finance Practice of Economic Laws Practice, who said, “Bridging the funding gap for MSMEs is the crying need of the day and no wonder the conference also had a lot of focus on that. Similarly, digitization was another area which has rightly attracted lot of attention.”

When asked about the security concerns, he said, “The regulations have to evolve as the technology grows and obviously there will be lagtime. The conference also clearly emphasized that in pursuit of ease of doing business and achieving transparency, security can’t be compromised. In that quest, many bankers at the conference revealed that they are in the process of developing softwares and platforms and are in various testing stages and few are on one-to-one on-boarding of their clients as well. One has to wait and watch to see emergence of digitization and blockchain concept as an impactor on the industry especially on the trade sector, while laws and regulation get parallelly formulated.”

Mr. Sivaprakasam, however, expressed that he expected more representation and inputs from public sector banks at the conference, as they have a huge role to play since they cater to a large proportion of MSMEs. He was further of the opinion that digitization and technological advances in the Indian banking and trade sector is a “need and requirement”, rather than a “want or wish”, and that any disruption would be met with parallel solutions and regulations as has been witnessed in the past.