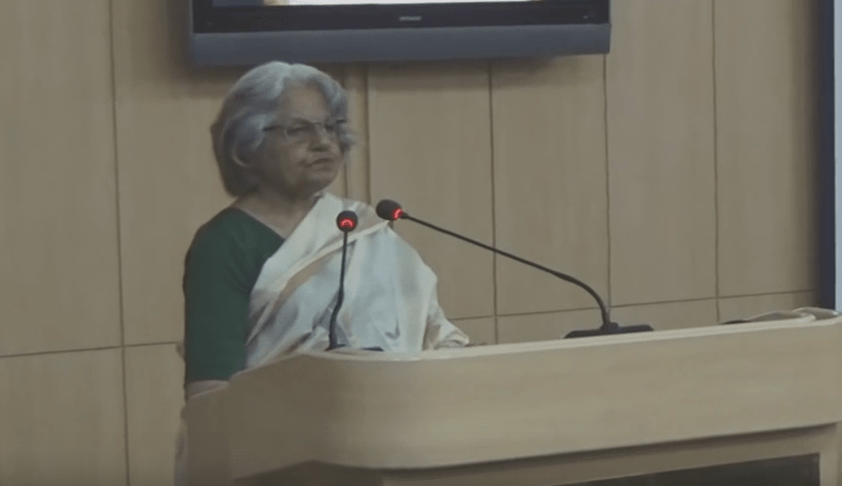 As part of the NALSAR Lecture Series on Constitutionalism, Ms. Indira Jaising delivered a lecture on the above mentioned topic on February 4, 2017 at NALSAR University of Law, Hyderabad.The talk was largely on the constitutionality of a number of provisions of criminal law in India, both the ones that have been part of the IPC since it was first drafted and the recent amendments made by way...

Subscription starts from
₹ 599+GST
(For 6 Months)
View Plans
Premium account gives you:
Subscribe Now
Already a subscriber?
Login
As part of the NALSAR Lecture Series on Constitutionalism, Ms. Indira Jaising delivered a lecture on the above mentioned topic on February 4, 2017 at NALSAR University of Law, Hyderabad.

The talk was largely on the constitutionality of a number of provisions of criminal law in India, both the ones that have been part of the IPC since it was first drafted and the recent amendments made by way of the 2013 Act. She started the talk with one of the issues during the drafting stage of the Criminal Law Amendment Act, 2013, which was whether rape should be made gender-neutral, in order to cover men and the LGBT community. Ms. Jaising herself is of the opinion that ‘rape’ itself is gendered and that it is important to keep it that way, as the act of rape happens not just as a random act of sexual violence, but as part of the systemic oppression that women are subjected to in a patriarchal setting.

Then she moved on to the challenges that have been brought so far against certain criminal law pro-visions, like the constitutionality of Section 377 of the IPC, the death penalty challenge and the se-dition law challenge, and she stated that there are other provisions that have not been challenged yet but can be struck down as being unconstitutional.

She then discussed the origin of criminal law and traced how the understanding of ‘crime’ has changed, right from the Middle Ages to the present age. With the Church playing a major role in Europe, loyalty to the Church and God was used as a yardstick to determine whether something was a crime or not, and from the late 16th and 17th centuries, that is, during Renaissance, a rational approach to crime was taken and the idea that punishment given should be proportionate to the gravity of the crime committed emerged. With the advent of the 20th century, there was a sharp turn, and crimes are now understood as acts that violate human rights. Therefore, personal autonomy of individuals became important, which allowed people to act based on their own set of beliefs and religion, and one’s relationship with God became a private affair. This primacy that is given to individuals’ right to autonomy has also resulted in the State taking it up as its role to protect people’s choices, and this is reflected in the recent amendment to the law on rape, where consent is required to be expressly given by a woman, that is, lack of physical resistance would not make it consensual.

On the question of the mandatory minimum punishment for rape, which is seven years after the 2013 amendment, Ms. Jaising argued that it can be challenged on the ground of unconstitutionality in that it goes against the principle of proportionality. People who advocate for doing away with the mandatory minimum argue that there cannot be one sentence that fits for a crime in general and that the amount of punishment should be determined on a case-to-case basis. She discussed a Canadian case law where a mandatory minimum sentence for a drug offence was challenged and the majority held that such a provision was unconstitutional, and that what constitutes a proportionate sentence for an offence must be determined with regard to the objective and principles of sentencing.

However, on the question of the aggravating versus mitigating circumstances test inevitably becom-ing a consideration, she expressed her discomfiture on giving credence to any mitigating circums-tances when it comes to the offence of rape. She also noted that a possible argument against the mandatory minimum sentence can be of the legislature usurping the judiciary's power. However, she did state that in India, we do not have proper guidelines on the amount of punishment, and in the cases before the amendment, when judges gave sentences below the minimum, they used to give extremely sexist reasons for the same, and therefore she remarked that this could be one of the rea-sons why the discretion to decide the quantum of punishment has been taken away from the judges.

On the issue of marital rape, she spoke about how despite marital rape still not being an offence in India, there has been a little bit of progress. Earlier, it was only an offence if a husband raped his wife when they were ‘judicially separated’, but now, under the new amendment, the word ‘judicial-ly’ has been removed and therefore, it is an offence when a husband rapes his wife when there is de facto separation. On the other hand, amending the age of consent and increasing it from 16 to 18 has had serious consequences for children within that age-group. Sexually active people in the age group 13-18 are affected negatively because their consent is not taken into account and their right to health, including the right to abortion, and doctors’ duty to keep their information confidential un-der the MTP Act has been compromised with a parallel law on Child sexual abuse, i.e., the Preven-tion of children from sexual offences (POCSO) Act, which places a mandatory obligation on teach-ers and doctors to report incidents of sexual abuse. Therefore, two questions become important in this context: one, if the law violates the right to health of such children; two, if the law takes away from children below the age of 18, their right to make decisions autonomously. Ms. Jaising stated that these provisions in the amendment are based on traditional concepts of morality, and they do undermine the ability of people below a certain age group to make rational choices. She also pointed out the inherent contradiction in law, where it is legal for a man to have sexual intercourse with his wife above the age of 15. She referred to a case in South Africa, Teddy Bear Clinic vs. Minister of Justice, where the Court did strike down a law which made it a crime for children between the ages of 12 and 16 to engage in consensual sexual activity, as unconstitutional. The Court used the ‘best interests of the child’ principle and recognised the personal autonomy that these children have.

The talk ended with a Q&A session with questions pertaining to morality and the law, individual autonomy in decision-making, the possibility of making marital rape an offence, constitutional chal-lenge to personal law provisions, reading down S.377, etc.

The video link for the talk is this -