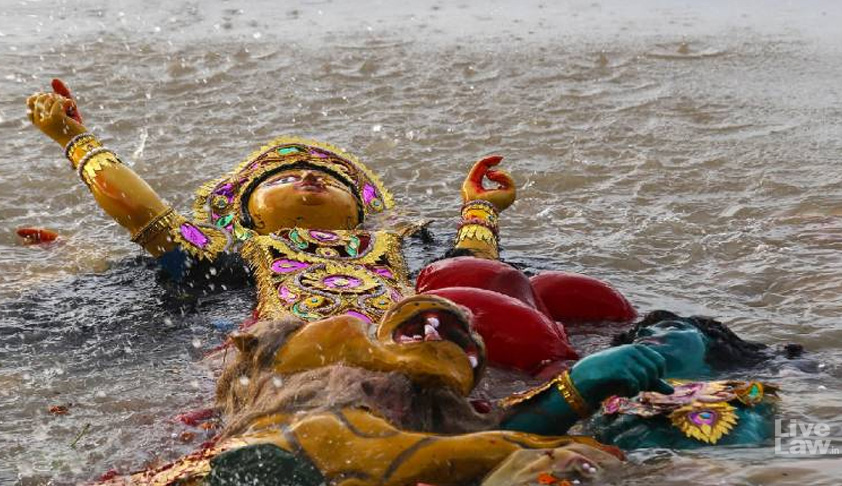 The Gujarat High Court has banned idol immersion in river Tapi which passes through Surat and other natural rivers in the State while directing the authorities concerned to ensure that immersion of idols is prohibited not only during Ganesh Visarjan, but also on other similar festivals, including Durga Puja, Janmashtami, Moharam etc.

In passing the order, a bench of Chief Justice R Subhash Reddy and Justice Vipul M Pancholi affirmed the ban order passed by Surat Municipal Corporation earlier this month wherein it had also appealed to the citizens to opt for eco-friendly idols which can be immersed at home or mandaps.

The order of the court came on a petition moved by Surat Citizens Council Trust through advocate Amit V Thakkar.

Advocate Thakkar sought directions to the authorities concerned to prevent the immersion of idols into river Tapi, one of the largest rivers passing through Gujarat, and follow the guidelines of CPCB, and create/construct temporary artificial ponds with earthen bunds not less than 45 in numbers and/or as per requirements as per estimated idols for the purpose of immersion of idols, in Surat.

He had submitted before the bench that over 60,000 Ganesha idols were installed in the City of Surat during 2017 for Ganesh Chaturthi and majority of idols are being immersed in river Tapi, causing health and environment problems for the residents of Surat.

During the arguments, he also informed the court that during the pendency of the petition, the Surat Municipal Corporation has passed an order banning idol immersion in river Tapi.

Taking the same on record, the bench disposed of the petition with following directions:

(i) We place on record, ban orders issued by the Municipal Corporation banning immersion of idols in River Tapi.

(ii) The respondent authorities to see that immersion of idols in River Tapi and other natural rivers in the State shall not be allowed not only during Ganesh Visarjan but also on other similar festivals including Durga Puja, Janmashtami, Moharam etc.

(iii) The Municipal Corporation shall give widespread publication about artificial ponds created, in different zones for immersion of idols.

(iv) The respondent Municipal Corporation shall take steps for public awareness programme through newspaper advertisement and electronic media to prevent immersion of idols in River Tapi and other rivers.

(v) Ban orders issued by the Municipal Corporation for banning immersion of idols in Tapi River should be communicated to the citizens through print media, by way of news item in all leading newspaper having wide circulation in the City of Surat.

(vi) The respondent authorities to take steps for the public awareness programme for manufacturers of idols to manufacture eco-­friendly idols.

(vii) The respondent authorities shall take all possible steps for implementing guidelines for idol immersion issued by Central Pollution Control Board in June 2010, for the festival of all religious communities.

Following the order, Thakkar said, “The order is likely to benefit not only several million citizens of State but also marine life and animals who are affected by river water pollution. Rivers will be saved from the pollution of chemical, POP etc., due to the immersion of thousands of idols, throughout the year in various festivals. The number goes increasing and a time has surely come to protect rivers at least for the coming generations.”