Gujarat HC refuses to suspend the Conviction of BJP MP; Consequence of Disqualification as MP not a ground to stay Conviction [Read Judgment] 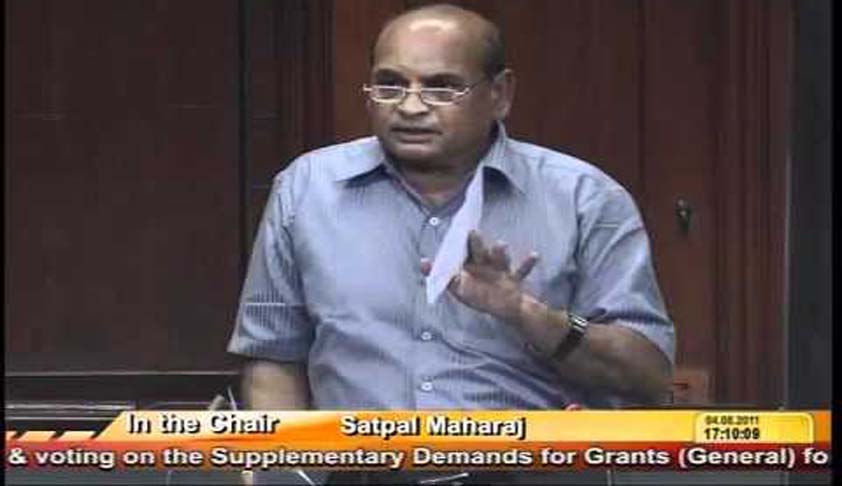 Refusing to suspend the conviction of a BJP MP, the Gujarat High Court on Monday observed that the consequence of disqualification which would follow as a result of such conviction cannot be a ground for staying conviction in a criminal case.“A public servant losing his job which is necessary for his survival has also not to be considered as a ground for exercise of such discretion for stay...

Refusing to suspend the conviction of a BJP MP, the Gujarat High Court on Monday observed that the consequence of disqualification which would follow as a result of such conviction cannot be a ground for staying conviction in a criminal case.

The Court however suspended the sentence awarded to the appellant, Mr. Naranbhai Bhikhabhai Kachhadia. He was ordered to be released on bail on his executing a personal bond of Rs. 10,000/-, with simple surety of the like amount to the satisfaction of the trial court.

It was in the Lilly Thomas Case the Supreme Court held that charge sheeted Members of Parliament and MLAs, on conviction for offences, will be immediately disqualified from holding membership of the House without being given three months’ time for appeal, as was the case before.

The complaint made against Mr. Kachhadia had alleged that he had assaulted Dr. Bhimjibhai Dabhi at Amreli civil hospital on January 1, 2013 for allegedly refusing to attend to a BJP worker’s relative. He was convicted last week, by a lower Court, sentencing him to three years imprisonment.

Mr. Kachhadia had now approached the High Court, demanding suspension of his conviction and sentence. He had referred to the complainant’s testimony, and submitted that it was another person accompanying Mr. Kachhadia, who had actually assaulted the victim.

He had further submitted that Section 332 and 186 of the Indian Penal Code were not attracted in this case, as there is no “obstruction in discharge of duty” by the applicant. He contended that the ingredients for the offences under sections 34 and 114 are also not fulfilled. It was further submitted that the conviction and sentence recorded by the lower court is disproportionate to the offence and the guilt of the accused. He had then pleaded that the conviction was required to be stayed as it would render the applicant disqualified from holding the post of Member of Parliament.

Considering rival submissions, the Court was of the opinion that the appellant’s submission that the ingredients for both the offences under sections 332 and 186 are not attracted is misconceived. He further refused to accept the contention that the conviction should be stayed to avoid the disqualification that would follow.

“The elected Member of Parliament though as a representative of the people may be justified for recommendation for the treatment, but the manner in which he is said to have intervened would not justify. Assuming that the victim had not responded to the phone, it would not justify the assault and manhandling of the victim who is a doctor discharging his duty in the government hospital. Again, there is nothing on record to suggest that the victim had deliberately avoided receiving the phone. Though it could be said that if he has not responded to the phone of the superior, Dr. Shobhnaben Mehta, appropriate measures could be taken, but it would not justify the assault and manhandling amounting to an offence,” the Court observed.

The Court then considered the Question whether the facts of the case justify exercise of discretion on the ground that it would cause prejudice or lead to irreversible consequences as sought to be canvassed?

Answering the above question, it is held as follows;

“Therefore, a public servant losing his job which is necessary for his survival has also not to be considered as a ground for exercise of such discretion for stay of the conviction. Disqualification earned as a Member of Parliament could not be a justification for exercise of such discretion. The Hon'ble Apex Court has considered various relevant aspects including the observations made in the judgment in the case of K.C. Sareen v. CBI [(2001) 6 SC 584] as well as in another case reported in (2003) 12 SCC 434 in the case of Union of India v. Atar Singh. The consistent broad guidelines which have been laid down by the Hon'ble Apex Court clearly provide that an order of conviction should not be suspended merely on the ground that non-suspension of such conviction may entail the consequences like removal of a government servant from service or, as it is stated in the facts of the case, disqualification as a Member of Parliament. It has also been observed that such power should be exercised only in exceptional circumstances where failure to stay the conviction would lead to injustice and irreversible consequences.

“Therefore, when it is talked about good governance, it must reflect upon the democracy and rule of law which in turn has been provided in the Representation of People Act, 1951 providing for disqualification. In other words, while exercising power under sec. 389, the courts have to have regard to the underlying philosophy of the Constitution and democracy which is sought to be achieved through the Representation of People Act, 1951 which in turn has made the provision for disqualification.

A useful reference can also be made to the observations made by the Hon'ble Apex Court in a judgment reported in AIR 2005 SC 688 in the case of K. Prabhakaran v. P. Jayarajan with Ramesh Singh Dalal v. Nafe Singh and ors., where the discussion has been made referring to sec. 8 of the Representation of the People Act that those who break the law should not make the law and the purpose which is sought to be achieved by enacting disqualification on conviction”. The Court added.