Hadiya- We Can't Expand The Scope Of This Case Beyond The Question ‘Whether HC Can Nullify Marriage Between Two Consenting Adults’: SC 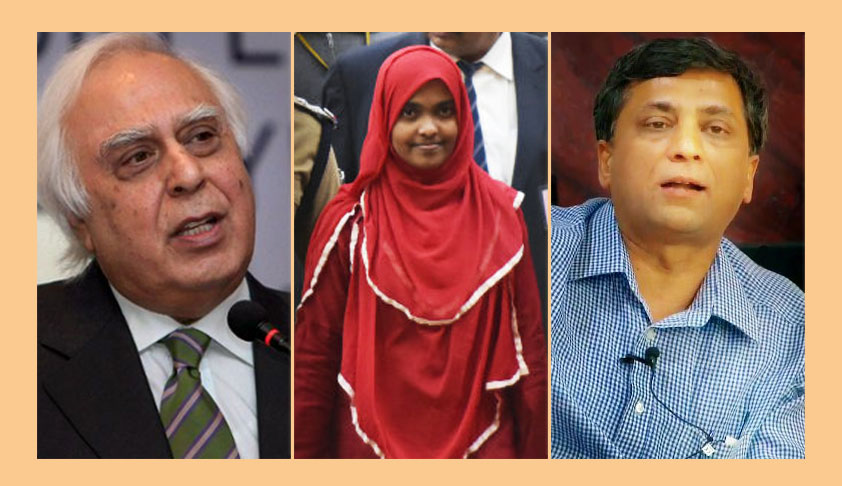 “Can the High Court, in exercise of its jurisdiction under Article 226, nullify the marriage between two consenting adults? The marriage may be illegal or it may be void, but does the High Court have the power? We are only concerned with this question of law”, said the Bench.The hearing in the petition filed against the Kerala High Court judgment, allowing the habeas corpus writ...

“Can the High Court, in exercise of its jurisdiction under Article 226, nullify the marriage between two consenting adults? The marriage may be illegal or it may be void, but does the High Court have the power? We are only concerned with this question of law”, said the Bench.

The hearing in the petition filed against the Kerala High Court judgment, allowing the habeas corpus writ petition filed by Hadiya’s father and nullifying her marriage with Shafin Jahan, commenced on Thursday with Senior Counsel Kapil Sibal, appearing on behalf of Hadiya and her husband Shafin Jahan, submitting, “Nothing remains to be done in this matter. Hadiya has appeared before this court and been interacted with. This court had passed an interim order then. Please pass an order now”.

Chief Justice Dipak Misra remarked, “The issues at hand have been compartmentalised- one, regarding the marriage, which may possibly not have been voluntary; and secondly, the investigation by the NIA, which is not to interfere with the relationship between two consenting adults”.

ASG Maninder Singh, representing the NIA, sought to advance, “The investigation is virtually complete, except for two persons who absconded to Yemen”. The bench also remarked that they are not interested in the allegations levelled against the NIA by Hadiya.

The Chief Justice proceeded to state, “Can the High Court, in exercise of its jurisdiction under Article 226, nullify the marriage between two consenting adults?

The marriage may be illegal or it may be void, but does the High Court have the power? We are only concerned with this question of law”.

The bench of Chief Justice Misra, Justice D. Y. Chandrachud and Justice A. M. Khanwilkar also granted the liberty to transfer Hadiya, freshly impleaded as Respondent no. 9, as Petitioner no. 2. It was also directed that the affidavit filed on behalf of Hadiya on Tuesday shall stand ignored.

In response to the submission by an advocate appearing for Respondents no. 7 and 8, being the Sathyasarini Charitable and Educational Trust and Ms. Sainaba, associated with the Trust and the president of the Popular Front of India’s women’s wing, that the said respondents be allowed to file a counter affidavit and move an application for SIT inquiry in view of the allegations by Hadiya’s father regarding the indoctrination and forceful conversion and marriage of his daughter, the Chief Justice remarked,

“We cannot say what you are doing or are not doing. We cannot broaden the scope of litigation”. “Your concerns are with respondent no. 1 (the father). We cannot deal with them here”, concurred Justice Chandrachud.

“Respondent no. 1 is an innocent person. There are forces behind him...”, insisted the advocate. Cutting him across, the Chief Justice reprimanded, “There has to be a level of arguments in this court”.

At this point, Mr. Sibal said, “Please reserve the order”.

Proceeding to make his submissions, Senior Counsel Shyam Diwan, appearing on behalf of Respondent no. 1, advanced, “In view of the plenary jurisdiction of the High Court under Article 226 and, secondly, on account of the facts and circumstances of the case, the High Court had the power to nullify the marriage”.

Cutting him across, Mr. Sibal interjected, “I have objections to this submission. All these claims regarding IS business...where will this take us?”

Mr. Diwan continued to draw the attention of the bench to the chain of events- “A young adult was sought to be trafficked outside of India...these are extremist groups based in the ISIS territory who employ like persons to serve on the frontline or conduct terror attacks...the women so trafficked are utilised for sexual comfort roles and to raise the next generation of terrorists...the marriage in such cases is only a trap to obstruct justice and conveniently convey an individual outside India”.

“The first writ petition filed by the father was disposed off in January, 2016 by the High Court proceeding on the concept of consenting adults...subsequently, in July, 2016, the father spoke with Hadiya on the phone when she expressed a desire to go to Syria to rear sheep. This conversation he could not record. However, the following day, there was another telephonic conversation which he recorded and where this discussion regarding sheering of sheep in Syria was repeated. The father found such an desire to be beyond the reasonable expectation from his daughter who studying homeopathy. Consequently, he conducted some inquiry and suspected the involvement of a larger organised group...”

“Even if there was any such nexus or connection with a group, the law will take care itself”, intervened Chief Justice Misra.

“The law has taken care under Article 226”, responded Mr. Diwan.

“The second Habeas Corpus Petition was filed before the Kerala High Court on the ground that Hadiya may be compelled to leave the country; there was no question of any marriage at that point. The High Court took cognizance of the petition in the light of newspaper reports than as many as 21 individuals had recently left Kerala following a change of name and religion. I canl show this court affidavits of persons who have crossed this threshold and come back...marriage is only a device to restrain the jurisdiction of the High Court”, continued Mr. Diwan.

“The High Court noted that the marriage was only a ploy to obstruct the administration of justice and also directed the NIA to conduct an investigation locally. I would strongly urge this court to hear the NIA on the reports of its investigation”, submitted Mr. Diwan.

“There are three issues here- one, the government has the power to restrain any citizen from traveling abroad to prevent a prima facie illegality; two, the power of the High Court is wide enough to deal with the concern of trafficking; and three, where the High Court is dealing with a relationship under personal law, can it say that it does not think there was valid consent in a particular case?

That would be over stretching of its jurisdiction”, remarked Justice Chandrachud.

“We have spoken to Hadiya...we cannot comment on if the marriage is in her best interests or if her choice is right...that is for the adult to decide, in respect of which parents may have a persuasive power...we cannot decide that on law”, continued Justice Chandrachud.

Referring to the impugned Kerala High Court judgement, Mr. Diwan advanced, “The judgment was rendered by the High Court in exercise of the parens patriae jurisdiction, not in its strict sense but in respect of a vulnerable adult... the High Court had also interviewed Hadiya and recommended that she complete her education...but then the High Court saw the involvement of a much larger set up, so it has full power (refers to the United Nations definition of ‘trafficking’)...a hearing was held on December 19, 2016 to contemplate on how Hadiya is to pursue her education and the very next day, a strange man appears claiming to be her husband! Now the High Court has the power!”

“Does the factum of the marriage denude the government’s power?”, inquired Justice Chandrachud.

“Does the High Court have the parens patriae jurisdiction to so act?”, asked the Chief Justice.

“Respondent no. 8 has said that she is the guardian of Hadiya who is an adult. Hadiya herself has affirmed the statement. It is suspicious that the woman named Sainaba used to be a complete stranger to her. The High Court had even asked for Sainaba’s income statements as hers did not seem like a family that could accommodate a stranger”, responded Mr. Diwan.

“Can there be an open inquiry into the marital status of two consenting adults? It is not a case of rape, but marriage...in the Suchita case [Suchita Srivastava v. Chandigarh Administration (2009)], it has been held that parens patriae jurisdiction of the court shall not extend to individuals who are mentally retarded; they were distinguished from mentally ill persons... the High Court simply assumes that Hadiya is a vulnerable adult and decides to nullify the marriage? The test of a vulnerable adult is very subjective and the law is averse to subjective notions”, observed the Chief Justice.

“That is not my case at all...the parens patriae jurisdiction is to be very sparingly exercised...the threshold for identifying a vulnerable adult is very high...”, responded Mr. Diwan.

“The father may say that his daughter has been enticed or attracted by extraordinary circumstances. Then comes the role of the law protector...steps like directing investigation can be taken...but the annulment of a marriage?”, noted the Chief Justice.

“If an individual complains that his/her marriage was involuntary, then the court may interfere”, continued the CJ. “That is not the case...”, conceded Mr. Diwan.

At this juncture, Mr. Sibal stood up to object to Mr. Diwan’s submissions- “My learned friend is being unfair to the court and the record...(reads from the transcript of the aforesaid telephone conversation)... the Father has asked leading questions...the father has himself said to Hadiya, ‘the Prophet used to rear sheep so they will you to Syria on the pretext of rearing sheep...if my learned friend presents the facts unfairly then my affidavit should not be ignored”

Scheduling, the matter for further hearing on March 8, the bench ordered that the averments on behalf of Hadiya pertaining to activist Rahul Easwar be expunged. Repeating that Easwar is not a party to the SLP, Mr. Sibal agreed to withdraw the claims.

It may be noted that Hadiya, had on Tuesday, upon her impleadment pursuant to the order dated January 23, filed her affidavit in the present SLP, averring that she has converted to Islam and solemnised marriage with the petitioner out of her own free will.

She had also elaborated on the mental and physical harassment suffered by her during the wrongful confinement at the hostel as well as her parental home and the treatment as a terrorist associated with the IS administered to her by the NIA. She had prayed that the court allow the SLP, appointing her husband as her guardian and permitting her to cohabit with him. She has also prayed that her constitutional guarantees of liberty and freedom of religion be upheld.

On Wednesday, Hadiya’s father and a respondent to the SLP, Asokan KM, has also filed an additional affidavit in response to the counter affidavits filed by the Markazul Hidaya Sathyasarani Educational and Charitable Trust where Hadiya took lessons in Islam and AS Sainaba, the president of Popular Front of India (PFI) women’s wing, who was once Hadiya’s guardian after the girl allegedly left her home to study Islam and later, when she refused in the Kerala High Court to go with her parents.