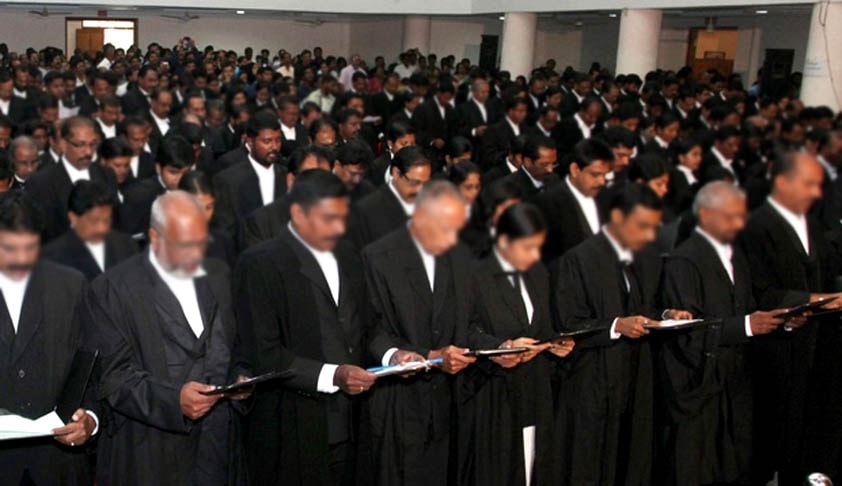 In a landmark judgment, the Supreme Court in Jamshed Ansari vs. High court of judicature at Allahabad & ors (CA No. 6120/16) speaking through Sikri & Ramanna JJ has held that right of Advocates to appear and conduct cases in the court is subject to control & supervision of conduct by the High Court and a bar on practise by advocates other than a set of practitioners on the Roll...

In a landmark judgment, the Supreme Court in Jamshed Ansari vs. High court of judicature at Allahabad & ors (CA No. 6120/16) speaking through Sikri & Ramanna JJ has held that right of Advocates to appear and conduct cases in the court is subject to control & supervision of conduct by the High Court and a bar on practise by advocates other than a set of practitioners on the Roll of High Court was valid.

In an interesting web of legal issues, the matter pertained to interpretation of Sections 30 & 34 of the Advocates Act, 1961, Article 19(1)(g), Article 19(6) and Article 225 of the Constitution. In a nutshell, the chief questions to be answered were that,firstly, whether the rule making power of a High Court under section 34, stretchedupto creating an extra statutory category of Advocates, secondly, whether under administrative law, a rule can bypass a statutory provision and thirdly, whether ‘having a rule making power’ and ‘conditions of its exercise in view of statutory provisions’ are to be read harmoniously?

Section 30 of the Act provides that every enrolled advocate in any state ‘shall’ practise throughout the territories of India subject to other provisions of the Act.Section 34 of the Act states that a High Court ‘may’ make rules laying down conditions subject to which an advocate shall be permitted to practise in the High court and the courts subordinate thereto.The first interesting proposition of law which pops up is whether the statutory limitation on one provision in a statute book towards another can also be extended to the rules framed there under in absence of the use of the expression ‘or under rules framed under the Act’? In my submission, the judgment commits the first error here. It is a well established principle of law that a provision is subject to another provision only if the statute book expressly mentions it and till the time it is made subject to a rule there within, it cannot be presumed to be so.

The challenge in the case pertained to Rule 3 & 3A of the Allahabad High Court Rules (Rules of the Court), 1952. A conjoint reading of the Rules suggests that a separate Roll of Advocates shall be prepared by the High Court and without leave of Court, no advocate can appear/act/plead in the High Court unless he files an appointment along with an advocate who is on such Roll.Section 16(1) of the Advocates Act, 1961 provides that there are two classes of advocates in India; Advocates & Senior Advocates. By virtue of these two Rules, a third categorization gets generated for advocates i.e. Advocates on roll of Allahabad High Court. The argument here is not that a third category per se is bad in law. The Supreme Court has Advocates on Record, the Bombay High Court has Solicitors, the Supreme Court Rules, 2013 even define a ‘junior’ [Explanation iii to Rule 2(b) pertaining to advocates], Section 2(q) of the Code of Criminal Procedure defines a ‘Pleader’ which is non identical to the definition of ‘Pleader’ under Section 2(15) of the Civil Procedure Code. In the instant case however, the rule making power of the High Court under Section 34 and Article 225 of the Constitution is limited to advocates enrolled only in Uttar Pradesh &extends to virtually override statutory provisions creating class legislation not in consonance with the very basis of enrolling as an advocate. Moreover, Section 29 of the Advocates Act, 1961 singularly guarantees a right to practice throughout India to Advocates irrespective of the state of enrolment or ordinary place of practice.

Article 19(1)(g) of the Constitution states that all citizens have a right to practise any profession, occupation, trade or business which is restricted by Article 19(6) in the interests of general public.Article 301 further states that trade, commerce and intercourse throughout the territory of India shall be free.In the judgment, the bench failed to consider that acting and pleading throughout the territory freely is an essential feature of practising as an advocate. The Supreme Court, way back in 1953 understood this even before the 1961 Act was brought in, when in Aswini Kumar Ghosh &Anr v Arabinda Bose & Anr [1953 SCR 1] it was held by a Constitution Bench that a rule made by a High Court which denies to an Advocate the right to exercise an essential part of his function constituted serious invasion of his statutory right to practise.

The term ‘practise’ implies ‘exercise of the profession’. By creating a barrier so as to necessary requirement of a local advocate, the Allahabad High Court has breached both Section 30 and Article 19(1)(g). It is not my contention that the right to practise is absolute, but by virtue of Article 19(6) it can be reasonably regulated only in interests of general public which is further narrowed down by the Proviso (i) which permits state to craft law for professional or technical qualifications necessary for practising any profession. By virtue of Article 22(1) of the Constitution and Sections 41D & 303 of the Code of Criminal Procedure, 1973, a person has a right to be defended by an advocate/legal practitioner/pleader of ‘his choice’. By handicapping an individual and forcing him to choose an advocate to defend him in a court of law from a particular set of practitioners only, the Rules directly attack these provisions.

Subject to my limits of comprehension, the correct recourse would have been to direct the High Court to amend these Rules to the extent that they cannot debar a qualified advocate to act/plead/appear at all without a local counsel. Pre conditions may be drafted, eg to submit enrolment number and Id card before filing in the Registry section so as to avoid any repercussions regarding authenticity but completely debarring advocates not registered in a particular state is violative of the Right to Practise.