Haryana and Beyond: Right to Contest in Elections 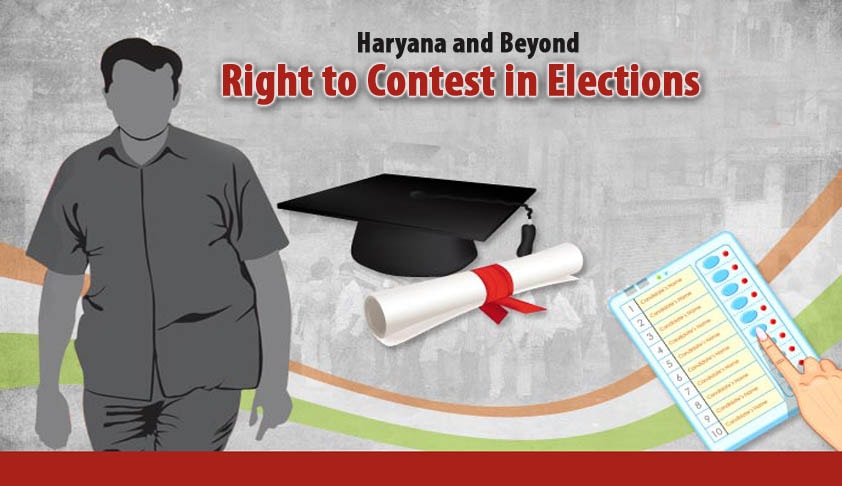 An amendment to the Haryana Panchayati Raj Institutions Act resulted to unwarranted controversy and is now challenged before the Supreme Court of India. The impugned amendment prescribes qualifications for contesting in elections to the local self governments and also holding positions.The Constitution of India directs the Government to take steps to organise village panchayats and also...

An amendment to the Haryana Panchayati Raj Institutions Act resulted to unwarranted controversy and is now challenged before the Supreme Court of India. The impugned amendment prescribes qualifications for contesting in elections to the local self governments and also holding positions.

The Constitution of India directs the Government to take steps to organise village panchayats and also endow them with such powers and authority as may be necessary to enable them to function as units of self-government. It is this direction that government heeded to by enacting the 73rd and 74th Constitutional Amendment.

Art.326 of the Indian Constitution guarantees Universal adult suffrage to all Indian Citizens. The same has been re-iterated in Section 62 of Representation of People Act, 1951. Principle of equality and non discrimination were in the minds of the makers. The earlier administrators imposed qualifications for casting vote in this country. Later, a few were impregnated with the thought that those educated should only form part of electorate of this country. Our constitution makers were of the firm belief in the ability and worth of all adult citizens as ‘equals’ in the matter of deciding what is good for the society and for the country.

Participation of people means participatory democracy. Participatory democracy does not limit itself to mere voting, it includes greater political representation. A broader interpretation is the need. The new Haryana law requires that general candidates must have passed class X examinations while women and Dalit candidates need to have cleared class VIII and V respectively. State like Haryana standing with only 74% literacy and out of which, 2001 census says that only 14.1 % are Matriculates, it would be ‘injustice’ to prescribe a minimum educational qualification for becoming the representatives of people. This can be substantiated with a news story published in September this year with The Tribune narrating ground level reality in Begpur village of Kaithal District of Haryana, where the post of Sarpanch is reserved for a Scheduled caste candidate, is unable to find an SC candidate with the mandatory educational qualifications prescribed in the new amendment. This is not a problem with one Panchayat alone. The new law will stand as a stumbling block over women and people from under privileged sections of society from contesting.

Moreover, strong common sense does not say that education certificates certify wisdom, intelligence or Leader like qualities. The so called certificated educated persons can use pen with confidence and nothing beyond that. A Panchayat President is expected to be the Leader of the local society there. He/she should understand their problems, must empathise with people. It is the wise bureaucracy that is selected from the best in the state runs the day to day administration. As the head of the village administration, he/ she are expected to be a decision maker and a visionary. As a representative and more to that, a leader, a Panchayat president should have ‘wisdom’. Wisdom comes from experience alone. A great visionary like K. Kamaraj Nadar popularised free schooling and introduced mid day meal scheme in Tamil Nadu. He never studied beyond high school. Today mid day meal scheme is implemented all over the country. The dream of a Chief Minister coupled with his will power to implement a scheme overlooking the usual financial burden theory of bureaucracy, is today behind the progress of the small south Indian state.

Government of India’s NCERT asks in a book- What makes an election democratic. It says the answer as well.

1- Everyone should be able to choose. This means everyone should have one vote and every vote should have equal value.
2- There should be something to choose from. Parties and candidates should be free to contest elections and should offer some real choice to the voters.
3- The choice should be offered at regular intervals.
4- The candidates preferred by the people should get elected.
5- Election should be conducted in a free and fair manner where people can choose as they really wish.

The observance of all this made our country one of the most vibrant democracies in the world.

The Supreme Court of India in an assortment of cases has held that Right to contest in election is neither a fundamental right nor a constitutional right. This once again re-iterated decision of the apex court in Javed v. State of Haryana gave confidence to the State of Haryana to take away the right to choice of the electoral public, who comes to take part in the festival of democracy. Right to vote is a part of basic structure of the Constitution, but right to select candidates is not. This seems to this author like an illogical corollary. The same logic applied to Art. 21- Right to Life in some Judgements in the 1950s and 60s makes us to divide constitutional history as before Maneka Gandhi and after Maneka Gandhi. May the apex court not fail us. Indian Parliament, as the legitimate voice of the people of this country, should amend the supreme law of this land and incorporate Right to Contest in an Election a Constitutional Right. Nebil Nizar is a lawyer and an independent researcher based in New Delhi.