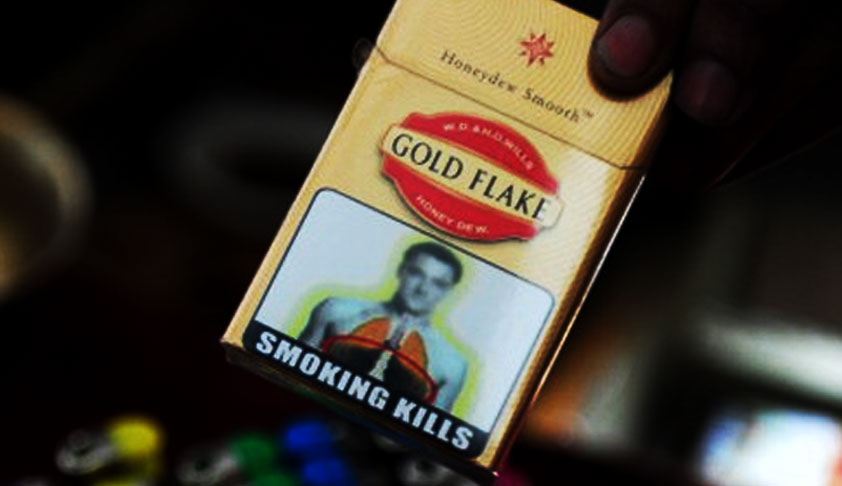 The Supreme Court bench of Chief Justice Dipak Misra, Justice D. Y. Chandrachud and Justice A. M. Khanwilkar on Monday granted an interim stay on the Karnataka High Court judgment dated December 15, 2017 striking down the 2014 amendment to the Cigarettes and other Tobacco Products (Packaging and Labelling Rules) of 2008.Rule 3(1)(b) of Cigarettes and other Tobacco Products (Packaging...

The Supreme Court bench of Chief Justice Dipak Misra, Justice D. Y. Chandrachud and Justice A. M. Khanwilkar on Monday granted an interim stay on the Karnataka High Court judgment dated December 15, 2017 striking down the 2014 amendment to the Cigarettes and other Tobacco Products (Packaging and Labelling Rules) of 2008.

Rule 3(1)(b) of Cigarettes and other Tobacco Products (Packaging and Labelling Rules) of 2008 as amended in 2014, necessitates that the statutory health warning, to be printed on packages of cigarettes, pan masala, and other tobacco products, shall cover at least 85% of the principal display area, constituting an increase from the earlier mandate of 40%. The Rule requires 60% of the space to be devoted towards the pictorial depiction of mouth, throat and lung cancer and 25% to textual health warning.

The amended Rules expressly prohibit the use of even images or pictures on the packages that have the effect of promoting any specific brand or which are inconsistent with the statutory health warning.

The amended Rules also mandate the publication on the packages of particular details, including the name and address of the manufacturer, importer or packer, date of manufacture and origin of the product.

“Life sans health is not worth living and the chewing of tobacco or smoking of cigarettes or bidis etc causes irretrievable hazard to health and it is the obligation of the State to make the people aware as regards the injurious nature of these indulgences”.

Criticising the judgment and order of the High Court, it was urged by Mr. Venugopal, Additional Solicitor General Pinky Anand and Senior Advocates Anand Grover and R. S. Suri that the High Court, on unjustifiable foundation, has struck down the amended Rules, as a consequence of which, the present respondents would be in an advantageous position and would continue to sell such obnoxious and poisonous products in the market with no warning or 40% warning on the packages. It was urged by them that this was a fit case where the apex court should intervene and direct stay of the judgment and order in entirety.

The aforesaid submissions were aggressively opposed by the Senior Counsels Kapil Sibal, C.S. Vaidyanathan and Ashok Bhan, appearing for the respondents, who submitted that the High Court had ultimately agreed for annihilation of the amended Rules for absence of empirical data. It was also propounded by them that grant of stay would tantamount to allowing of the special leave petitions at the stage of notice, which is not called for.

Resisting the submission of the counsels for the petitioners, it was canvassed by them that the pictorial warning which has been projected, is absolutely horrifying.

Finally, it was proposed by Mr. Kapil Sibal, relying on Rule 5 which requires the specified health warnings on the product packages to be rotated after 31st March, 2018, that the top court may fix the size of the pictorial warning at 50% as an interim measure and, thereafter, hear the matter. The said suggestion was seriously opposed by Mr. K.K. Venugopal and other counsels who urged that when a decision has been taken by the Ministry of Health and Family Welfare, fixing the percentage taking into consideration the prospects of health hazard of the citizens on the basis of expert opinion, the Supreme Court should not fix the percentage, but should grant stay of the judgment and order of the High Court.

Ignoring the submissions of the respondents that a stay would adversely affect their business, the bench decided to accord primacy to the health of a citizen and to the need for their sensitisation as to what leads to “destruction of health”.

In view of the objective behind the Cigarettes and Other Tobacco Products (Prohibition of Advertisement and Regulation of Trade and Commerce, Production, Supply and Distribution) Act of 2003, the bench on Monday directed stay of operation of the judgment and order passed by the High Court of Karnataka, listing the matter for final disposal on March 12.