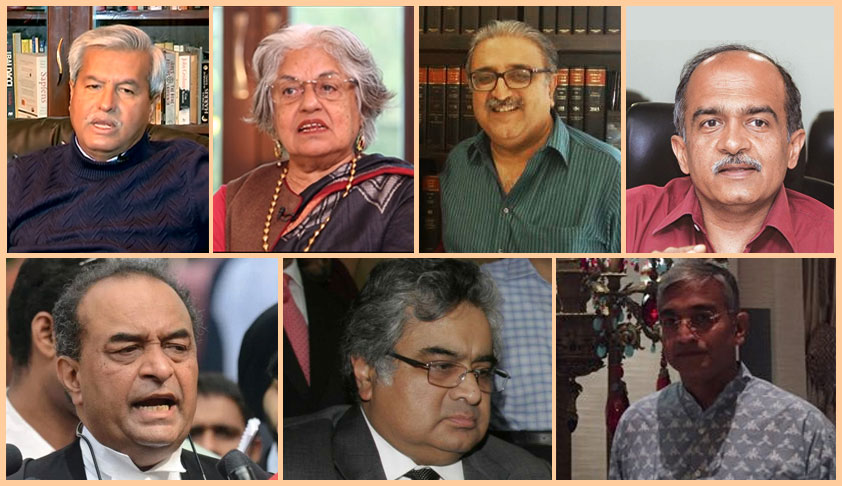 The hearing in the string of writ petitions seeking an independent probe into the death of CBI special judge Loya concluded on Friday, with Senior Counsel Mukul Rohatgi, appearing on behalf of the state of Maharashtra, making his final submissionsIn context of the credibility of the discreet inquiry carried out by the Commissioner of State Intelligence, he submitted before the Supreme...

The hearing in the string of writ petitions seeking an independent probe into the death of CBI special judge Loya concluded on Friday, with Senior Counsel Mukul Rohatgi, appearing on behalf of the state of Maharashtra, making his final submissions

In context of the credibility of the discreet inquiry carried out by the Commissioner of State Intelligence, he submitted before the Supreme Court bench of Chief Justice Dipak Misra, Justice D. Y. Chandrachud and Justice A. M. Khanwilkar,

“The officer who has conducted the discreet inquiry is of the rank of the Deputy Commissioner of Police (DGP)...he is among the senior most officers in the state of Maharashtra”.

In response to Justice Chandrachud’s remark at the previous hearing regarding the vigilance manual, in accordance with which the state had conducted the discreet inquiry, being applicable only to offences of corruption by public servants, Mr. Rohatgi advanced,

“The discreet inquiry carried out in the present case draws a parallel from the anti-corruption inquiry...this was the case of the death of a judge; a similar inquiry could also have been conducted regarding a prominent politician...such inquiries are conducted discreetly so that the subject of the inquiry does not find out”.

Responding to Advocate Prashant Bhushan’s submission, made in reliance on an article dated February 11 published in the Caravan citing the observations of renowned forensic expert Dr. R. K. Sharma (formerly the Head of Forensics Department at the AIIMS, New Delhi) that he had rendered upon examination of judge Loya’s medical reports, Mr. Rohatgi clarified, “the Nagpur Police, after the appearance of the February 11 article in the Caravan, wherein Dr. Sharma has been quoted as opining that the accidental death could not be attributed to a heart attack, has addressed a letter dated February 14 to the AIIMS, New Delhi. Replying to the said letter, AIIMS has conveyed that upon confirmation with Dr. Sharma, he has stated that he has been ‘grossly misquoted on the death of judge Loya by the Caravan’, that the ‘conclusions (cited in the article) are imaginary, that the ‘discussion was general’ and that his opinion as quoted in the article does not subscribe to the medical reports”.

“Please do not believe the publication in the Caravan; it is solely for the purpose of sensationalisation”, remarked Mr. Rohatgi.

Towards the end of the hearing on Friday, Mr. Bhushan stated that Dr. Sharma has been pressurised to say that he was misquoted in the Caravan article. “Dr. Kaul is also receiving many calls ever since I cited his opinion in the court”, he added. He drew the attention of the bench to a transcript of a conversation wherein the story and Dr. Sharma’s quotes had been confirmed with him before publication.

Further, Replying to Mr. Bhushan’s reiteration of renowned cardiologist Dr. Upendra Kaul’s response, on the latter’s examination of the ECG report published by the Indian Express on November 27, 2017 as well as the histopathology report, that the reports do not reveal any evidence of a recent acute myocardial infarction (heart attack), Mr. Rohatgi advanced, “Nagpur Police addressed another letter to Dr. Harish Pathak, Head of Forensics and Toxicology at the KEM Hospital in Mumbai...on the perusal of the Meditrina doctors’ progress report, the autopsy report, Dr. Pankaj Harkoot’s statement (cardiologist at Meditrina Hospital), observations regarding ‘Tall T’ waves in the ECG report, resuscitative measures (at Meditrina), observations of Meditrina doctor Dr. (Ninad) Gawande (whose signature appears on the medico-legal certificate) and several medical books, Dr. Pathak has concluded that judge Loya’s death happened on account of acute coronary insufficiency. He has even stated that the histopathology report does not present different results from the autopsy report”.

“Your Lordships are not making a medical appraisal...you are looking at a sequence of events- on November 29, 2014, judge Loya, accompanied by judges Modak and Kulkarni undertook a train journey to Nagpur. They arrived on the morning of the November 30, spent the day shopping and meeting judges of the Bombay High Court, and attended the wedding of the daughter of a colleague in the evening. At around 4 AM on December 1, judge Loya complained of chest pain at Ravi Bhawan...judges Barde and Waikar were called...he was taken to Dande Hospital where an ECG was carried out...thereupon, on the recommendation of Dr. Pankaj Harkoot, he was taken to Meditrina Hospital where was declared ‘brought dead’ at 6:15 AM...at around 7 AM, Chief Justice Mohit Shah (the then Chief Justice of the Bombay High Court), (Bombay High Court) Justices Gawai, Shukre and Bora also arrived at the Meditrina Hospital...so at 7 AM, there were as many as 9 judges (including judge R. Rathi) present...”

“The second sequence of events lasts from 7 AM to noon- the inquest under section 174 of the Cr. P. C. was carried out in the mortuary...this is only a visual examination by a police officer...because judge Loya was declared ‘brought dead’ by Meditrina, the inquest was followed by a postmortem, which is undertaken by clinical doctors, and the body was sent to Government Medical College, Nagpur...after the postmortem, the body was handed over to Dr. Prashant Rathi who is a distant relative of judge Loya’s...the body was transported from Nagpur to judge Loya’s native village near Latur  for his funeral rites in an ambulance accompanied by two local magistrates...”, he continued.

“Judge Loya’s family chose not to come to Nagpur because he was already dead...they chose to proceed to his village...it was argued (by the petitioners) why an early morning flight to Nagpur was not taken by his family...one cannot reasonably question why on such things...”, remarked Mr. Rohatgi.

Continuing to rebut the claims of the petitioners regarding a substantial portion of the procedure in the discreet inquiry having been completed in one day, he submitted, “the state Intelligence Commissioner’s office is next to the Mantralaya...he was called by the Home Secretary and assigned the job of carrying out a discreet inquiry...he approached the Personal Secretary of the Chief Justice of the Bombay High Court and was granted the permission to ‘record the say’ of the four district judges but not the High Court judges...in a discreet inquiry, no statements are recorded, else it will not be discreet...judge Loya was last seen with the said judges so the Commissioner requested the four district judges to narrate what they remembered of that day...further, if he had sought to record the statements of the judges, it would have been demeaning...”

“Judges Kulkarni and Barde were in Bombay only...judge Modak was in Pune and judge Rathi in Baramati; these two judges wanted a hard copy of the order of the Chief Justice. The Commissioner accordingly sent the hard copy with messengers; it is not difficult for him to send a document by hand...he did not stand on the judges’ head and recorded their say in a dignified manner...”, Mr. Rohatgi elaborated.

“That one of the judges (judge Rathi) says that an ECG was not conducted is not relevant...what is relevant is that all of them state that they were together when judge Loya passed away...also, it has been repeatedly asked why judge Loya was taken to the Dande Hospital which is on the first floor...we are not dissecting and analysing why he was brought to a particular hospital and not to another...there are over 10 hospitals within 5-7 miles of the Supreme Court and one could go to any of them...it may even be questioned why one could not go to the dispensary within the Supreme Court premises instead of waiting for an ambulance that may not arrive in time because of the traffic situation...”, he continued.

Striking at the arguments of the petitioners one by one, Mr. Rohatgi submitted, “The Caravan has claimed that judge Loya was carried to the hospital in an auto rickshaw. Should we believe them or the judge who put him in his car?...Also, it has been contended that a car is always available at a government guesthouse. That is not true...(regarding the contention that the Ravi Bhawan register does not contain judge Loya’s name), his wife has said that she spoke to judge Loya at Ravi Bhawan and that he had told her how busy he had been on November 30, 2014...the magazine had also alleged the involvement of RSS worker Ishwar Baheti (in judge Loya’s funeral). The discreet inquiry report has revealed that there are three persons by the name of Ishwar Baheti at Latur, one of whom was a relative of judge Loya’s...the magazine is entirely irresponsible...”.

“The PILs have been instituted three years after the death...the fourth year has been spent in reconstructing what happened and what could have happened...the aim of these petitions is not to protect the Rule of Law but to target one individual (BJP President Amit Shah)...Senior Counsel V. Giri’s junior (advocate Jatin Sehgal, representing Tehseen Poonawalla) has termed the four district judges as ‘suspects’...Senior Counsel Dushyant Dave has sought to cross examine the district level as well as the High Court judges...it has been prayed that contempt proceedings be initiated against the Bombay High Court Administrative Committee (by Senior Counsel Indira Jaising)...a doubt has also been expressed regarding two of Your Lordships (Justices Khanwilkar and Chandrachud) hailing from the Bombay High Court...these are not arguments for upholding the Rule of Law”, he continued.

Indicating a compilation filed by Mr. Dave on the ‘striking similarities’ in the statements of the two High Court judges and the four district judges, Mr. Rohatgi submitted, “the innuendo is that all the judges are speaking in a parrot like manner under external influence...these are serious allegations against sitting judges...”

“Your Lordships are at the apex of the Indian Judiciary; the Chief Justice is the paterfamilias. Please do not allow anyone to allege anything in the court of law about members of the judiciary...There may be a black sheep everywhere. Chief Justice Misra has himself recommended the impeachment of a Allahabad High Court judge .

If Your Lordships have a doubt, then the registration of an FIR and investigation may be ordered. But this should not become a routine”, he pleaded.

“If an inquiry is directed, the media will have a field day again...statements under section 161 (of the Cr. P. C.) of the 4 district judges, 2 High Court judges and 5 members of the Administrative Committee of the High Court will be recorded...there will also be challenges under section 482 (of the Cr. P. C.) and Article 226...this is not a lis between the government and a private individual...this is not a murder appeal that the ‘last seen theory’ has been debated...”, he concluded.

At the end of the hearing, Ms. Jaising requested that since, before the apex court, only the issue of the death of judge Loya has been argued, and the other prayers regarding investigation into his death and the death of an advocate (lawyer activist Shrikant Khandalkar) have remained uncovered, the latter may be transferred back to the Bombay High Court. It may be noted that the Supreme Court had earlier transferred to itself the writ petitions filed before the Bombay High Court by the Bombay Lawyer’ Association and one Suryakant Lodge. Mr. Rohatgi opposed this plea, asserting that “everything has been heard”.