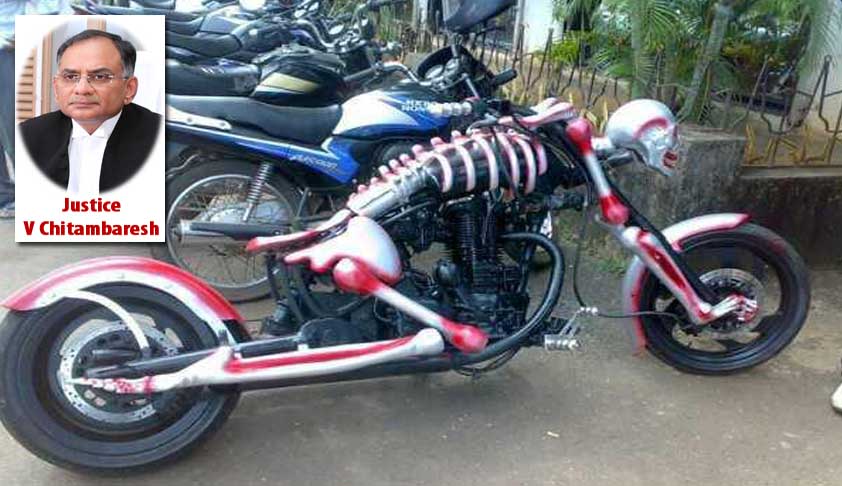 The High Court of Kerala in Francis M.C v State of Kerala and Others[W.P(C)No:7045/2016], has directed the State transport department and State police machinery to take stringent action against those persons who ply motor vehicles with customized modifications in violation of motor vehicle act/rules. The customized modifications pertain to the alteration of motor cycle parts like removal...

The High Court of Kerala in Francis M.C v State of Kerala and Others[W.P(C)No:7045/2016], has directed the State transport department and State police machinery to take stringent action against those persons who ply motor vehicles with customized modifications in violation of motor vehicle act/rules. The customized modifications pertain to the alteration of motor cycle parts like removal of silencers, mud guard and sari guard etc. The court observed that such removal in a bid to add glamour to the vehicle, possessed danger to the public, which the users are unmindful.

The Petitioner through his counsel Mr B.H Mansoor, had approached the court against the withholding of the certificate of registration of his vehicle by the Motor Vehicles Inspector, and further to quash the check report issued against him in this regard. The inspector had intercepted the motor cycle of the petitioner on 18-02-16 , after the motor cycle was found ‘fitted with a silencer that produced harsh heavy shell noise causing sound pollution and the original hand bar was replaced with a non standard one’ appearing like a pipe alleging gross violation of Section 52 of the Motor Vehicles Act,1988 and Rule 120 of the Central Motor Vehicle Rules,1989. The inspector, after issuing a check report, directed the petitioner to rectify the above defects. As a pre condition to comply with the above directive, the certificate of registration of the vehicle was withheld.

The relevant statutory regulations, include Section 52 of the Motor Vehicles Act, 1988 which prohibits alteration of motor vehicles against standards prescribed under the act. It is further stipulated under rule 120 of the Central Motor Vehicle Rules, 1989 which provided as follows:-120. Silencers.—(l) [Every motor vehicle including agricultural tractor] shall be fitted with a device (hereinafter referred to as a silencer) which by means of an expansion chamber or otherwise reduces as far as practicable, the noise that would otherwise be made by the escape of exhaust gases from the engine. It is further provided under Rule 120(2) that every motor vehicle shall be constructed and maintained so as to conform to standards prescribed under the Environment (Protection)Rules,1986 when tested.

The Court speaking through Justice V.Chitambaresh after examining the relevant statutory provisions , opined that the vehicle plied by the petitioner which was found fitted with a silencer that produced harsh heavy shell noise with a thunder effect causing sound pollution violated standard conditions prescribed under Section 52 of the Motor Vehicles Act,1988 and Rules 120(1) &(2)of the Central Motor Vehicle Rules,1989. The bench arrived at the Judicial reasoning in the following words:-“Replacing of standard handle bar of the motor bike with a tube like handle to add glamour to the vehicle is also a serious step which may perhaps affect equilibrium of vehicle even. Such replacement amounts to alteration of the motor vehicle in variance with the particulars contained in the certificate of registration and originally specified by the manufacturer. Similar is the case when mudguards are removed to expose the beauty of the naked tyres and fitment of seats to give the effect of theatre sitting in a slant position not specified by manufacturer.”

The Bench thereafter directed the State to issue appropriate directions to the Inspectors of Motor Vehicles Department as well as Police to bestow their attention to ensure the standardization of vehicles so customized on the following lines:-  “Any variation in terms of Section 52 of the Act like removal of the silencer or mudguard shall be viewed seriously and appropriate action taken under the Act. Thunderous noise emanating from the motor cycles deafens the ears and also poses a serious health hazard especially to the ailing and aged commuters on the road. The sound level has to be brought down to the decibel limits prescribed under the Environment (Protection) Rules, 1986 in order to abate the sound pollution. Shorter handle bars which may look slim and sleek cannot be permitted to replace the standard one prescribed lest the equilibrium of the vehicle is affected. A mudguard less motor cycle will splash dirt not only on the rider but also on the persons nearby and the vehicle cannot be permitted to shed its vital parts in order to enhance its beauty. Theatre seating with a heavy slant not prescribed by the manufacturer with the handle of the pillion rider removed will throw him into the air for the slightest jerk. The removal of the handle of the pillion rider or the sari guard should not be permitted and standard glare free headlight shall not be permitted to be replaced by a glittering one”.

The Court after having arrived at the above conclusion regarding violation of standard conditions for the vehicle and issuing measures/ directives to rectify the same, however upheld the arguments regarding illegal withholding of the certificate of registration of the vehicle by the Inspector , holding that the same was illegal and impermissible as per law. The court thereupon ordered the release of the certificate, however subject to a pre condition to cure the defects as pointed out by the Inspector.