High Courts of the country enter 2015 with 35% vacancies; Allahabad HC functioning with 50% of approved strength of Judges 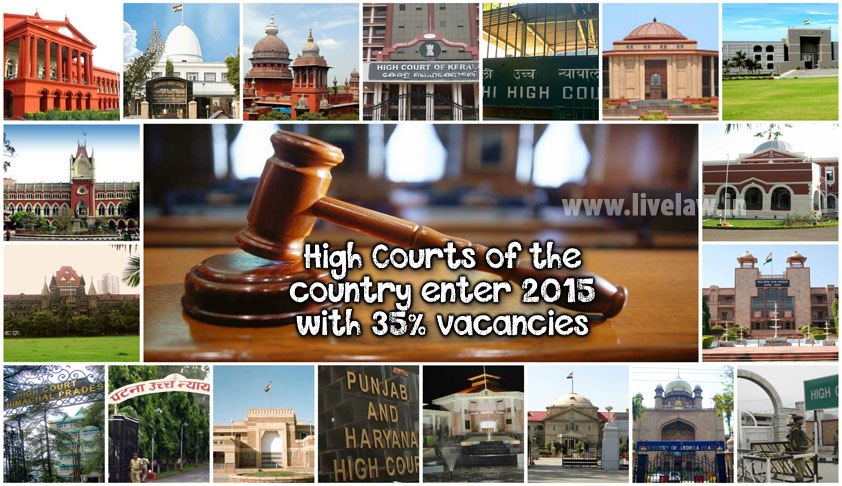 Vacancies in the High Courts all over India have been a major attribute of the ever mounting backlog of cases. As on 1st January, 2015, there are a total of 345 vacancies in the 24 High Courts across the country, being a clear indicator of the lack of manpower in the sentinels of justice across the country.The following graph shows the approved strength, the working strength and the vacancies...

The following graph shows the approved strength, the working strength and the vacancies in the High Courts across the country:

A perusal of the graph will show that Allahabad High Court has the largest number of vacancies, standing at 80. Allahabad High Court hence, is just working at half its strength presently, thereby accounting for the maximum pendency of civil and criminal cases pegged at 6, 96,795 pending cases, as on 1st January, 2015 (combining the cases at Allahabad and Lucknow.

Manipur High Court and Sikkim High Court is functioning with 1 vacancy each.

The pie Chart below shows the vacancies in each High Court as a percentage of the total vacancies:

The Chart clearly indicates that Allahabad High Court accounts for the largest percentage of vacancies, the least being that in Meghalaya High Court and Tripura High Court.

Punjab and Haryana High Court has the second largest approved strength, but is working with 67% of that strength.

A different approach to handle the backlog of cases was taken by former Chief Justice of India, R.M. Lodha. In the beginning of this year, soon after assuming the highly regarded post of the Chief Justice of India, Justice R.M. Lodha stunned the country with his revolutionary vision of a speedy and free justice delivery system, which works “365 days a year”. While addressing the legal fraternity in Jodhpur at the foundation-stone laying ceremony of a Bar Council of Rajasthan building, he drew parallels between the justice delivery system and other requisite services like the medical & health facilities. He added that, “Law and justice field has its dignity and it must be maintained in order to keep the trust of the people in judicial system”.

However, the entire legal fraternity had expressed doubts over the implementation and practicality of the order and opposed the idea. Read more news about the proposal here.

CJI Lodha’s successor, CJI Dattu has however taken a different approach to the menace and ordered the filling up of vacancies as soon as possible.

With the High Courts functioning at 64% of their approved strength, the dream for reducing the pendency of cases is unlikely to materialize in the near future.