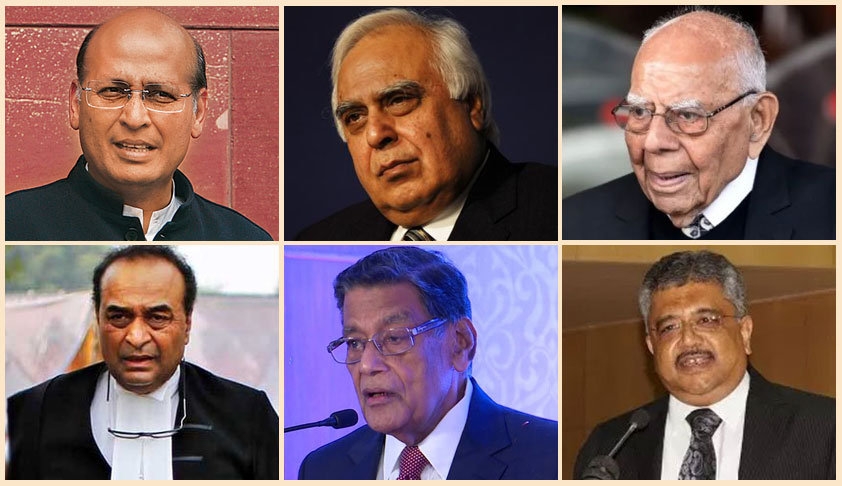 The hearing on Friday commenced with Attorney General K. K. Venugopal submitting before the Supreme Court bench of Justices A. K. Sikri, S. A. Bobde and Ashok Bhushan that the letters addressed by BJP Chief Ministerial candidate B. S. Yeddyurappa to Governor Vajubhai Vala asserting majority have been produced.Senior Counsel Mukul Rohatgi, appearing on behalf of the BJP, submitted, “after...

The hearing on Friday commenced with Attorney General K. K. Venugopal submitting before the Supreme Court bench of Justices A. K. Sikri, S. A. Bobde and Ashok Bhushan that the letters addressed by BJP Chief Ministerial candidate B. S. Yeddyurappa to Governor Vajubhai Vala asserting majority have been produced.

Senior Counsel Mukul Rohatgi, appearing on behalf of the BJP, submitted, “after the first letter of May 15, a second letter dated May 16 was sent to the governor stating that the BJP has emerged as the single largest party...that I also have the support of others...hence, I request you to invite me to form the government...”

“I have the majority and I shall prove it on the floor of the house...the place to do that is not the courtroom...there is no requirement for me to give any names as to who will support me...The criterion as laid down by the Sarkaria Commission is that of the single largest party having the majority with the support of others including independents...The nutshell is the mandate of the people...”, he added.

He mentioned that the judgment of the Supreme Court seven judge bench in S. R. Bommai (1994) lays down guidelines to regulate the discretionary power of the Governor.

“You claim to be the single largest party having the required support...this is subject to verification...there is also the letter by the Congress...where one is only claiming and the other is proving, how is the Governor to decide?”, remarked Justice Sikri.

“It his job to exercise his discretion in ensuring a stable government...his role is only to check the ground realities...that here is one party that has been thrown out and there is the other party having the mandate of 95% people...”, responded Mr. Rohatgi.

“The Congress list contains the names of some 79-80 persons...it is not signed...based on the instructions of certain MLAs, I believe the signed document was never given to the governor...if it so, then this petition may not proceed...”, he continued.

“The main issue is that if two positions are jostling and the governor exercises discretion under Article 164, then the final fight shall be at the floor of the house...”, stated Mr. Rohatgi.

“That is true...but who enters first is the question”, noted the bench.

“As per the Sarkaria Commission Report, there is no dispute when any party having majority is to form the government...the dispute arises when no party has the majority...this exercise has to carried out objectively and the Governor must satisfy [unclear]...”, continued the bench.

“Pre-poll alliance is placed at the highest wrung as the voters knew this alliance was projecting itself...as far as the post poll alliance is concerned, it is kept at a lower level than the single largest party, as the voters had no idea they would come together...it is about rationality...”, explained the bench in the light of the Sarkaria Commission Report, reiterating, “but there is no dispute that two parties claiming majority have to battle it out on the floor...”

“There are two alternatives- first, that we hear at length and decide on the correctness of the Governor’s action to invite BJP and not the INC-JD(S)-BSP alliance to form the government; and second, that we direct the floor test to be held tomorrow itself and we do not allow any time to anyone...”, suggested the bench.

At this point, Senior Counsel A. M. Singhvi interjected, “whether he is called first or I am called first, the floor test is a given...the question is whether the Governor was justified in his act...what was the game plan? The intent was to cause a delay of 15 days...”

“We are not objecting to deciding on the correctness...let there be a floor test, while we keep the larger issue open...if we are to hear now and pass a judgment, precious time would be lost, even if you get the judgment in your favour...”, affirmed the bench.

“I am the governor, I receive 117 signatures along with a letter from the Congress...Yeddyurappa says that they are crossing the majority with support from ‘others’...he says that he has 104 seats with 7 ‘others’...a mere ipse dixit of ‘others’ cannot suffice...the interpretation of the Sarkaria Commission recommendation cannot be that any single largest party asserts majority without giving any details, seeks a window and still insists on being invited...this cannot and should not be the law of interpretation...can any Governor in such circumstances say that he has applied his mind and that 5 is bigger than 6?”, argued Dr. Singhvi.

He added that the floor test should be conducted forthwith and with adequate security. “If it is to be held tomorrow morning, then it should be carried out without any delay”, he submitted.

Senior Counsel Kapil Sibal, representing petitioner H. D. Kumaraswamy of JD (S), intervened, “there is no such thing as the discretion of a constitutional authority...the tests, if there is no party with clear majority, are of the single largest party with support, and if there is no requisite support, then of the post poll alliance...the discretion is subject to the constitutional law and the law laid down by the court...the letter confirms that support is being extended...now the governor has to apply his mind...there cannot be any constitutional immorality in interpreting discretion...”

“So far as the court is concerned, we are here to uphold the law and the constitution...discretion may be exercised in hard cases, but in cases where the facts and circumstances speak for themselves, there is no discretion...”, remarked the bench.

When the bench sought to indicate the 2006 judgment in Rameshwar Prasad, Mr. Sibal advanced, “that is different...now the Governor knows that support is possible only through the Congress or the JD(S)...there is no other option...and they have already signed...”

“The governor never received this signed letter...the list was downloaded online that these are the 78 Congress MLAs...”, added ASG Tushar Mehta.

“The Congress has passed a resolution extending support to the JD(S) and that is on record...”, countered Mr. Sibal.

“Every executive that is sworn in must prima facie have the support of the majority...this principle has to be borne in mind by the Governor while exercising his discretion under Article 164(3) before the Chief Minister is sworn in...”, he asserted, pressing for an immediate floor test and no permanent speaker.

“Sarkaria (Commission Report) suggests a period of 30 days, which is excessive, and 15 days (as granted by the Governor in the present case) seem to be...there should be reasonable time...the floor test cannot happen tomorrow...(‘we have to balance the equities’, observed the bench)...the balance cannot be one day...it should be atleast one week so people can come and freely vote...”, advanced Mr. Rohatgi.

Veteran lawyer and Senior Advocate Ram Jethmalani also made a brief submission on his intervention-in-person, criticising the action of the Karnataka Governor and praying that the bench uphold the rule of law.

No Longer Have That Physical Energy But Couldn’t Keep Quiet Seeing What The Karnataka Governor Has Done: Jethmalani To SC

When the bench proceeded to direct the floor test to be held on Saturday afternoon, Mr. Rohatgi attempted to persuade them to schedule it for Monday, pleading, “people have to talk in concert...there are MLAs locked up in Kochi...”

He also sought to advance a submission in respect of the 2005 judgment in Anil Kumar Jha relied upon in context of the appointment of the Anglo Indian member under Article 300, When Senior Counsel P. Chidambaram prayed that no member of said community may be sworn in until the floor test.

Ultimately, the bench directed that the floor test be held at 4 PM on Saturday; that a Protem Speaker shall decide the mode of the test; that there shall be no secret ballot; that the B. S. Yeddyurappa government shall not take any major policy decisions until the floor test, nor shall the Anglo Indian member be sworn in; and that the Karnataka DGP shall ensure the security of the MLAs

Since it may consume substantial time and the final decision cannot be given immediately, we deem it proper that Floor Test to ascertain the majority of one or the other group is conducted immediately and without any delay. Though the Governor in his letter dated 4 16.05.2018 inviting respondent no.3 to form the Government has given him 15 days' time for proving the majority on the floor of the House, having regard to all the circumstances of this case, we are of the view that such a Floor Test be conducted tomorrow itself i.e. on 19.05.2018. Since the elected Members of Legislative Assembly are yet to take oath as specified in Schedule III of the Constitution and the Speaker is also yet to be elected, we are of the view that the following procedure be followed for conducting the Floor Test:

A). Pro-tem Speaker shall be appointed for the aforesaid purpose immediately.

D) Adequate and sufficient security arrangements shall be made and Director General of Police, State of Karnataka will himself supervise the said arrangements so that there is no lapse on this count whatsoever.