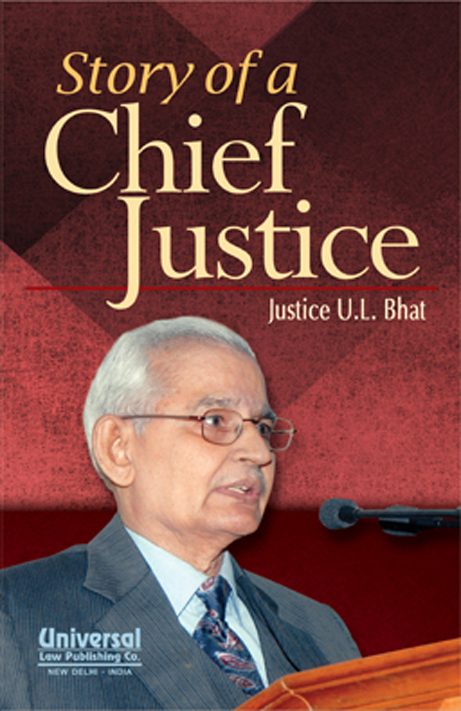 Story of a Chief Justice is the autobiography of U L Bhat, a judge par excellence. He was acting Chief Justice of Kerala High Court and Chief Justice of Guwahati and Madhya Pradesh High Courts. A judge, after retirement, need not sink into oblivion. His recorded experience as a judge is a valuable treasure for those who follow him. Judges’ autobiographies form a significant portion of useful legal literature. The Supreme Court and the High Courts are courts of record. Not only the judgments but also the unrecorded experiences of the judges should form part of that record. Justice Bhat, by writing a luminous story of his adventurous voyage through the seamless terrain of law and legal adjudication, has made a substantial and beneficial contribution in that area.

Bhat, after a decade long illustrious career as a District and Sessions Judge, was appointed Judge of the High Court of Kerala in 1980 and remained there for more than eleven years. As a novice in the legal profession, I used to sit long hours in his court watching and learning the niceties and intricacies of judicial process. His incisive batting with lawyers was a remarkable learning experience for the observing lawyers.  As a legal correspondent for The Hindu, UNI, Malayala Manorama and Deshabhimani, I had the unique opportunity of perusing his freshly delivered judgments for the purpose of reporting. Going through his 440-page autobiographical reminiscence, I could vividly recollect many instances and episodes narrated by the author because I was a witness to those at the time of happening.

Bhat was a judge in the classical mould, always abiding but never succumbing. Law of evidence was his forte and he was adept in ingeniously appreciating it. In chapter 16 of the book, he narrates a few interesting cases decided by him as a sessions judge. The Madhavan murder case, decided by him at Palakkad during emergency, is a case, which stands apart. The prosecution established the case on the basis of convincing evidence; but the judge on the basis of an inexplicable intuition, acquitted the accused. A few months later, the dead man, after a penurious sojourn, surfaced. It was like the intuitive finding of Sherlock Holmes in the story of the Norwood Builder. Murder without bloodstains is another such case.  The Grisham-like twists in the tale will make the reader wonder-struck.  The author rightly remembers the maxim: Men may lie but not circumstances. For this a judge should be skeptical. Bhat had this in abundance despite his sobriquet as a convicting judge.

Bhat was eminently fit to adorn the Supreme Court but he narrowly missed the bus. It, as observed by Justice K T Thomas, was a great loss to the Supreme Court. His tenure in the Kerala High Court, along with several luminaries, was memorable in the annals of that court. It was before the advent of the collegium system for the selection of judges. Judges with communist or socialist background were experimenting with law as an instrument of social justice and tool for social engineering. The tilt was towards the oppressed and the deprived. They were interpreting the Constitution in such a way as to make it people-friendly. Bhat particularly acknowledges his association with Justices Subramanian Poti and M P Menon. Justice Poti had the unique privilege of acting as Chief Justice for 32 months before becoming Chief Justice of Gujarat High Court. Justice Bhat himself was a victim of his communist background. Though selected as Munsiff by the Public Service Commission in 1961, appointment was denied for political reasons.

It is impossible for an author to remain on the sidelines while writing an autobiography. Shorn of autobiographical details, the book can be used as a textbook for students of law, lawyers and judges. Lawyers are persons who write a 10,000-word document and call it a brief. On the basis of this universal phenomenon and by the nature of its narration, Justice Bhat’s story has become a little obese. A careful editorial pruning would have made the book more readable and academically useful. But the reader has always the freedom to skip pages. Judges have the habit of writing lengthy obiter rather than presenting a precise ratio. Justice Bhat used to write a terse summary of his finding at the end of the judgment, enabling the lawyers and reporters to understand at a glance, what the judge has said. "Together with "Relevancy, Proof and Evaluation of Evidence in Criminal Cases" published by Universal , Story of a Chief Justice will find an ostentatious and honourable position in our law libraries.

Dr. Sebastian Paul is a Supreme Court Lawyer and former Member of Parliament.