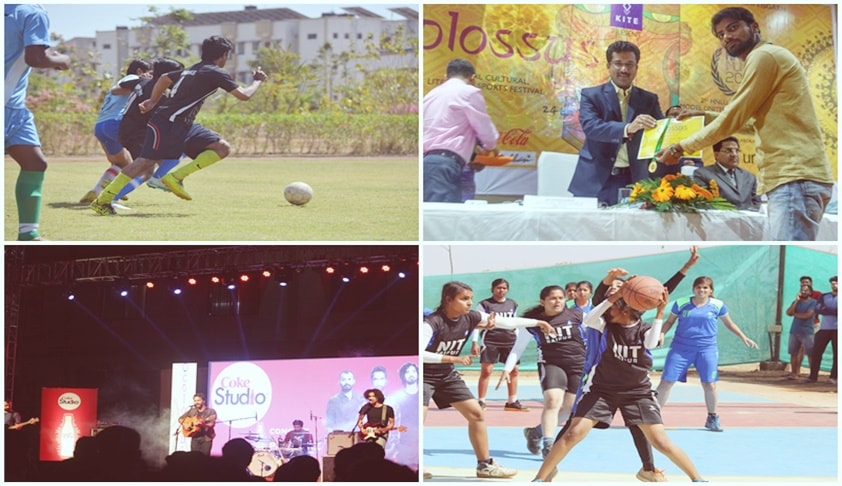 Colossus 2017, the annual sports, cultural and literary fest of the Hidayatullah National Law University, concluded on the 26th February, 2017 with a valedictory ceremony in august presence of Mr. Sonmoni Borah, Secreatary, Department of Sports and Youth Welfare and Department of Social Welfare and Hon’ble Vice Chancellor of the University. More than 700 participants, marked their presence...

Colossus 2017, the annual sports, cultural and literary fest of the Hidayatullah National Law University, concluded on the 26th February, 2017 with a valedictory ceremony in august presence of Mr. Sonmoni Borah, Secreatary, Department of Sports and Youth Welfare and Department of Social Welfare and Hon’ble Vice Chancellor of the University. More than 700 participants, marked their presence at the event spanning 30 universities and colleges across India.

The three day long fest started on the 24th of February in the presence of Mr. Derk Segaar, Director, UN Information Centre for India and Bhutan, chief guest for the occasion. He stressed on the Sustainable Development Programme and vision 2030, and India’s role in it especially with reference to peace and conflict, big mega trends like food-safety, over population, migration etc.

Hon’ble Vice Chancellor Prof. (Dr.) Sukh Pal Singh, stressed on the importance of extra-curricular activities and described Colossus as a platform provided by University to develop over all personality which is required for the excellence in life. “Education is a weapon to change the world and it is the way to develop the sense of brotherhood” he stated. The fest was a three day event which also included the 2nd edition of HNLU International Model United Nations. The delegates deliberated on national as well as international issues ranging from the recent demonetization move at the National level to the Syrian Crisis at the international level. The most innovative part of the IMUNC was the introduction of UNICEF committee in which 30 specially-abled participants deliberated on the agenda of ‘Inclusion of Children with Disability in Policy Formulation’. It is noteworthy that this inclusion of specially-abled children in any conference has happened for the first time in the history of MUNs in India. This idea being conceptualised by the Hon’ble Vice Chancellor Prof. (Dr.) Sukh Pal Singh, has been appreciated not only in India but abroad as well. Hon’ble Vice Chancellor also assured them to convey their suggestions to the Government of Chhattisgarh.

Another attraction of Colossus 2017 was the Stand-up by Shivam, Himanshu Uikey along with a rib-tickling host performance by Shreyas Negi.

IDIA, the CLAT trainer for the economically weaker students had set up a stall with the help of its student volunteers at HNLU, who served different dishes, the profits of which they would donate to IDIA fund for weaker students.

Battle of Bands, was judged by Mr. Rohit Lalwani of ‘Lal and the People’ and was won by the band ‘Brazen Molok. Hemant Vishwakarma emerged as the champion of the Solo Dancing category whereas the group category was won by the team from JNM Medical College. In the Solo Music singing event, Pratik Hola of JLU Bhopal bagged the first prize.

The second day of Colossus 2017 concluded with a mesmerizing performance by Coke Studio featuring the famous band ‘Parvaaz’ which was given an opening score by the band ‘Lal and the People’.

The third and the last day of the fest finally concluded with a valedictory ceremony on Sunday, the 26th of February, 2017 in the august presence of Mr. Sonmoni Borah, Secreatary, Department of Sports and Youth Welfare and Department of Social Welfare and Hon’ble Vice Chancellor of the University, who observed the importance of Sports and Cultural activities important for the physical and mental well being of human being and said that, “healthy mind resides in healthy body and such activities are the best way to achieve this.” He also added that we have started saying only “beti bachao, beti padhao” but we should also focus on “beti khelao”.

From the Sports Events:

In LAN gaming, Counter Strike and NFS Most Wanted was won by the team from IIIT, FIFA was conquered by Mr. Elvis Joseph of AIIMS Raipur whereas the prize for Mini Militia, the mobile gaming event, was won by HNLU’s home team.

The DJ Night by DJ Akbar Sami was the main attraction of the third day which was a perfect end to what has been a fantastic three day event that was Colossus 2017.
TagsHNLU Colossus
Next Story
Similar Posts
+ View more
Law Firms
+ More