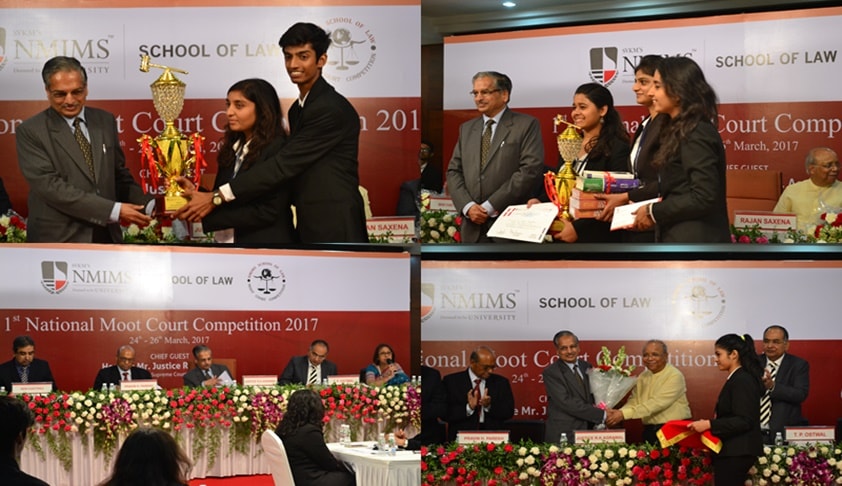 1st National Moot Court Competition brought to you by SVKM's NMIMS School of Law kicks off with promising hope in an entailing and flamboyant inauguration ceremony. Bedazzled with young, talented, excited and promising contestants from all over the country NMCC looks assured of immense success. The esteemed dignitaries involved–the vice chancellor, Dr. Rajan Saxena, the Dean of NMIMS School...

1st National Moot Court Competition brought to you by SVKM's NMIMS School of Law kicks off with promising hope in an entailing and flamboyant inauguration ceremony. Bedazzled with young, talented, excited and promising contestants from all over the country NMCC looks assured of immense success. The esteemed dignitaries involved–the vice chancellor, Dr. Rajan Saxena, the Dean of NMIMS School of Law, Dr. Rishikesh Dave, professor of NMIMS SOL, Dr. Rahul Nikam and the Chief Guest, Dr.Abhishek Rastogi, partner, Khaitan & Co. Who arrived at the ceremony bringing about motivation in the participants and a sense of pride in the OC. This was followed by lighting of the lamps along with the customary Saraswati Vandana which is always a sure shot to bring us success under guidance of Saraswati.

The stage was first donned by Dr. Rahul Nikam, professor at NMIMS School of Law and NMCC's faculty coordinator who’s been the driving force behind this event and is the crux of its success. Dr. Rahul Nikam empowered the participants with his words of wisdom and also encouraged them to explore and exhibit their talent and potential at NMCC. What followed was a Beautiful but powerful welcoming address by Dr.Rishikesh Dave, Dean of NMIMS School who has been the backbone of the entire event. His speechthat boosted the confidence of the participants through the roof was applauded. The Dean then informed the participants about the prize money for the winning team along with the sponsored internship with Nishith Desai and Associates and Economic Law Practices that entails an array of opportunities.

After two empowering and motivating speeches, the vice chancellor Dr. Rajan Saxena took over the stage and started off by applauding and praising the OC and the entire School of Law on their fruitful efforts on making the brainchild that is NMCC a blockbuster of an event. He then went on to describe moot court competitions to be a platform for creation of new ideas and a cradle of budding lawyers and a catalyst that fosters team spirit. The buck was then passed on to Dr. Abhishek Rastogi who was humbly requested to share a few motivating words and vitalise the participants. He was very eloquent on the subject of mooting and described it to be a tad bit different from litigating in courts. Subsequently, he then shared his experience and also suggested some mooting mantras to be followed and looked upon during the competition. Last but not the least, the ceremony was ended by a vote of thanks by the hardworking and utterly talented vice chairperson of NMCC, Aayesh Gandhi.

At about 5:30 in the evening of an already exciting day, registration procedures commenced and the moot memorial exchange took place to supplement the following day’s comprehensive mooting in the preliminary rounds. The participants engaged in conducive and fructiferous interactions among themselves while munching on snacks and tea. Thereby after an hour, the participating teams were briefed about the marking scheme of the moot court competition and their queries were amicably answered by the organising committee. All further details about the accommodation and dinner were also brushed upon.

Followed by second day where all the participants were tensed and performed well in prelim rounds. All were grilled and were trying their best to keep their point. And then finally after the battle 8 teams made their space in quarter finals and then began the rounds.

The proceedings began and ILS and HNLU were set to give their 100%. The judges were impressed the way young minds think and how nicely they put forth their point.